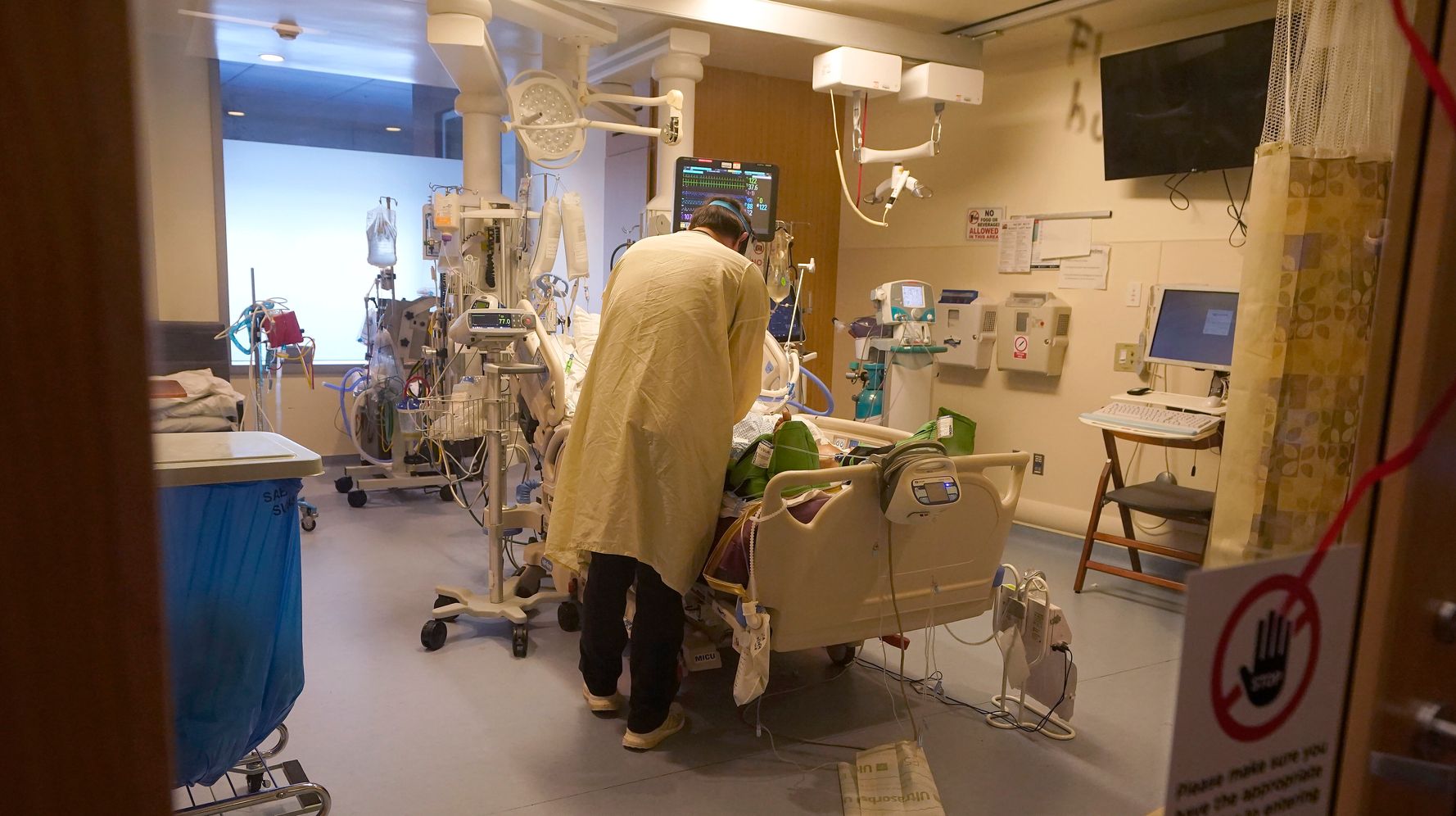 Straining to handle record numbers of COVID-19 patients, hundreds of the nationâ€™s intensive care units are running out of space and supplies and competing to hire temporary traveling nurses at soaring rates. Many of the facilities are clustered in the South and West.

An Associated Press analysis of federal hospital data shows that since November, the share of U.S. hospitals nearing the breaking point has doubled. More than 40% of Americans now live in areas running out of ICU space, with only 15% of beds still available.

Intensive care units are the final defense for the sickest of the sick, patients who are nearly suffocating or facing organ failure. Nurses who work in the most stressed ICUs, changing IV bags and monitoring patients on breathing machines, are exhausted.

â€œYou canâ€™t push great people forever. Right? I mean, it just isnâ€™t possible,â€ said Houston Methodist CEO Dr. Marc Boom, who is among many hospital leaders hoping that the numbers of critically ill COVID-19 patients have begun to plateau. Worryingly, thereâ€™s an average of 20,000 new cases a day in Texas, which has the third-highest death count in the country and more than 13,000 people hospitalized with COVID-19-related symptoms.

According to data through Thursday from the COVID Tracking Project, hospitalizations are still high in the West and the South, with over 80,000 current COVID-19 hospital patients in those regions. The number of cases reported in the U.S. since the pandemicâ€™s start surpassed 25 million on Sunday, according to Johns Hopkins University.

Encouragingly, hospitalizations appear to have either plateaued or are trending downward across all regions. Itâ€™s unclear whether the easing will continue with more contagious versions of the virus arising and snags in the rollout of vaccines.

In New Mexico, one surging hospital system brought in 300 temporary nurses from outside the state, at a cost of millions of dollars, to deal with overflowing ICU patients, who were treated in converted procedure rooms and surgery suites.

â€œItâ€™s been horrid,â€ said Dr. Jason Mitchell, chief medical officer for Presbyterian Healthcare Services in Albuquerque. Heâ€™s comforted that the hospital never activated its plan for rationing lifesaving care, which would have required a triage team to rank patients with numerical scores based on who was least likely to survive.

â€œItâ€™s a relief that we never had to actually do it,â€ Mitchell said. â€œIt sounds scary because it is scary.â€

In Los Angeles, Cedars-Sinai Medical Center ran into shortages of take-home oxygen tanks, which meant some patients who could otherwise go home were kept longer, taking up needed beds. But the biggest problem is competing with other hospitals for traveling nurses.

â€œInitially, when the COVID surges were hitting one part of the country at a time, traveling nurses were able to go to areas more severely affected. Now with almost the entire country surging at the same time,â€ hospitals are paying twice and three times what they would normally pay for temporary, traveling nurses, said Dr. Jeff Smith, the hospitalâ€™s chief operating officer.

Houston Methodist Hospital recently paid $8,000 retention bonuses to keep staff nurses from signing up with agencies that would send them to other hot spots. Pay for traveling nurses can reach $6,000 per week, an enticement that can benefit a nurse but can seem like poaching to the hospital executives who watch nurses leave.

â€œThereâ€™s a lot of these agencies that are out there charging absolutely ridiculous sums of money to get ICU nurses in,â€ Boom said. â€œThey go to California, which is in the midst of a surge, but they poach some ICU nurses there, send them to Texas, where they charge inordinate amounts to fill in gaps in Texas, many of which are created because nurses in Texas went to Florida or back to California.â€

Space is another problem. Augusta University Medical Center in Augusta, Georgia, is treating adult ICU patients, under age 30, in the childrenâ€™s hospital. Recovery rooms now have ICU patients, and, if things get worse, other areas â€” operating rooms and endoscopy centers â€” will be the next areas converted for critical care.

To prevent rural hospitals from sending more patients to Augusta, the hospital is using telemedicine to help manage those patients for as long as possible in their local hospitals.

â€œIt is a model I believe will not only survive the pandemic but will flourish post pandemic,â€ said Dr. Phillip Coule, the Augusta hospitalâ€™s chief medical officer.

Hospitals are pleading with their communities to wear masks and limit gatherings.

â€œThere just hasnâ€™t been a lot of respect for the illness, which is disappointing,â€ said Dr. William Smith, chief medical officer for Cullman Regional Medical Center in Cullman, Alabama. He sees that changing now with more people personally knowing someone who has died.

The Alabama hospitalâ€™s ICU has been overflowing for six weeks, with 16 virus patients on ventilators in a hospital that a year ago had only 10 of the breathing machines. â€œYou can see the stress in peopleâ€™s faces and in their body language. Itâ€™s just a lot for people to carry around,â€ Smith said.

â€œJust the fatigue of our staff can affect quality of care. Iâ€™ve been encouraged weâ€™ve been able to keep the quality of care high,â€ Smith said. â€œYou feel like you are in a very precarious situation where errors could occur, but thankfully weâ€™ve managed to stay on top of things.â€

Hospitals say they are upholding high standards for patient care, but experts say surges compromise many normal medical practices. Overwhelmed hospitals might be forced to mobilize makeshift ICUs and staff them with personnel without any experience in critical care. They might run out of sedatives, antibiotics, IVs or other supplies they rely on to keep patients calm and comfortable while on ventilators.

â€œItâ€™s really daunting and mentally taxing. Youâ€™re doing what you believe to be best practice,â€ said Kiersten Henry, a nurse at MedStar Montgomery Medical Center in Olney, Maryland, and a board director for the American Association of Critical-Care Nurses.

â€œWhat is stressing everybody out,â€ Mantor said, â€œis looking at week after week after week, the spigot is not being turned off, not knowing there is a break, not seeing the proverbial light at the end of the tunnel.â€