4 Days In January: Trump Push For Capitol Coda To 2020 Vote 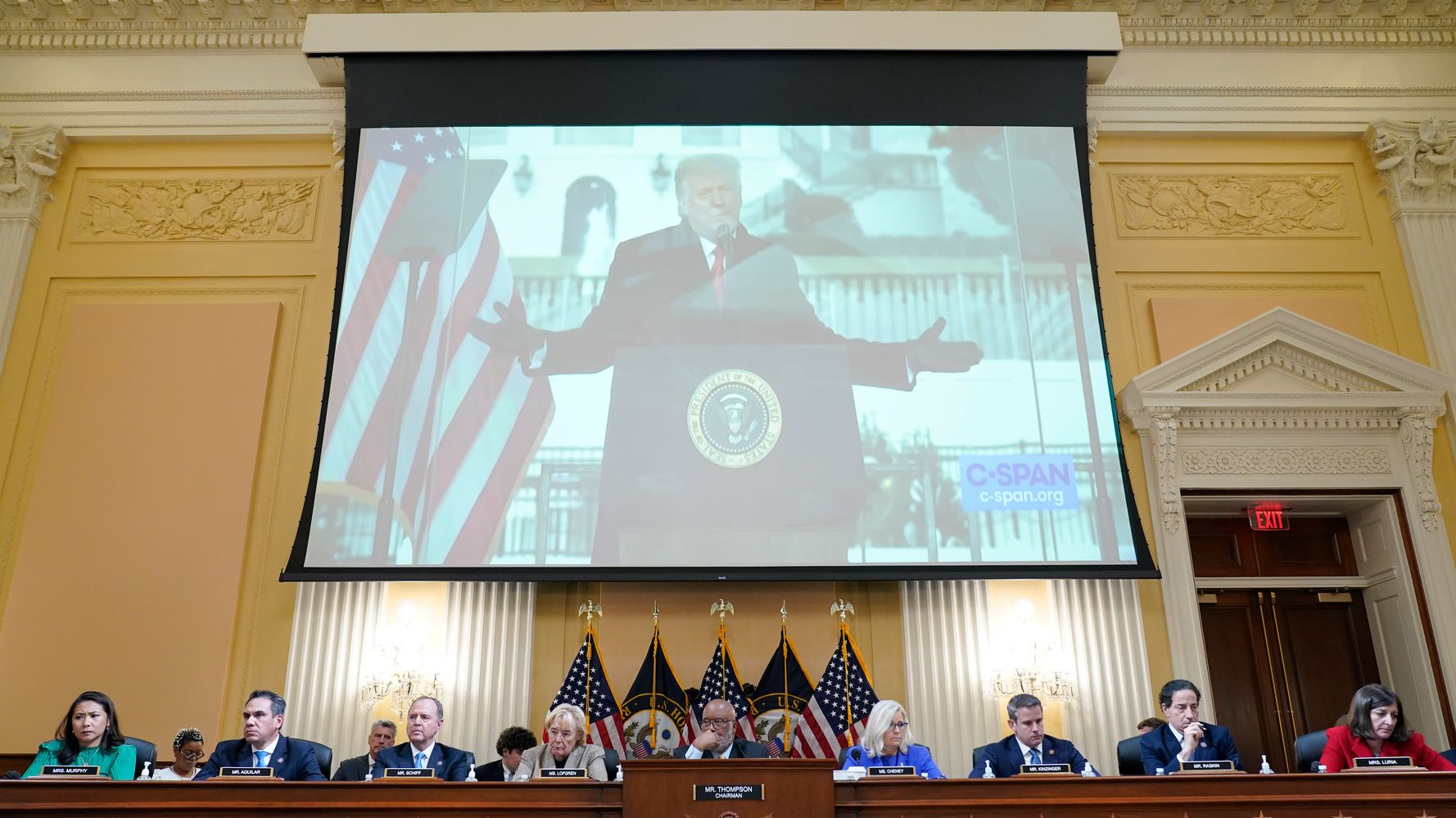 WASHINGTON (AP) — It would have been something never quite before seen in America — a defeated president, Donald Trump, standing at the Capitol on Jan. 6, 2021, with a mob of supporters, some armed, contesting the election outcome.

Trump intended to go there that day. His allies had been planning for the moment, envisioning the president delivering a speech outside the building or even entering the House chamber amid objections to Congress certifying the 2020 election results for Democrat Joe Biden.

But White House lawyers thought it was a “terrible” idea. Counsel Pat Cipollone warned that Trump could be charged with “every crime imaginable” if he joined mob on Capitol Hill trying to interfere with the certification.

In the end, Trump never made it to the Capitol on Jan. 6. His security refused to take him as rioters, some with weapons, laid siege to the building.

Furious, and stuck at the White House, Trump watched the insurrection on television.

The Jan. 6 hearings are providing dramatic new insight about Trump’s intentions as he told loyalists he would join them on a march down Pennsylvania Avenue to “fight like hell” for his presidency. This account is drawn largely from the testimony of former White House aide Cassidy Hutchinson. Her recollections from her close proximity to the president and his inner circle suggest Trump’s demands were not the brash desires of an impulsive commander in chief but part of his last-ditch plan for stopping Biden’s victory.

Trump and his allies quickly disputed Hutchinson’s account, and the former president conducted his own interview days later disparaging her with derisive commentary and nicknames.

This coming week, the committee is set to focus on Trump’s own actions and those of the extremist Oath Keepers and Proud Boys in allegedly leading the Capitol attack.

A look at what’s known about Trump’s plans to join the mob on Jan. 6:

It was a Saturday night. Giuliani had been meeting at the White House with Trump’s chief of staff, Mark Meadows, and others.

The White House and Meadows had placed some 18 calls that day to Brad Raffensperger, Georgia’s secretary of state, before Trump finally got the elections official on the phone.

Trump had been disputing the election results in Georgia, which he narrowly lost. He was demanding that Raffensperger “find 11,780 votes,” exactly enough to tip the balance from Biden’s victory. The engineer-turned-civil servant declined.

As Giuliani left the White House that night, he walked out with Meadows’ young aide, Hutchinson, a senior adviser.

“Cass, are you excited for the 6th?” Giuliani asked, as Hutchinson recalled in testimony before the Jan. 6 committee. “It’s going to be a great day.”

Hutchinson had heard discussions about Jan. 6 and the rally being planned outside the White House as Congress was set to certify the election results. She also had heard, when Giuliani was around, mentions of the Oath Keepers and Proud Boys, two extremist groups.

She looked at Giuliani and asked him to explain.

On Sunday, Cipollone privately raised concerns to Hutchinson about the president’s planned trip to the Capitol.

Cipollone told her there were “serious legal concerns” if Trump went ahead as Congress was certifying the election. He urged her to relay the concerns to her boss, Meadows.

“We need to make sure that this doesn’t happen,” Cipollone said, according to Hutchinson’s testimony. “This would be a legally a terrible idea for us. We’re — we have serious legal concerns if we go up to the Capitol that day.”

That Sunday was a busy day at the White House.

The leaders of Trump’s Justice Department were threatening to resign if the president replaced the acting attorney general, Jeffrey Rosen, with a lower-ranked civil division head, Jeffrey Clark, to pursue the electoral challenge.

And that same day, the U.S. Capitol Police issued a special event assessment, noting that the Proud Boys and other groups planned to be in Washington on Jan. 6.

The police assessment indicated that “unlike previous post-election protests, the targets of the pro-Trump supporters are not necessarily the counter-protesters… but rather Congress itself is the target on the 6th.”

On Tuesday, the eve of Jan. 6, according to Hutchinson, Trump asked Meadows to be in touch with two of the president’s associates — Roger Stone and Michael Flynn.

Stone attended rallies for Trump in Washington and was photographed with multiple members of the Oath Keepers who were allegedly serving as his security detail, according to the committee. Both Stone and Flynn invoked their Fifth Amendment rights rather than testify before the committee.

The big “Stop the Steal” rally was planned for the morning of Jan. 6 near the White House. Meadows spoke with both Stone and Flynn that evening, Hutchinson said. Stone has disputed her account.

Meadows also sought to join Giuliani and others who had set up a “war room” at the Willard Hotel close to the White House, she testified.

“I had made it clear to Mr. Meadows that I didn’t believe it was a smart idea for him to go to the Willard Hotel that night,” she said.

The morning of the rally on Wednesday, Jan. 6, Cipollone pleaded once again with Hutchinson to ensure Trump did not head to the Capitol.

“Please,” he said, “make sure we don’t go up to the Capitol, Cassidy,” she recalled. “We’re going to get charged with every crime imaginable if we make that movement happen.”

Hutchinson’s desk at the White House was just down the hall from the Oval Office, which was in one corner, and her boss Meadows’ office in the other. But that day she was with the president backstage as he surveyed the crowd of supporters outside the White House.

The crowd was not as full as Trump wanted it. Supporters lingered outside the security screening, unwilling to have their weapons confiscated by the Secret Service to join the main rally area.

Trump ordered his security to get rid of the metal detectors, known as magnetometers, insisting the armed supporters were no threat to him.

The police radios crackled with information; a man in the trees with a rifle or another with a handgun at his waist; three men with an AR-15 walking at 14th Street and Independence Avenue.

Trump has disputed Hutchinson’s account. “I didn’t want guns,” he said in an interview with Newsmax that aired two days after the hearing.

But Hutchinson had recounted to the committee what she heard.

The president took the stage at the “Stop the Steal” rally complaining about the election outcome and the need to stop Biden from becoming president.

“We’re going to walk down, and I’ll be there with you,” Trump said to the thousand of supporters at the grassy Ellipse.

“We’re going to walk down to the Capitol,” Trump said. “You’ll never take back our country with weakness; you have to show strength.”

Many people had already started peeling off toward the Capitol, and Trump encouraged the crowd to go.

“I know that everyone here will soon be marching over to the Capitol building to peacefully and patriotically make your voices heard,” he said. “Let’s walk down Pennsylvania Avenue.”

A White House security log, revealed by the Jan. 6 committee, shows the scramble that was underway for Trump to go to the Capitol as well.

“MilAide has confirmed that he wants to walk,” said one entry on the National Security Council chat.

“They are begging him to reconsider,” reads another.

The next entry was a discussion of the “current route” for Trump’s motorcade to take 15th Street, to F Street, to 6th Street, to Pennsylvania Avenue to the Capitol.

“So this is happening,” reads another entry.

Hutchinson was still in the tent behind the rally stage when she got a phone call from House Republican leader Kevin McCarthy of California.

McCarthy sounded rushed, frustrated and angry, she said. “You told me this whole week you aren’t coming up here. Why would you lie to me?” he asked Hutchinson, a former House aide.

“I’m not lying. I wasn’t lying to you, sir,” she replied. And McCarthy said, “Well, he just said it on stage, Cassidy. Figure it out. Don’t come up here.”

The mob was breaking past the security fencing around the Capitol.

“Capitol Police are reporting multiple breaches,” the security log reads. “Capitol is now calling for all available to respond.”

Trump climbed into the presidential SUV determined to be taken to the Capitol, Hutchinson recalled.

The Secret Service now disputes her account, as does Trump. But Hutchinson testified under oath that she was told later by Anthony Ornato, the deputy chief of staff for White House operations, that Trump was irate.

“The president said something to the effect of, ‘I’m the effing president, take me up to the Capitol now,’” she recalled.

When the driver, Bobby Engel, responded, “Sir, we have to go back to the West Wing” Trump grabbed at the steering wheel, and lunged at the driver’s “clavicles,” she said.

Trump never made it to the Capitol. His motorcade headed back to the White House.

In the Newsmax interview, Trump dismissed the idea that he tried to “commandeer” the car to go to the Capitol as “totally false.” He marveled at the “incredible size” of the crowd — one of the biggest, he said, he has ever attracted. But he did not dispute wanting to go to the Capitol that day.

“I wanted to go so badly,” he said during an April interview with the Washington Post.

At the hearing, the security log made clear just how close Trump came to creating that unseen image — a defeated president standing with the mob as an armed insurrection was laying siege to the Capitol.