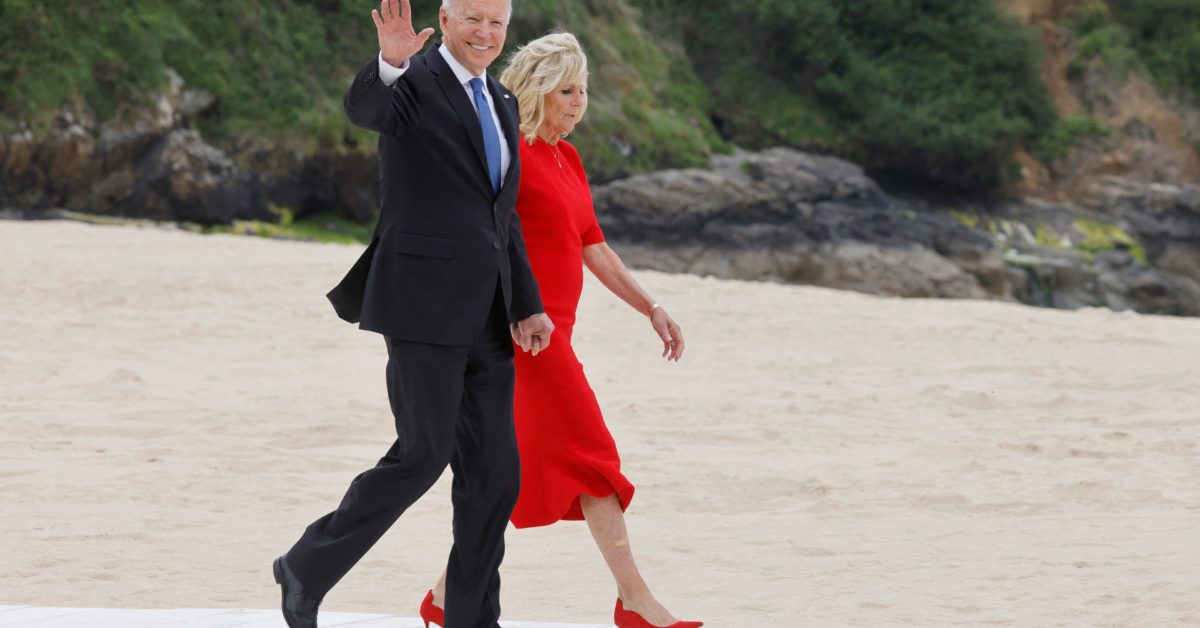 BERLIN â€” Few American presidents come into office with as much international travel under their belts as Joe Biden.

During his tenure as vice president alone, Biden logged more than 1 million miles on trips to 57 countries. Adding the hundreds of trips he made as U.S. senator on the foreign relations committee beginning in the 1970s, one could make a good case that Biden has the largest carbon footprint of anyone whoâ€™s ever lived in the White House.Â

Many of those trips were to Europe, which has always had a special place in Bidenâ€™s heart. Thatâ€™s why itâ€™s no accident that he made his first foreign trip to the Continent.Â The official purpose of Bidenâ€™s trip might be to show European allies some love after the beating they suffered under his predecessor â€” but Biden also just really likes Europe.Â

That enthusiasm has been palpable over the years, whether he was visiting his ancestral home in Ireland, the Munich Security Conference or the farthest reaches of the Balkans, all places that he has returned to time and again.

â€œItâ€™s been the joy of my life,â€ Biden said a few years ago about his travels, expressing boyish awe at â€œhow similar we are.â€Â Â

Here are five places that helped turn Biden into a closet European.Â

A lot of American politicians have Irish heritage, but few seem to reallyÂ getÂ the place like Biden, both of whose parents were of Irish stock.

That might be because his ancestors passed down tales of the plight of fleeing Irelandâ€™s 19th-century famine. Or, it could be that, unlike John F. Kennedy, another Irish Catholic president, Biden grew up in a working-class family that struggled to make ends meet. He attributes his parentsâ€™ lessons about resilience and â€œnever bendingâ€ to their Irish roots. During a presidential debate with Donald Trump last year, Biden, who accused his opponent of being a racist, said people like himÂ â€œlook down their nose on people like Irish Catholics and like me and people who donâ€™t have money.â€

Just how personal Bidenâ€™s Irish connection is to him became clear during a visit he took with his family to County Mayo in western Ireland in 2016. It was from there in the mid-1800s that one of his great grandfathers set out for America. Thousands of locals lined the streets to catch a glimpse of the then-vice president, who spent much of his time there meeting extended relatives.

â€œIt sounds bizarre, but we sat down and it was like weâ€™d known each other forever,â€ he said.Â Â

The other corner of Europe where the professional and political have melded for Biden is the former Yugoslavia, a region rife with historical divisions not dissimilar to those of Ireland.Â

He reflected on those parallels in a 1999 speech following the NATO air campaign against Yugoslavia, which forced Belgrade to withdraw from Kosovo.Â

â€œBosnia and Kosovo have been freed from Belgrade, but, as was the case in â€¦ Ireland, the people are often using their freedom to kill each other,â€ he lamented.

In the early 1990s, he was a staunch advocate for U.S. engagement in the region to prevent the killing of innocents in Bosnia and Kosovo. In a prescient 1993 New York Times op-ed, he warned that a U.N. arms embargo forbidding weapons sales to Bosnia was effectively â€œcodifying Serb aggressionâ€ and leading the people there to slaughter.

â€œThe West has dithered so pathetically, and Bosnia has suffered so terribly, that Bosnian leaders are justifiably suspicious,â€ he began.

The embargo was never lifted, mainly due to European resistance, but as the Srebrenica genocide and other horrors of the war would later illustrate, Biden and other critics were right.Â

Biden never gave up on the Balkans, returning time and again, long after most western politicians had lost interest. â€œThe Balkans are not a strategic sideshow,â€ he told his Senate colleagues after he visited the region in 2001.Â â€œSoutheastern Europe remains central to security for the entire continent and, hence, for the United States.â€

After becoming vice president in 2009, Biden visited the region again, in part because he worried that Washington had all but forgotten about it after 9/11.Â

In 2016, Biden visited Kosovo for the opening of a new highway named after his late son, Beau, a lawyer who had worked to help establish a new justice system in the country in the early 2000s.Â

â€œBeau loved this country like I do,â€ BidenÂ said of his son, who died of brain cancer in 2015.Â

As a convinced transatlanticist, Biden is nowhere more at home than in the wheelhouse of the western alliance â€” NATO headquarters. Heâ€™s due to visit there again for the NATO summit on Monday. Unlike his predecessor, who complained about the cost of NATOâ€™s new modern complex and declared the alliance â€œobsolete,â€ Biden will celebrate the partnership as one of the greatest achievements of modern history.Â

Biden has been a fixture at NATO ever since he entered public service. He was co-chairman of the NATO Observer Group in the Senate, set up in 1997 to prepare for the allianceâ€™s expansion, which he championed. When the Senate approved NATO enlargement in 1998, Biden called it â€œthe beginning of another 50 years of peace.â€

For Biden, NATO is more than just an alliance; it represents the power of American ideals and what many of his generation still regard as the U.S.â€™s historic mission to spread freedom and democracy across the world. Inviting former Warsaw Pact countries into the club wasnâ€™t just about ensuring their future security, he said back in 1998:Â â€œWeâ€™ll be righting an historical injustice forced upon the Poles, Czechs and Hungarians by Joseph Stalin.â€

Bidenâ€™s connection to the Bavarian capital has less to do with its famous beer halls than with the annual security conference there, which some lovingly call â€œDavos with guns.â€Â

Biden became a regular at the annual meeting during the Cold War when it was still known by its German name: Wehrkunde. Though unpronounceable to most American officials, Wehrkunde became a fixture on the calendar of Americaâ€™s foreign policy and security establishment stretching back to the 1960s.Â

During the Cold War, Biden would join other leading lights of the western alliance in the basementÂ StubeÂ of the five-star hotel that hosts the meeting to talk shop over beers and plot against the Soviets. The personal relationships built in Munich over the years helped create the glue that kept the West together through the challenges of that period and beyond.

Biden never stopped coming. In a speech at the meeting in 2019, now known as the Munich Security Conference, Biden upstaged then-Vice President Mike Pence, who was also there, exclaiming, â€œI promise you â€¦ Weâ€™ll be back.â€ Bidenâ€™s message to Europe: Trump wonâ€™t be around much longer. Earlier this year, he returned to Munich â€” at least virtually â€” to deliver his now-famous call to arms: â€œAmerica is back.â€

Bidenâ€™s decision to spend his honeymoon on Hungaryâ€™s famous Lake Balaton wouldnâ€™t be that notable if it werenâ€™t for the year he did so: 1977.Â

Though the Cold War was thawing a bit that year, Hungary wouldnâ€™t have topped many newlywedsâ€™ dream honeymoon destinations. That didnâ€™t dissuade Biden, then still in his first term as a senator, from taking his bride behind the Iron Curtain. It was Bidenâ€™s first trip to the region, and in addition to taking in the beauty of Balaton, he also spent time in Budapest, meeting with communist officials, journalists and dissidents. The trip, which was organized by Tom Lantos, a Hungarian-born Holocaust survivor who worked as an adviser to Biden before becoming a U.S. congressman, left a strong impression on the future president.

â€œUntil that, I had no idea that the only place in the world where it is worth [it] to eat fish is Balaton,â€ he said years later. The trip also shaped his view of what was really at stake in the Cold War. Biden won a place in Hungaryâ€™s heart that year by promising that the U.S. would return the Hungarian crown, which the country had discovered in Austria in 1945.Â

Those good memories notwithstanding, Biden is unlikely to return to Hungary anytime soon. He has made no secret of his displeasure over the countryâ€™s authoritarian turn under Prime Minister Viktor OrbÃ¡n in recent years. In 2020, he mentioned the country in the same breath as autocrat-run Belarus, lamenting the â€œrise of totalitarian regimes around the world.â€Â