A Bunch Of Republicans Are (Quietly) Running Against Donald Trump 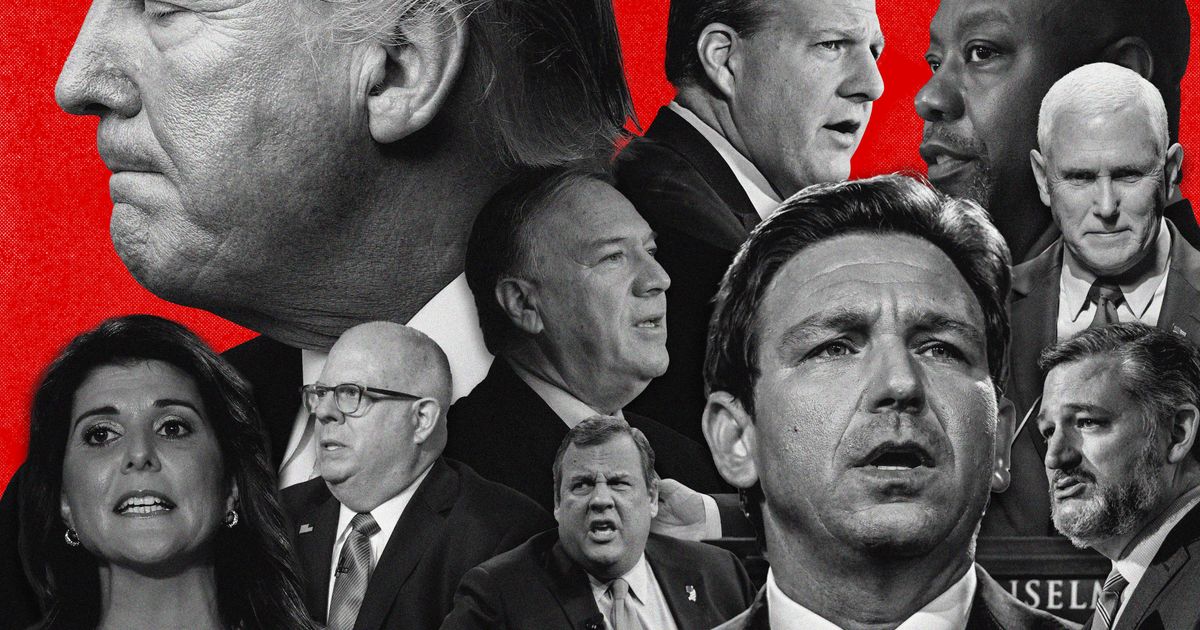 The midterm elections are barely behind us, but Republicans are already looking ahead two years: To the next presidential election when they’ll have the opportunity to retake the White House from Joe Biden.

So far, only Donald Trump has made his candidacy official, while nearly a dozen other Republicans are expected to announce their plans in the coming weeks and months. Primary season kicked off in earnest last weekend at the Republican Jewish Coalition leadership convention, a showcase for those who are weighing still-unconfirmed challenges to Trump for the GOP nomination.

Far from clearing the field, a slew of Republicans who once embraced the former president are now sharpening their pitches against him, something that seemed unthinkable as recently as a few weeks ago, before Trump-backed candidates were fully shellacked in the midterms. The better-then-expected result for Democrats was seen as a rejection of the hard-line MAGA movement and an opening for a new GOP standard-bearer.

But having too many candidates in the mix might backfire on Republicans by simulating a repeat of the 2016 primary when a large GOP field splintered the vote and handed Trump the nomination.

As the presidential election draws nearer (a mere 713 days away!), here are the Republicans most likely to bring the Republican “shadow primary” out into the open:

There’s no uncertainty here since Trump made his third White House run official last week. Substitute Trump Tower’s golden escalator for a banquet hall at his Florida estate, and it was practically 2015 all over again: the same rhetoric, minus some of the energy. For a leader who cost the party control of the White House and Senate, polls indicate that Trump remains stubbornly well-liked among Republicans.

The 45th president didn’t present a fresh vision for what he might accomplish in a non-consecutive second term beyond calling for drug dealers to receive the death penalty. “Our country is a laughingstock right now,” said Trump, who faced two impeachments and used conspiracies to justify his election loss. “The blood-soaked streets of our once great cities are cesspools of violent crime.”

Instead of scaring off potential opponents, Trump’s announcement gives them space to define themselves against his less popular qualities and midterm election losses. Being first out of the gate also gives Trump’s candidacy more time to fizzle out over the course of a very long campaign season.

Florida Gov. Ron DeSantis has not yet announced his widely anticipated presidential bid yet. But he strongly hinted at his plans to eager masses of donors, party elites and reporters at the first major 2024 cattle call for the GOP, the Republican Jewish Coalition (RJC) gathering in Las Vegas. “We’ve got a lot more to do, and I have only begun to fight,” DeSantis said during his keynote address.

DeSantis, who won reelection by nearly 20 percentage points, has everything he needs to rival Trump: a deep network of donors, allies in the right-leaning media, and a sterling reputation as a conservative culture warrior. He’s basically Trump minus the baggage.

To some, DeSantis, the most popular Trump alternative, is also Trump minus the charisma — the quality that endeared Trump to his supporters despite all the hair-raising tweets and attempts at overthrowing a free and fair election.

More than his words in recent months, the former vice president’s actions speak volumes about his presidential ambitions and how he might position himself against his one-time ally. Besides visiting important primary states and releasing a strategically timed memoir, Pence sparked a midterm proxy war against Trump with his GOP primary endorsements, backing the candidates who were traditional counterweights to Trump’s far-right MAGA slate.

Pence has hinted at a 2024 bid while promoting his new book, “So Help Me God,” in which he describes his falling out with Trump over the election while also embracing the administration’s record in the four years preceding Jan. 6, 2021, when a violent mob that threatened to hang Pence stormed the Capitol.

“I think the American people are looking for leadership that can unite our country, around our most timeless values and ideals, and demonstrate the kind of civility and respect that Americans show one another every day,” Pence said during a recent CNN town hall.

The central flaw in Pence’s argument: uniting around the principles of “civility and respect” might be a non-starter for a Trump base that sees Pence as a traitor simply because he certified the 2020 election for Biden.

Former U.N. Ambassador Nikki Haley and former Secretary of State Mike Pompeo are other veterans of the Trump administration long rumored to have White House aspirations.

Haley confirmed at the RJC event that she’s “seriously considering” running and suggested an announcement may be imminent. “A lot of people have asked if I’m going to run for president. Now that the midterms are over, I’ll look at it in a serious way, and I’ll have more to say soon,” said Haley, who previously said she wouldn’t seek to run against Trump.

At the same event, Pompeo, a long-serving Trump cabinet member, made headlines for a veiled swipe at Trump: “We were told we’d get tired of winning. But I’m tired of losing.”

Pompeo seems to also be taking a page from Virginia Gov. Glenn Youngkin, another rumored 2024 candidate, and tapping into anger over parental rights. He recently cited Randi Weingarten, president of the nation’s second-largest teachers’ union, as the “most dangerous person in the world.”

Tim Scott: Said He Was Running In His Book (Oops!)

South Carolina Republican Sen. Tim Scott inadvertently spilled his plans to seek higher office in his memoir, “America: A Redemption Story.” Scott said it was a publishing error and denied that he was, in fact, “preparing for [a] presidential bid.” But Scott’s memoir, timed with trips to Iowa where he has offered a bipartisan vision for the nation as its only Black Republican senator, hint that he’s giving it real thought.

If there’s a lane for anti-Trump Republicans in 2024, it might be occupied by someone like Rep. Liz Cheney, the Wyoming Republican who lost her primary for voting to charge Trump in one of his two historic impeachments. Cheney has since vowed to do “whatever it takes” to stop Trump from getting near the White House again. She even crossed party lines to endorse midterm candidates running against Trump-backed election deniers.

Term-limited Maryland Gov. Larry Hogan is another Trump-allergic Republican expanding his national profile. Hogan recently blamed Trump for blowing the midterms, especially in places like his home state of Maryland, where Republicans lost the governor’s mansion in a rout after nominating a “QAnon whack-job.”

New Hampshire’s Chris Sununu is one of the few Republicans who can get away with calling Trump “fucking crazy,” and for that, Sununu — a popular three-term governor who passed on a Senate bid this year — also has presidential buzz. Sununu has sent mixed signals about his ambitions, though, saying he’s “not ruling anything out” while remaining committed to his home state.

The parallels between 2016 and 2024 don’t begin and end with Trump. Several Republicans who ran six years ago (like Pence) might return to the primary stage. Look no further than Texas Sen. Ted Cruz, who campaigned alongside many (losing) Republicans in the midterms, and former New Jersey Gov. Chris Christie. Cruz won the Iowa caucuses in 2016, beating Trump before the eventual GOP nominee smashed him in Super Tuesday contests. Christie was less successful, bombing in Iowa and New Hampshire.

Christie had one of the bluntest assessments of Trump among the Republicans campaigning at the RJC event: “In my view, he’s now a loser. He’s an electoral loser,” Christie said. “You look at a general electorate, I don’t think there’s a Democrat he can beat because he’s now toxic to suburban voters on a personal level, and he’s earned it.”