A call for vigilance as Sloveniaâ€™s EU presidency begins 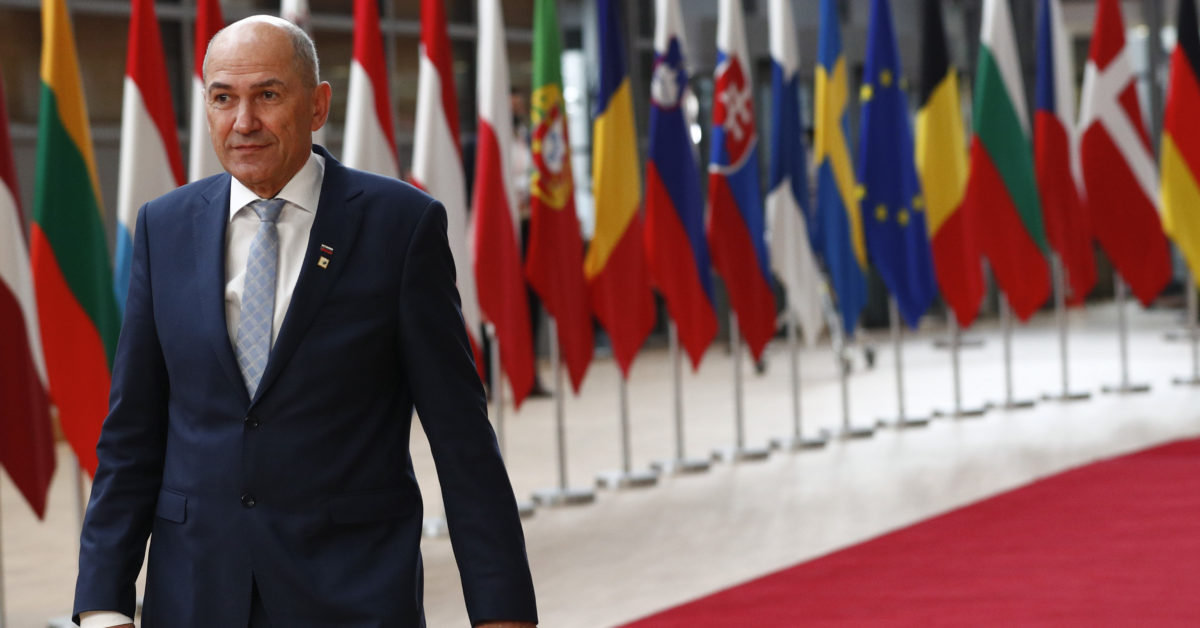 Noah Buyon is a research analyst at Freedom House.

Today, Slovenia assumes the rotating presidency of the Council of the European Union, and for the next six months, Prime Minister Janez JanÅ¡aâ€™s government will set the tone for EU policymaking.

He will need to be watched carefully. As the author of the most dramatic episode of democratic backsliding in independent Sloveniaâ€™s history, JanÅ¡a is taking his country down the same path as its Hungarian neighbor, where Prime Minister Viktor OrbÃ¡n has turned his back on democracy and European values.

Only a decade ago, just before Hungary assumed the Councilâ€™s presidency, international news media tracking OrbÃ¡nâ€™s early antidemocratic moves sounded â€œwarnings over press freedomâ€ in the country. Journalists also noted the Hungarian government had installed, as part of its â€œshowcaseâ€ in the Council building, a rug featuring a map of the countryâ€™s pre-World-War-I borders, a prominent nationalist symbol.

OrbÃ¡n chose the period of Hungaryâ€™s presidency to adopt a new and â€œimprovedâ€ constitution for Hungary, calculating that EU officials would be reluctant to criticize him while he held the tiller. While certain members of the European Parliament did speak up, OrbÃ¡nâ€™s calculation was largely correct, and in the 10 years since, he has damaged Hungarian democracy beyond recognition. Freedom House now classifies Hungary as a â€œhybrid regimeâ€ â€” the only one in the EU.

Now, on the eve of Sloveniaâ€™s presidency, history seems to be repeating itself. JanÅ¡a stands accused of undermining every pillar of his countryâ€™s democracy, especially the media â€” or, in his parlance, â€œpresstitutes.â€ In a disquieting sign of what the coming months may bring, his government scrapped a national showcase in Brussels, reportedly because a work by a well-known Slovenian artist-turned-critic was to be displayed, before eventually backtracking.

Since coming to power for the third time in early 2020, JanÅ¡a has used the COVID-19 pandemic to push unrelated priorities, like restricting the rights of environmental organizations, and has attempted to ram through others, like giving policing power to the military. He has tried to outlaw Levica, Sloveniaâ€™s third-largest opposition party; moved to evict NGOs from state-owned properties; refused to fund the Slovenian Press Agency, the independent state wire service; interfered with the work of the state prosecutorâ€™s office, as well as the European Public Prosecutorâ€™s Office; been indicted on corruption charges; and created a climate of hostility â€” particularly toward female detractors â€” through his venomous Twitter account. This is not an exhaustive list.

JanÅ¡aâ€™s endeavors have met stiff domestic resistance. He has faced two impeachment votes just this year, and survived both.

But while Slovenia, which Freedom House rates a â€œconsolidated democracy,â€ still has a long way to fall before becoming Hungary, Budapest is intent on helping its man in Ljubljana. OrbÃ¡n-aligned oligarchs have purchased several Slovenian media properties, including the countryâ€™s second largest commercial TV station, Planet TV. More recently, the sale of the prominent Siol.net news portal was abruptly halted after a prospective Hungarian buyer was outbid. And progovernment outlets on both sides of the border continue to trade talking points about the depredations of George Soros, fraud in the 2020 U.S. presidential election (which JanÅ¡a believes former U.S. President Donald Trump won) and other far-right fantasies.

The Hungarian model, which European leaders have long been unable or unwilling to challenge, is spreading. If it is allowed to take hold in Slovenia â€” and for the coming six months, in Brussels â€” the EU will be blessing antidemocratic practices like grand corruption and state-sanctioned intolerance.

This is, first and foremost, a matter of principle. The EU purports to be a values-based bloc, and JanÅ¡a is running roughshod over these values. But the spread of the Hungarian model presents practical difficulties. Already, OrbÃ¡n, in his capacity as Hungarian prime minister, has hampered the EUâ€™s ability to adopt principled foreign policy positions (e.g., on human rights in China) and deliver good governance (by joining with the Polish government to oppose rule of law conditionality for EU funds). Despite the limited bureaucratic powers of the Council of the EU, JanÅ¡a could exacerbate these problems in the next six months.

For one thing, JanÅ¡a is making rule of law a priority of Sloveniaâ€™s presidency. The trouble is, he understands it as a political cudgel rather than a principle of democratic governance. Thus, the seemingly innocuous declaration in Sloveniaâ€™s presidential program that â€œthe EU should treat all member states â€¦ equallyâ€ should be read in light of JanÅ¡aâ€™s earlier assertion that â€œ[some] political groups â€¦ are openly threatening to use the instrument wrongly called â€˜rule of lawâ€™ in order to discipline individual EU member states.â€

In addition to heading off such initiatives, other European leaders should put JanÅ¡a and his ministers in the hot seat at every meeting they chair in the half-year ahead. Encouragingly, the European Commission has thrown its support behind the embattled Slovenian Press Agency, while European Public Prosecutor Laura KÃ¶vesi has rebuked JanÅ¡aâ€™s government for its â€œmanifest lack of sincere cooperation.â€

Unfortunately, however, not all European actors are speaking up. Notably, the European Peopleâ€™s Party (EPP), to which JanÅ¡aâ€™s Slovenian Democratic Party belongs, has been mute. After finally forcing OrbÃ¡nâ€™s Fidesz party out of its ranks earlier this year, the EPP should not be carrying water for would-be potentates. The Hungarian model taking root in Slovenia is not compatible with the â€œEuropean modelâ€ the group touts in its platform.

European leaders must not accord JanÅ¡a the same leniency theyâ€™ve given his Hungarian counterpart. OrbÃ¡nâ€™s model of â€œilliberalâ€ democracy cannot be allowed to spread.