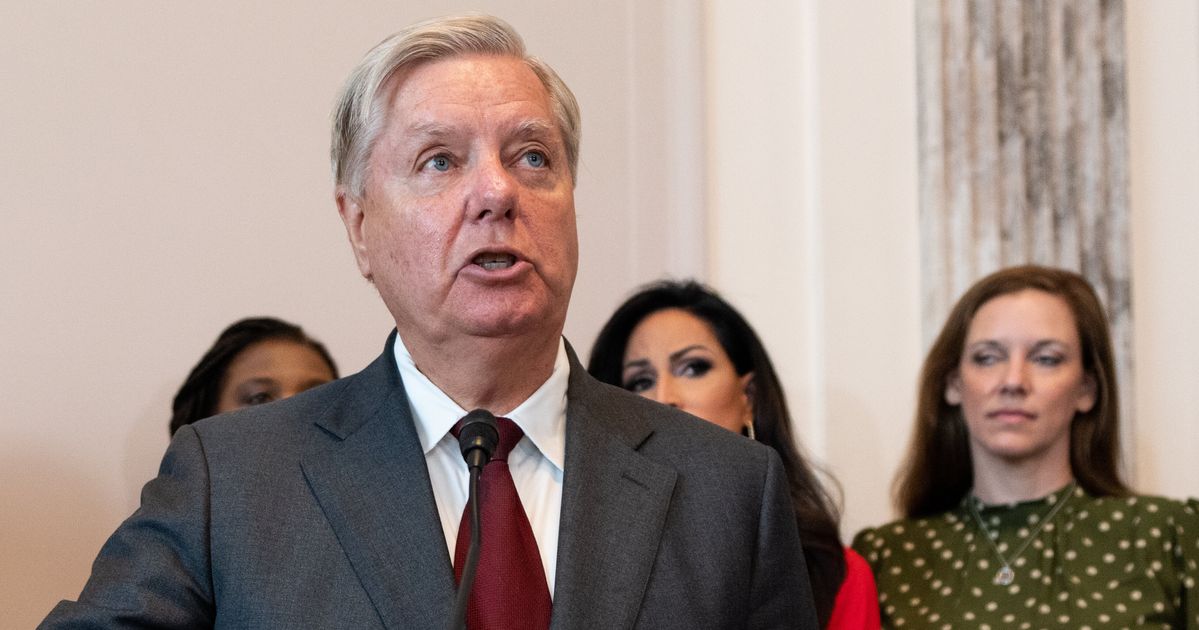 The bill would establish a nationwide ban on abortion after 15 weeks of pregnancy, with a limited set of exceptions for rape, incest and danger to the life of the mother. The ban would supersede existing state laws that allow more access to abortion, but ― critically ― not those that allow less.

To put it another way: California wouldn’t get to set its own abortion policy, but Texas would. As HuffPost’s Igor Bobic has noted, this is not what Graham suggested should happen after the Supreme Court’s ruling in Dobbs v. Jackson Women’s Health Organization.

“I’ve been consistent,” Graham told CNN in August. “I think states should decide … the issue of abortion.”

Graham presented the bill as a blueprint that Republicans could use for legislation if they get control of Congress in the midterms. And perhaps he thought he’d get his colleagues to rally behind it, given that his last attempt at abortion legislation, a 20-week ban he proposed in early 2021, had support from nearly the entire caucus.

But Graham got a very different response this time.

“Most of the members in my conference prefer this be dealt with at the state level,” Senate Minority Leader Mitch McConnell (Ky.) said at his weekly press conference.

Republican leaders in the Senate haven’t seemed this eager to distance themselves from a colleague since the spring, when Sen. Rick Scott (Fla.) unveiled a governing agenda that included cuts to Medicare and Social Security. The logic now is almost certainly the same as it was then: GOP leaders think Graham’s bill is a distraction at best, political poison at worst.

And they are probably right. The signs of a major Dobbs backlash are everywhere, from fundraising numbers to polls to the results of special elections. Republicans would much rather be talking about the economy ― especially this week, when a new monthly report on prices documented persistent inflation.

But there are plenty of reasons to take Graham’s bill seriously, as an indicator of what Republicans would like to do ― and a sign of what they might do if they get enough political power.

Here are a few of those reasons:

Graham describes his bill as a ban on “late-term” abortion. That term doesn’t come from science. It comes from abortion’s political opponents, who have typically used it to describe abortions at or (usually) beyond 20 weeks, as HuffPost’s Lydia O’Connor noted Wednesday.

Fifteen weeks of pregnancy, on the other hand, is just a few weeks into the second trimester ― well before tests can pick up many of the most serious fetal anomalies. And at 15 weeks, some women don’t even realize they’re pregnant, especially if they’re young or have poor access to medical care.

2. The limits in Graham’s bill are more extreme than his descriptions suggest.

Graham claims the bill would simply put American abortion laws on par with the laws in European countries, many of which have their own prohibitions. But this argument, a favorite of conservatives, is deeply misleading, for reasons that Adam Serwer laid out plainly in The Atlantic earlier this year.

The laws vary considerably from country to country. To the extent that restrictions exist, they typically have loosely written exceptions, including for the mental health of the mother, that make it possible to get abortions later in a pregnancy.

The exceptions in Graham’s bill, by contrast, include only rape, incest and danger to the life of the mother, and even those come with what looks like a big asterisk. Abortion rights advocates say the exceptions would be challenging to invoke because they come with strict deadlines and documentation requirements.

“When it comes to rape and incest exceptions, the substantial red tape that comes with reporting and proving an assault, along with the trauma and stigma associated with sexual violence, makes the exceptions largely unusable,” Elizabeth Nash, the principal policy associate for state issues at the Guttmacher Institute, told HuffPost.

3. Prohibiting abortion at all stages has long been a GOP goal ― and it still is.

McConnell and Cornyn had a lot to say about whether Graham’s bill is the caucus position and whether, ultimately, abortion rights should be an issue for the federal government or individual states. But neither disavowed Graham’s substantive position about when abortion should be legal.

And why would they? The party’s official position is that life begins at conception, that abortion is murder and that the law should treat it as such. It’s been that way for nearly 50 years and it was that way in 2016, which is the last time the GOP had an official platform. (Republicans didn’t formally approve a platform in 2020.)

Here’s what that 2016 platform said, just as a reminder: “We assert the sanctity of human life and affirm that the unborn child has a fundamental right to life which cannot be infringed. We support a human life amendment to the Constitution and legislation to make clear that the Fourteenth Amendment’s protections apply to children before birth.”

4. Abortion matters to a base that leaders can’t simply ignore.

Evangelicals are arguably the single most important voting bloc inside the Republican Party. They also exert outside influence because they vote in high numbers, with extra influence in Iowa and South Carolina ― two states that play early, critical roles in determining the GOP presidential nominee. And if the polling is correct, evangelicals overwhelmingly support near-total or total bans on abortion.

In theory, leaders like McConnell have the power to set the party’s legislative priorities ― and, in so doing, to keep a bill like Graham’s from getting a vote should the GOP get control of Congress. But if those leaders had (or were willing to use) that kind of power in order to keep abortion rights off the agenda, Graham would never have made his announcement in the first place.

And remember: It’s not as if a 15-week ban is the endgame for Republicans and conservatives who focus on abortion. They see it as a compromise on their eventual goal of prohibiting the procedure at all stages of pregnancy. They’ve spent decades fighting for the chance to get these laws on the books, and thanks to the Supreme Court, they finally can. It’s hard to imagine they’re going to back off now.