A Match Made by Persistent Friends 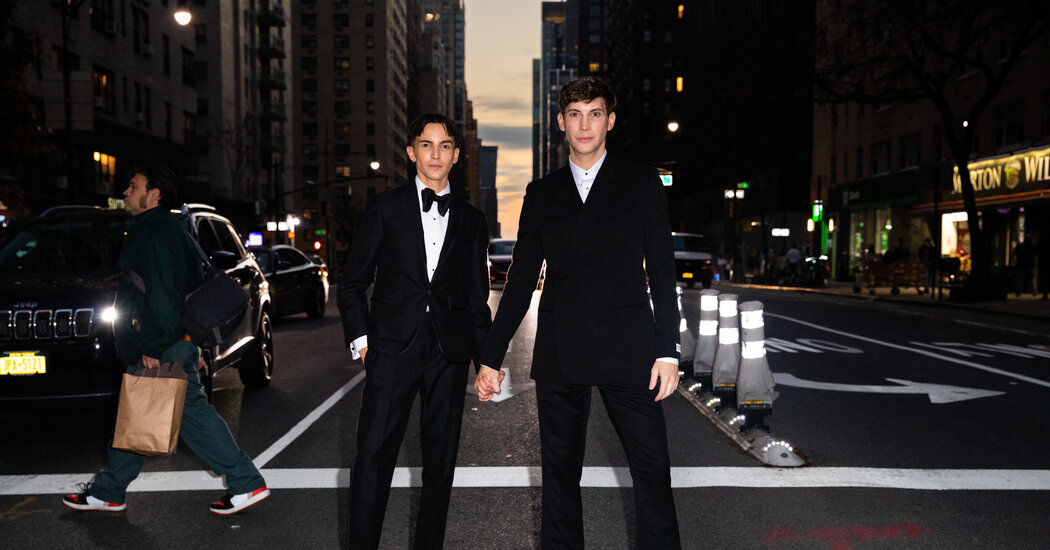 The way Cameron Girard Keady and Taylor John Toth eventually found each other and fell in love was about a decade in the making. And it probably wouldn’t have happened without the help of their college friends.

Mr. Keady, 33, met Alexandra Burns at Skidmore College, where he earned a bachelor’s degree in English literature in 2012. At the University of Delaware, Mr. Toth, 34, who graduated with a degree in fashion merchandising in 2011, met Samantha Stern. Ms. Burns and Ms. Stern were friends who grew up in Mequon, Wis.

In the summer of 2012, Mr. Toth met Ms. Burns in Mequon, while he was visiting Ms. Stern. With an eye toward matchmaking, Ms. Burns showed him photos of Mr. Keady. But Mr. Toth said he quickly dismissed them, thinking the two would likely never meet, “and that was the end of that.”

Except Ms. Burns wasn’t giving up. By early 2013, she and Mr. Keady had become roommates in Manhattan. At the same time, she remained in touch with Mr. Toth, who, as a professional pair figure skater, would often visit the city to see friends. She would alert Mr. Keady to any planned visits, hoping they would meet.

Then, on Aug. 17, 2013, Mr. Keady attended a concert at the Bowery Ballroom with a group of friends. In walked Mr. Toth, also with friends. Mr. Keady didn’t recognize him. Mr. Toth did recognize Mr. Keady from the photos he had seen of him, but couldn’t remember his name.

He immediately texted Ms. Burns. “I was like ‘What’s your gay roommate’s name?’” Mr. Toth said.

The evening progressed from there. The two ended up hanging out at the apartment Mr. Keady shared with Ms. Burns, though they never ran into her that night or the next morning.

That September, the pair had their first official date at the now-closed Lucky Strike restaurant in Manhattan’s SoHo neighborhood. By then Mr. Toth had retired from skating. (Three years earlier he won the junior title at the 2010 U.S. Championships.) He also moved to New York from Boston that November.

Just before Christmas, they were at a warehouse rave in Bushwick, Brooklyn. At 2 a.m., sitting on what once was the back seat of a van, Mr. Toth asked Mr. Keady to be “proper boyfriends.”

In February 2015, they moved in together in the West Village. A year and a half later, they adopted Mary, a rescue dog who required special care. “Very quickly, we had to come together,” Mr. Keady said. “It definitely made us more committed to her, to each other, to our relationship.”

Over the next four years, the couple changed apartments two more times, eventually landing in a new unit in Chelsea in May 2019. Through the moves, a proposal was on Mr. Toth’s mind.

The time finally came during Christmas that year. Mr. Toth, who is from Kittanning, Pa., and is now a business consultant for a variety of creative firms, had asked his mother to help him plan an elaborate proposal at the UPMC Rink at PPG Place, an ice-skating rink in downtown Pittsburgh.

But while walking through the parking lot of the since-closed Ace Hotel in Pittsburgh, Mr. Keady, who is from Longmeadow, Mass., and is the senior manager of corporate digital and editorial content at L’Oréal USA, mentioned that a friend had gotten married at that hotel. “I was like ‘OK, that’s my chance,’” said Mr. Toth, who proposed right there, in the parking lot.

The couple exchanged vows at the office of the city clerk in Manhattan Nov. 10, with Madeline Plasencia, a clerical associate supervisor, officiating. “It’s pretty powerful to go right to the source when other gay couples weren’t able to do that not so long ago,” Mr. Keady said. The couple wore white denim pants and jackets painted by the Brooklyn-based artist Kevin Emerson.

A black-tie reception for 89 guests took place Nov. 12 at Mr Chow, a favorite restaurant for the couple on Manhattan’s Upper East Side.

There were toasts from both men’s fathers and dinner, then tables were removed and a disco ball spun. “The whole night was iconic in every single way,” Mr. Keady said.

Ms. Burns, who was among the guests, along with Ms. Stern, was happy she had provided the icebreaker that helped get them to this moment. “It’s really nice to see real love show up,” she said.