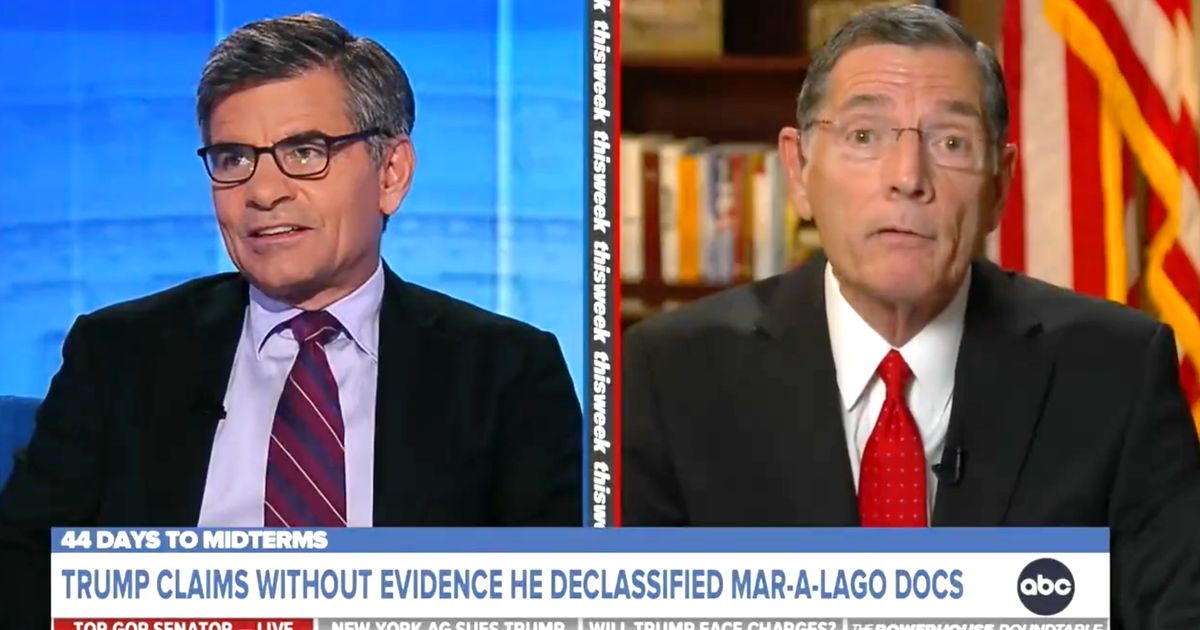 ABC host George Stephanopoulos was in disbelief Sunday after Sen. John Barrasso (R-Wyo.) danced around questions of whether U.S. presidents can declassify documents with their minds.

Stephanopoulos asked the senator on ABC’s “This Week” if he agreed with former President Donald Trump’s recent assertion that he could declassify government materials “even by thinking about it.”

Barrasso, who once refused to condemn Trump for defending protesters’ calls to “hang Mike Pence” during the U.S. Capitol riot, did not challenge the decidedly ridiculous statement.

“I’ve not heard that one before,” he said. “George, I tell you, in terms of national security documents, we have to always use extreme caution. I’m on the Foreign Relations Committee. We deal with classified information all of the time and are always very careful.”

He continued: “I don’t know anything about the rules for when a president declassifies documents and information.”

“I’ve not heard that one before … I don’t know anything about the rules for when a president declassifies documents” — George Stephanopoulos can barely believe it when John Barrasso refuses to say that Trump can’t declassify docs by merely thinking about it pic.twitter.com/WticattUtc

“What I do know is what I’d like to see from the Senate standpoint is I’d like to see the Department of Justice come to us and show us in a classified setting what the information is. What they’ve done,” he added.

Barrasso then questioned the FBI search of Trump’s Mar-a-Lago resort for classified documents. “We’ve never seen anything like that before,” he said. “So, I want to get a briefing so that we can then be informed to see what actually happened here.”

Trump’s legal team has used similar rhetoric in court, arguing the DOJ should not be taken at its word that classified documents were recovered during the search.

Stephanopoulos, stunned, responded: “That was a rhetorical question.”

“You know that a president can’t declassify documents by thinking about it. Why can’t you say so?”

Barrasso finally acknowledged: “I don’t think a president can declassify documents by saying so, by thinking about.”