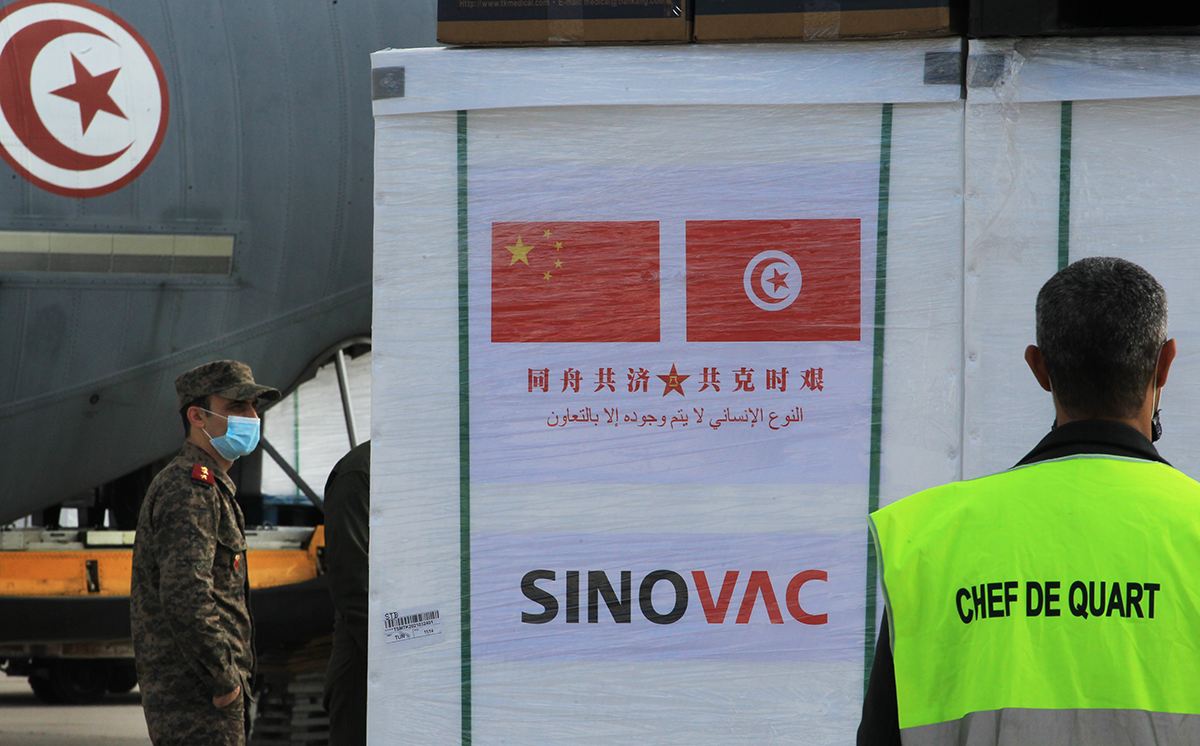 This piece is part of a four-part series published by the Middle East Institute in cooperation with Arab Barometer analyzing the results of the sixth wave of the Arab Barometer surveys.

In recent years, China and Russia have gradually increased their influence in the Maghreb. The two powers, relative newcomers to the regional scene compared to Europe and the U.S., have been building stronger commercial, security, and diplomatic ties to the Maghreb countries of Morocco, Algeria, and Tunisia. However, these ties have not yet translated into significant popular approval or support.

Russia, historically an Algerian ally, and China have used vaccine diplomacy during the pandemic to try to garner more positive public sentiment, particularly compared to the region’s traditional and U.S. allies. Yet, popular perception of these new actors remains relatively low, consistent with low favorability for all other external actors — including Europe and the U.S. For a diverse and dynamic region, the results consistently show little interest in the role external actors play. And while governments might be interested in expanding economic and security ties across the globe, the region’s populations are focused largely on domestic dynamics, which also suggest they see solutions to their problems as being largely internal.

Still, China and Russia have sought to use vaccine diplomacy to increase their reach and influence in Morocco, Algeria, and Tunisia. The Chinese Sinopharm and Russian Sputnik V vaccines have been crucial to aiding Algeria and Tunisia in ensuring more coverage for their populations. Both countries struggled to launch large-scale vaccination campaigns and most of the vaccines they were able to procure initially (which for both did not happen until well into 2021) were Sinopharm and Sputnik. In the summer of 2020, Chinese President Xi Jinping promised during a call with Morocco’s King Mohammed VI to prioritize providing vaccines to developing countries. Russia has also made ambitious promises of its own.

In the summer of 2021, through the global COVAX initiative, Algeria and Tunisia were able to secure other vaccines, including AstraZeneca and Pfizer-BioNTech. However, during the height of vaccine shortages, Algeria and Tunisia could mostly count on Russian and Chinese vaccines, respectively. Although Morocco was able to kickstart its vaccination campaign earlier relying on AstraZeneca vaccines through its stronger relationship with European producers, it still relied substantially on the Sinopharm vaccine as well.

Yet, despite these efforts, the new entrants to the Maghreb scene have not registered broad or overwhelming approval. According to an Arab Barometer survey conducted in October 2020, 60% of Algerians polled had a very or somewhat favorable opinion of China. Results from a follow-up survey conducted in March and April 2021 show that 65% of Algerians polled reported a very or somewhat favorable view — a fairly small increase given the Chinese role in vaccine provision. Although China’s ties with Algeria have been growing for years and have been reinforced by the Belt and Road Initiative, its relationship and involvement with African countries — including Algeria — remain fraught.

The change is also consistent among those polled in Morocco. Results from October 2020 showed that 55% of those polled viewed China very or somewhat favorably, and this percentage increased to 62% in the March and April 2021 poll. In Tunisia also, favorability toward China increased among those polled from 53% in November 2020 to 59% in March and April 2021. While the Moroccan and Tunisian governments have both sought to draw greater investment from China, they have faced obstacles. In Morocco, agreements to manufacture the Chinese vaccine encountered delays before taking off. As for Tunisia, China has provided the country with COVID vaccine doses, but both countries have a history of setbacks in other areas of cooperation, including infrastructure investments.

Russia, which is historically a closer ally of Algeria, especially in security and arms procurement, had a 52% favorability among Algerians polled in October 2020. In Tunisia and Morocco, the percentages were lower, at 43%. In Libya, where internal conflict has raged for years, and where Russia through the Wagner group is a party to the conflict, its favorability rating is lowest, at 25%.

Sentiments toward the United States, a country with a larger historical footprint in the Maghreb than either Russia or China, are significantly less favorable. In October 2020, 24% of Algerians polled had a favorable opinion of the U.S. In the Morocco and Tunisia sample, U.S. favorability stood at 28% and 21%. The follow-up poll conducted in March and April 2021 showed improvements in U.S. perception among Tunisians and Algerians, with 38% of Tunisians and 31% of Algerians viewing the U.S. as more favorable. This could reflect more positive attitudes following the election of President Joe Biden, compared to Donald Trump, whose favorability in the Maghreb countries was quite low. The change in attitude within the Morocco sample was much more substantial. There attitudes toward the U.S. improved dramatically from 38% to 64%, which likely reflects the U.S. recognition of Morocco’s sovereignty over the Western Sahara.

For Tunisia and Morocco, the U.S. provides substantial amounts of foreign aid and investment compared to China. Favorable attitudes toward China are potentially higher due to the perception that Chinese involvement does not jeopardize a country’s sovereignty, nor is it seen as meddlesome in the way that U.S. involvement is sometimes viewed. In November 2020, higher percentages of Moroccans, Algerians, and Tunisians polled viewed U.S. economic development as a “critical” or “important” threat to their national security than they did Chinese economic development. Among those polled 64% of Algerians, 61% of Tunisians, and 46% of Moroccans saw U.S economic development as a threat compared to 50% of Algerians, 47% of Tunisians, and 40% of Moroccans who viewed China’s economic expansion the same way.

And while these numbers are higher compared to favorability toward the U.S., all of them are rather low, reinforcing the idea that the focus for many in the region is on local dynamics and aspirations rather than the role of any single outside actor.

Traditional European allies, which have a much more direct stake in Maghreb countries’ stability and prosperity and have therefore had much closer ties, were not able to support these countries during the pandemic. This is in part due to their struggles to meet their own needs for medical equipment and vaccines.

For instance, public sentiment toward France, the former colonial power in all three countries, is uneven and provides perhaps a more accurate reflection of the state of relations and collaboration with Maghreb partners. Of the Moroccans polled in March and April 2021, 59% had a favorable view toward France, which reflects a long history of cooperation and support among the two partners. This is compared to 46% of Tunisians and only 32% of Algerians polled, which reflects Algeria’s historically fraught and tense relationship with the former colonial power. In the cases of Morocco and Tunisia, these numbers are not substantially lower than for China and Russia.

If Russia and China are looking to make a greater impact among citizens of the Maghreb, they have a long way to go.

Intissar Fakir is a senior fellow and director of MEI’s North Africa and Sahel Program.

Aesha Soliman is a research assistant with MEI’s North Africa and Sahel Program and a second year graduate student with the University of Florida’s MA Political Science/International Relations Program.