Afghan Deaths Pile Up in Uncertainty Over U.S. Deal With Taliban 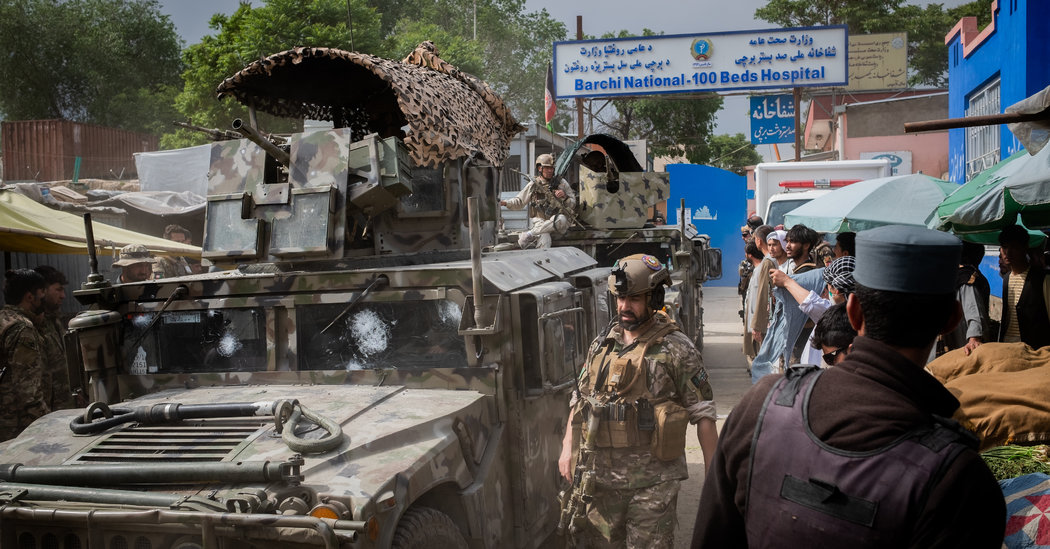 KABUL, Afghanistan â€” Two employees of Afghanistanâ€™s human rights commission were killed in Kabul on Saturday as a bomb attached to their vehicle exploded, the latest in a rising number of targeted killings in the Afghan capital.

From assassinations of religious scholars and assaults against cultural figures to widespread Taliban attacks across the country, the rise in violence is sapping the brief optimism from an American agreement with the Taliban. Under that deal, the United States would withdraw its troops, paving the way for direct negotiations between the Afghan sides to end the war in a hoped-for political settlement.

The peace deal has hit a wall over a prisoner exchange that was supposed to enable direct talks. Instead, the violence has intensified.

In a statement, Afghanistanâ€™s Independent Human Rights commission said one of its vehicles was struck by a magnetic bomb on Saturday morning, killing two employees who were on their way to work.

The victims were identified as Fatima Khalil, 24, a donor coordinator for the commission who had recently completed a degree from the American University of Central Asia in Kyrgyzstan, and Jawid Folad, a longtime driver at the commission.

â€œSo far no group has claimed responsibility, and the perpetrators of this brutal attack are not clear,â€ the statement said.

Afghan and American officials say the war has entered a complicated period of uncertainty, with an emboldened insurgency aided by regional powers exerting pressure on a struggling government by cranking up bloody attacks often without claiming them.

In a sign of the complexity of the war zone, U.S. intelligence recently concluded that the Taliban were receiving bounty money from Russian intelligence for targeting American and coalition forces last year even as they negotiating peace with the United States.

The deal, signed in February, included the exchange of 5,000 Taliban prisoners for 1,000 Afghan forces within 10 days of its signing. That exchange, which was met with resistance from the Afghan government, is only now nearing completion with the release of nearly 4,000 Taliban prisoners.

The Taliban agreed not to attack American targets, but refused a cease-fire with Afghan government forces, leaving that to direct negotiations between the Afghan sides. However, American officials said there was an informal understanding with the insurgents that they would reduce their attacks by 80 percent. Afghans have been increasingly frustrated that they havenâ€™t seen that reduction in violence, and the United States, focused on President Trumpâ€™s urgency to get out of the war, has done little to hold the Taliban to it.

â€œWe have had deep concern since the agreement between the U.S. and the Taliban was signed,â€ said Haidar Afzaly, the head of the Afghan Parliamentâ€™s Defense Committee. â€œThe only group that has benefited from that is the Taliban, who are seeing their prisoners released.â€

He said the Taliban, who were set back by frequent airstrikes in 2019, â€œare emboldened nowâ€ and â€œhave expanded their attacks.â€

Officials say the Taliban are also exploiting the gray areas of the battlefield complicated by remnants of a weakening Islamic State and the rising presence of criminal networks as the coronavirus outbreak further damages the countryâ€™s struggling economy.

The Taliban have increasingly subcontracted assassinations and targeted killings to criminal networks in the cities, a senior Afghan security official said, putting pressure on the countryâ€™s intelligence agency and law enforcement. In the countryside, the Taliban are continuing bloody attacks in the open, but they have refrained from publicizing the attacks to avoid a direct clash with the United States so as not to endanger the withdrawal of American troops.

In a sign of the conflictâ€™s complexity, among the latest victims targeted for assassinations were five prosecutors with the Afghan attorney generalâ€™s office who were fatally shot on their way to the Bagram prison to help release Taliban prisoners.

The killings added to a long list of assassinations, including two of the most prominent religious scholars in Kabul, who were killed by explosions inside their mosques. Another explosion struck the family of the renowned Afghan writer and poet Assadullah Walwaliji, killing his wife Anisa and teenage daughter Alteen.

â€œThe investigation into the killing of one scholar hadnâ€™t been completed when they martyred a second one,â€ said Mawlawi Habibullah Hasam, the head of an Afghan religious scholarsâ€™ union.

â€œWe have told the government very clearly â€” if, God forbid, another scholar is martyred, then we have no other choice but to directly blame the government as the murderer.â€

â€œThey are responsible for security,â€ Mr. Hasam said. â€œYou canâ€™t just put up a Facebook statement and say this group did it. What are you here for then?â€