A former Royal Marine commando attempting to help people flee Afghanistan’s capital Kabul has warned: “We are going to leave so many people behind”.

Paul “Pen” Farthing, who has been running an animal shelter in the city, described to Sky News his pre-dawn journey to Kabul airport on Thursday so his wife Kaisa could be evacuated.

She subsequently boarded a C-17 Globemaster military transport aircraft as she made her way to her native Norway.

But Mr Farthing was left fuming at a “scandal” that saw Kaisa fly out of Afghanistan on what appeared to be an almost empty plane, despite thousands still waiting to leave the country.

He himself has vowed to stay in Kabul until all his remaining 71 Afghan staff members and their families have also found a route out of the country and to safety away from the Taliban.

Speaking to Sky News from Afghanistan’s capital, Mr Farthing – who served in the country’s Helmand province in the mid-2000s – described how he and his wife decided to make the journey to Kabul airport while it was still dark.

This was in order to avoid the huge crowds of “at least a couple of thousand people” that are forming outside the airport each day.

“Going at night obviously has its own hazards – it was the choice of two evils and thankfully it paid off,” he said.

He also managed to get his pregnant country manager and her young son to the airport “very, very early this morning before other people had come out to make their own attempt”.

Mr Farthing revealed how aircraft are taking off from the airport every hour “regardless of whether they’re full or not”, adding: “People can’t get in, they cannot get into the airport.”

He described how someone else he knew of had attempted to make their own journey to the airport later than he and his wife had, but they “couldn’t get within one mile” of the airport.

“We are going to leave people behind, that is an absolute given,” he said of the “heartbreaking” situation in Kabul.

“This is an absolute screw-up of an evacuation. We are going to be watching some absolutely horrific scenes.” 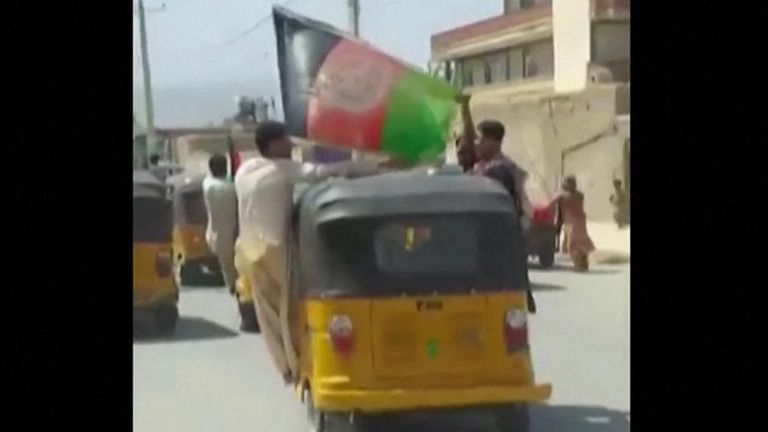 Anti-Taliban protests break out in Kabul

At least 12 people are said to have died in and around the airport since Sunday, which Mr Farthing said “shouldn’t be happening”.

He said he was “absolutely dreading” the thought of having to make the same journey to the airport in an attempt to help evacuate his remaining staff.

“At the back of my mind now is, if they do get a flight how am I going to get them to the airport?,” he added.

He described how, outside the airport, there is “no control” with some people arriving with passports and the correct documentation and others not.

Explaining his promise not to leave Afghanistan himself until his staff were also evacuated, Mr Farthing said: “We devastated their country in one fell swoop and I’m not going to do the same as politicians.

“The governments that are involved in this… they’re sat there now with no idea how they’re going to evacuate.”

He vented his anger at how Western governments had had 18 months to prepare for the pullout from Afghanistan and despaired at the “terrifying, absolutely terrifying” situation in Kabul.

“We’ll have left people behind and I can see soldiers will be seriously injured on the last day as the last planes take off,” Mr Farthing added.

Even as more companies have become outspoken on social...
Science

Spend time in a city in summer and you...
Sports

The Toronto Blue Jays are in good standing to...
Entertainment

A man is held after she died following what police believe was an "attack by a stranger" in London. Source link
Read more

Ireland tour of New Zealand could be their last

As Ireland prepare to begin a five-game, three-Test odyssey across the world’s most rugby-mad nation, the trip has already been described as a tour...
Read more

Steph McGovern has shared how she thinks she’d get on in the Strictly Come Dancing ballroom.On Monday, it was reported in The Sun that...
Read more

Press News Agency is global news network. Providing the most up-to-date and high quality News from around the World, to the right people at the right time.
Naeem T Ahmed (Editor-Publisher) Contact@PressNewsAgency.org

Even as more companies have become outspoken on social...

Spend time in a city in summer and you...

The Toronto Blue Jays are in good standing to...

University of Delhi has today decided to defer final...

The Making of â€˜High on the Hog,â€™ Bringing Black Food History to TV

There is a breathtaking moment near the end of...