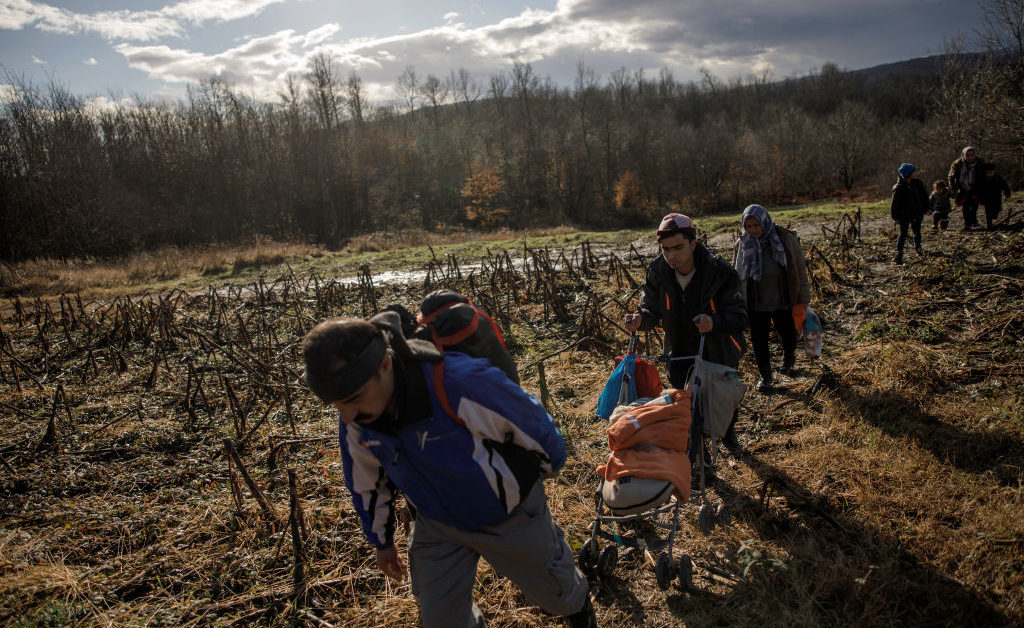 BIHAC, Bosnia-Herzegovina â€” As the first snowfall blankets the area, Afghan migrants traveling for months are starting to arrive.Â

Their target: Bosnia and Herzegovinaâ€™s border with Croatia, an EU country they hope will serve as a way station into the bloc. The route, aid workers say, has become attractive as officials methodically fortify more common routes through Greece or Italy. Afghans, they said, have been drawn to the destination for a while now, spurred on as the Taliban began sweeping through the countryside before taking power in August.Â

Ali is one of those Afghans. He has been on the move for four months since leaving his home in Lowgar, near Kabul. Now, finally near the Croatian border, he is preparing for his first attempt to cross into the EU with his family.

â€œAs a Westernized family, we had to leave or the women of my family wouldnâ€™t have stood a chance,â€ said Ali, who only provided his first name for fear of reprisal against his family in Afghanistan.

As people like Ali approach, however, rights workers say the facilities and oversight have not kept pace. There arenâ€™t enough beds to temporarily house asylum seekers, they warn. And migrants testify that they are being turned away â€” perhaps illegally â€” in an increasingly violent manner.Â

â€œItâ€™s getting even harder these days, no matter how much I try,â€ said Ramin, a 29-year-old Afghan who left last year as the Taliban closed in on his hometown near the border with Tajikistan. He also only provided his first name.

It has the ingredients, rights workers warn, of a brewing humanitarian border crisis â€”Â another for a Continent that has been grappling with them for years.Â

â€œThe cold weather is a big hazard,â€ said Kathy James of Medical Volunteers International, a grassroots group helping migrants in the border city of Velika Kladusa, an hour from BihaÄ‡. â€œPeople including young children are [often left] exposed to the elements and with nowhere safe to sleep. This winter is not going to be any different.â€Â

The challenge is one regional workers say has been percolating for years.

Over the past three years, Afghans were the most common asylum seekers at the Bosnian-Croatian border â€” a microcosm of the half a million Afghans who have applied for protection within the EU.

Thousands of the Afghans who have tried to enter Croatia in recent years simply bounced back, deported for illegally crossing the border. Many simply start the process all over again, searching for another spot along the frontier. Itâ€™s a back-and-forth dance known locally as â€œthe game.â€

Not every deportation is necessarily legal, however. Under international law, migrants have the right to apply for asylum, and denying this right is often termed a â€œpushback.â€ In 2020, more than 110 migrants testified about pushbacks at the border, with some alleging degrading treatment or torture affecting 1,656 people. The reports were collected by the Border Violence Monitoring Network, an independent group of NGOs and associations that monitors human rights violations at the EUâ€™s borders.Â

The Croatian government acknowledged the need to address violent pushbacks, promising to implement new measures. But several migrants say the practice has only hardened since mid-August, as EU countries started fretting about a mass exodus from Afghanistan.

â€œLast winter, we witnessed a higher number of families with little children crossing the Bosnian-Croatian border,â€ said Sara Kekus of the Center for Peace Studies in Zagreb. â€œThis year, having in mind the situation in Afghanistan and still no systemic EU evacuation scheme for all those fleeing the Taliban regime, there is no reason to expect a different situation.â€Â

And while official figures show an overall drop in migrants crossing into Croatia since 2016 â€”Â given the added political obstacles at each border along the way â€” the Balkan route has a resurgent appeal: Itâ€™s increasingly considered safer than the treacherous water-crossings into Italy and Greece.

â€œAs the Central Mediterranean route is looking more and more dangerous in the eyes of migrants, the appeal towards the path to Europe through the eastern frontier is growing again,â€ said Daniele Bombardi, Southeast Europe coordinator for Caritas, a charity organization working with migrants in the Balkans.Â

And, Bombardi added, there is simply not enough space to manage any notable rise in arrivals.

â€œAfter the closures of several [camps] in Bosnia, the number of available spots has decreased,â€ Bombardi said. â€œA more organized, planned approach would allow for a more dignified management of these fluxes.â€Â

In November, Bosnian officials unveiled Lipa, a new, EU-funded refugee camp on the outskirts of the northwestern town of BihaÄ‡, just a few kilometers from the border.Â

The facility was a replacement for one the International Organization for Migration had erected in March 2020, aiming to get asylum seekers out of informal settlements in the woods as the pandemic plowed across the globe. But that emergency housing was burned down only months later, just before it was slated for closure due to a lack of basic services.Â

Living in the cycle

Ali and Ramin are two of the people caught up in the border-crossing cycles, the never-ending â€œgame.â€

Ali, 19, is a relative newcomer, arriving with his three sisters and mother.

Heâ€™s afraid they wonâ€™t make it across before deep winter sets in, wary of the prospect of having to camp outside after being turned away. And as the only man traveling with four women, Ali said he feels a particular burden weighing on him.Â

Ramin, on the other hand, has been attempting to enter Croatia for over a year.Â

During the past two months, the 29-year-old has tried crossing from both BihaÄ‡ and Velika Kladusa. Each time, he said, Croatian police confiscated his phone and money before sending him back to Bosnia. His goal is to reach his wife in France and eventually reconnect with his parents in Germany, who were evacuated from Kabul through their work with a Western NGO.Â

For now, heâ€™s waiting at a temporary reception center in Usivak, a half-hour drive from Sarajevo, the Bosnian capital. Despite the restless months of futile attempts to reach the EU, Ramin conveys optimism â€”Â heâ€™s luckier, he said, than those who arenâ€™t in a formal migrant facility.Â

Still, thereâ€™s no easy resolution ahead. Many families rushed to cross as summer waned, fearing the border crossings would only get more crowded and that officials were preparing more clampdowns. For single men, the prospect of crossing is becoming near-impossible, several migrants said.

â€œThe pushbacks are getting more frequent and violent,â€ Ramin said. â€œWe are figuring out new routes, they donâ€™t always work, but we can exchange information with those reaching the area after us.â€Â

In other words, the difficulties wonâ€™t deter Ramin, Ali, or others. Failing to adequately prepare for that reality, said Bombardi, the migrant worker with Caritas, will just lead to harm.