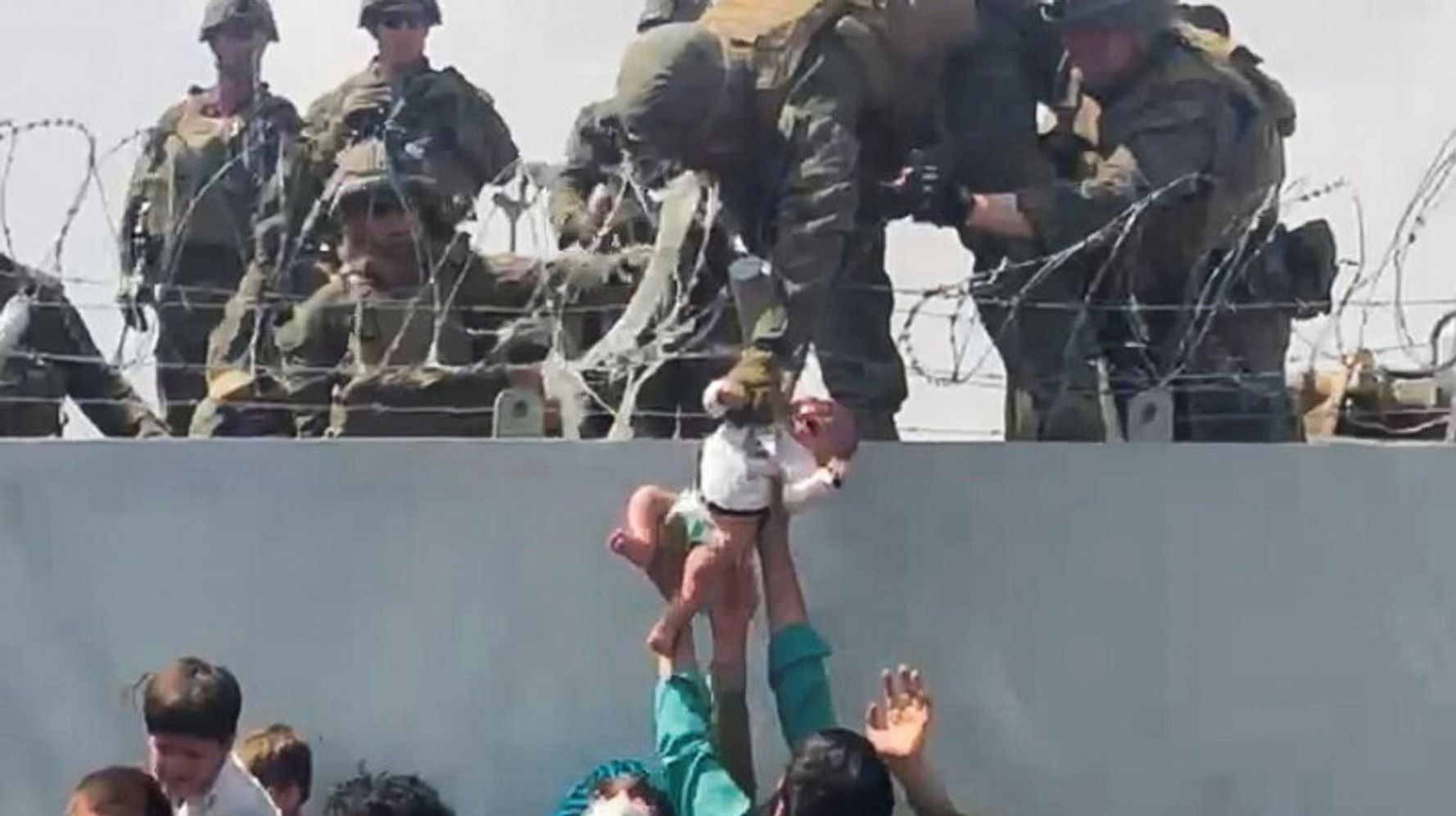 A crush of desperate Afghans outside the Kabul airport passed babies and small children above their heads so Western soldiers could raise them over a wall topped with razor wire and give them refuge from the Taliban, photos and video showed.Â

One video showed a U.S. soldier with the 24th Marine Expeditionary Unit leaning precariously over the razor wire to grab a crying baby, then passing the child to another soldier. The baby â€œwas taken to a medical treatment facility on site and cared for by medical professionals,â€ a U.S. Marines spokesperson told HuffPost.Â

The chaos & fear of people is a testament to the international communityâ€™s role in AFGâ€™s downfall & their subsequent abandonment of Afghan people. The future for AFG has bn decided for its people without its peopleâ€™s vote & now they live at the mercy of a terrorist group. #Kabul pic.twitter.com/k4bevc2eHE

Other video showed children being passed to soldiers across the top of a wall at a different part of the airport, which was not topped with wire.

A U.K. Parachute Regiment officer told U.K. newspaper The IndependentÂ that the mothers of the children were â€œgetting beaten by the Taliban.â€Â

â€œThey shouted, â€˜save my babyâ€™ and threw the babies at us, some of the babies fell on the barbed wire,â€ the unnamed officer told the paper. â€œIt was awful what happened. By the end of the night there wasnâ€™t one man among us who was not crying.â€

Another unnamed U.K. officer told Sky News that the soldiers had no choice in the chaotic situation but to accept the children.Â

It is not clear where the babies were taken, or where they will go. HuffPostâ€™s request for comment from the U.S. State Department was not immediately returned.Â

U.K. Defense Secretary Ben Wallace told Sky News that â€œobviously we cannot just take a minor on their own.â€ He speculated that the children handed over the walls of the airport compound would be joined later by family members.Â

â€œI think if you see in the footage, the child is taken â€• that will be because the family will be taken as well,â€ Wallace said.Â

Huge numbers of people are attempting to flee the Afghan capital after it fell to the Taliban on Sunday amid the withdrawal of American troops. Thousands are camped outside of the airport, including some who helped the U.S. militaryÂ during two decades of war, waiting in the heat for the possibility of being allowed on a flight out.Â

Violence outside the Kabul airport â€• the last spot still held by Western forces â€• has grown in recent days,Â despite promises from Taliban leaders to allow â€œsafe passageâ€ for those wishing to leave. Western soldiers had to work to retake control of the airport earlier this week when a flood of panicked people rushed there on foot, with many attempting to force their way onto departing aircraft.Â

Dozens of U.S. senators have urged the Biden administration to prioritize evacuations for women and girls amid reports that Taliban soldiers have been retaliating against women who engaged in civic life, despite the hard-line groupâ€™s promises to respect womenâ€™s rights.Â

Earlier in the week, another image from the frenzied situation in Afghanistan went viral, showing a crowd of Afghans sitting patiently in the belly of an American military cargo plane headed out of the country. While initial reports indicated there were 640 aboard, crew members said the actual total was 823 refugees.Â

The U.S. Department of Defense has said that up to 9,000 people could be evacuated daily from the airport once the effort ramps up.Â