After Xi’s Coronation, a Roar of Discontent Against His Hard-Line Politics 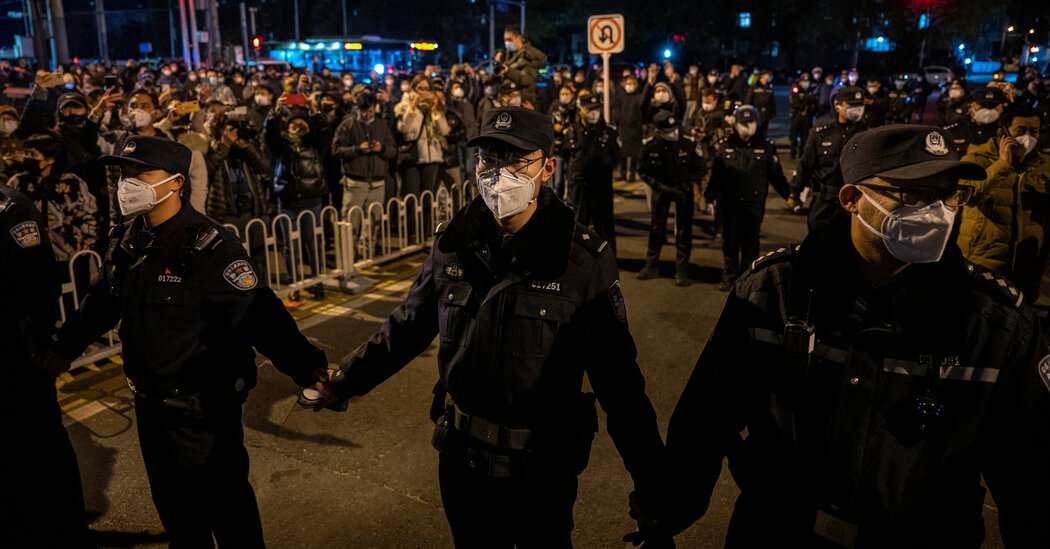 Striding out to speak to the Chinese nation just under six weeks ago, Xi Jinping, exuded regal dominance. He had just won what was likely to be another decade in power. His new team of subordinates stood out as unbending loyalists. A Communist Party congress had cemented his authoritarian agenda and promised a “new era” when China’s 1.4 billion people would stay in ever-loyal step with him and the party.

But a nationwide surge of protest has sent a stunning sign that even after one decade under Mr. Xi’s rule, a small and mostly youthful part of the population dares to imagine, even demand, another China: more liberal, less controlling, politically freer. A murmur of dissent that has survived censorship, detentions and official damnation under Mr. Xi suddenly broke into a collective roar.

“I can regain my faith in society and in a generation of youth,” Chen Min, an outspoken Chinese journalist and writer who goes by the pen name Xiao Shu, wrote in an essay this week. “Now I’ve found grounds for my faith: Brainwashing can succeed, but ultimately its success has its limits.”

Since the weekend, the police have galvanized to stamp out new protests. The authorities have been searching people’s phones, warning would-be protesters, interrogating detained participants and staging loud shows of force at potential protest sites. Vigilance will only grow after the death on Wednesday of Jiang Zemin, a former Chinese president who, more in retirement than in office, gained a political patina as a relatively mild leader. His memorial service will be held on Tuesday.

Even so, the flash flood of defiance suggests that Mr. Xi’s next years in power could be more contested and turbulent than had seemed plausible even a month ago. His hold on the party elite seems unassailable; his hold over parts of society, especially the young, seems less sure.

Members of a previously submerged minority opposed to Mr. Xi’s hard-line policies now know that they have allies, and that could make fresh opposition over other issues more likely. The government has tried to extinguish the current discontent by signaling on Thursday that the harshest and most arbitrary Covid prevention measures will be reined in. But supporters of the nascent protest movement showed that they wanted far more — to rein in the party’s authoritarian reach.

“This outrage didn’t come from just one policy, but maybe outrage pent up over three of four years,” said Edward Luo, a 23-year-old who said he witnessed the protests in Shanghai. “There’s been no channel for expression.”

The protests of hundreds or thousands over the weekend against Mr. Xi’s stringent “zero-Covid” policies sometimes flared into audacious demands for democratic goals that Mr. Xi went to war against soon after taking office in 2012.

On some university campuses, students chanted for an end to censorship. When a man at a gathering in Beijing warned that it had been infiltrated by “anti-China forces” — a trope in party discussions of pro-democracy demands — other people yelled in indignation.

Understand the Protests in China

“We citizens all have fundamental rights, we have the right to protest and to speak out, but do we really have them?” a raw-voiced young woman told a crowd of hundreds in Chengdu, a city in southwest China.

Mr. Xi has expanded China’s security apparatus into a formidable machine to quash defiance, making a repeat of the pro-democracy protest movement of 1989 much less likely. But longer term, the protests may produce a powerful and, to Mr. Xi and the party, potentially troublesome afterglow.

The crowds calling for political change marked the resurgence of a buried stream of dissenting ideas that had seemed spent after 10 years of Mr. Xi. This upswelling has survived in crevices online; in small, private bookstores; and in informal social circles that bring together like-minded people from different generations.

“It’s like some national subconsciousness that resurfaces,” said Geremie R. Barmé, a scholar in New Zealand who studies dissent in China. “Now it’s resurfaced again, this projection of self and of rights and ideas.”

The protesters are a small minority of the population, and those who voiced the boldest political demands are an even smaller fringe. A number of them may come to regret their outspokenness, under official pressure, or because of career concerns in a society where the party controls opportunities, or simply because they change their minds. But, for some protesters, the experiences and connections formed may last.

“This generation of university students will almost certainly be more restive than the last few cohorts that have passed through since 1989,” said Mary Gallagher, a professor at the University of Michigan who studies authoritarian politics in China. “And they have more reason to be: Economically, the future looks bleak.”

For much of the past three years, China’s war to keep Covid cases to near zero embodied a bargain that Mr. Xi presented to the public: accept his strict policies and in return enjoy a degree of safety and stability out of reach in the United States and other countries suffering waves of mass infection. And, for much of that time, it was a deal that many Chinese people accepted, if not enthusiastically endorsed.

But public support eroded markedly this year. The Omicron variant’s relentless march made urban lockdowns more frequent and grueling. Some Chinese people have watched with envy as other countries returned to something like normal. And the zero-Covid policies were exacerbating a painful economic slowdown.

In turn, some critics of Mr. Xi’s pandemic policies have come to see them as embodying broader dangers in his sweeping, authoritarian ways.

Middle-class Chinese people who before could live relatively oblivious to the party’s political demands, have become frustrated over the intrusions from Covid officials and rules restricting travel and herding residents into mass quarantine sites. That became more so after the congress in October, when Mr. Xi won a third five-year term and unveiled his own leadership lineup, leaving less room to blame other officials for mistakes. The lack of a plausible successor in the new lineup implies that Mr. Xi could stay in power for at least 10 more years.

During the congress, a lone man protested on the Sitong Bridge in northwest Beijing, unfurling a banner denouncing Mr. Xi as a “despotic traitor.” Despite censorship, word of the audacious act rippled across China, especially among students and professionals with some access to overseas news.

“Before Sitong Bridge, I never wanted to say too much about politics,” said a 21-year old student in Beijing who said that police officers stopped her from joining a proposed protest gathering on Monday. She asked to be identified with only her surname, Wang, fearing more trouble from the police.

The buildup of dissatisfaction among some groups in China also appeared to reflect ideas, information and images flowing from the rest of the world, including through Chinese students and professionals abroad, said Jeffrey Wasserstrom, a professor of Chinese history at the University of Irvine.

For Chinese people, travel inside the country and beyond remains difficult and expensive, but they have seen their leader, Mr. Xi, attending summits abroad without a mask.

While Chinese citizens have remained under stringent testing rules and are wearing masks in most public places, many also have been watching mask-free crowds at the World Cup. After Chinese broadcasts began curtailing the images, a group emerged on Weibo, China’s popular social media service, discussing the jolting difference.

“There’s a porousness to the efforts to have even the most totalitarian control over the flow of information,” Professor Wasserstrom said. “There are still people moving across borders and communicating.”

After so many years without large-scale urban protests in China, and then the isolation of the Covid years, the experience — or even watching it online from a distance — was almost unworldly for some. Now that experience may embolden them to rebel again.

“This was the first time we heard such intense and frank resistance in our own mother tongue, and that was very special,” said May Hu, who said she watched a livestream of the Shanghai protests on Instagram from her home in Hunan Province, southern China. She preferred to use her English personal name to try to avoid official reprisals. “I think it left a lot of people feeling that there is hope.”

But while an alternative China, inspired by ideas of dissent and democracy, has partly found its voice, Mr. Xi is sure to reassert his idea of China, one of firm order and visceral distrust of liberal ideas.

Mr. Xi’s advisers are likely to be figuring out how to redouble censorship and ideological indoctrination in universities. In April 2013, months after coming to power, Mr. Xi approved an edict calling for an offensive against electoral democracy, freedom of the press and constitutional limits on state power — precisely the ideas that groups of students and residents have called for in recent days.

Now Mr. Xi’s second decade at the top may commence with another ideological offensive to reassert the party’s hold over minds, especially among students and young workers.

“It will be a grinding, planned-out, constant response,” said Mr. Barmé, the academician in New Zealand. “This is a system with nearly 100 million party members stretching into every aspect of society.”