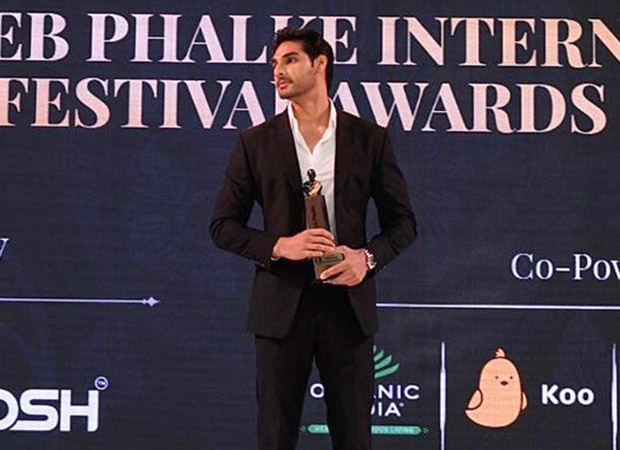 Actor Ahan Shetty is soaking in all the love coming his way for his performance in his big-ticket film Tadap. The film also marked Ahan’s debut in the entertainment industry. The actor has more reasons to celebrate as he wins Dadasaheb Phalke International Film Festival Award for – Best Actor Debut for his debut film Tadap. The International Film Festival Awards 2022 was held in Mumbai on Sunday and proved to be a star-studded ceremony.

After winning the prestigious award, the actor took to his social media to express his gratitude. Taking to Instagram he shared a picture of himself from the award night. In the picture, he looked absolute dapper as he was dressed in a black tuxedo which he teamed up with a white shirt. He can be seen holding the glittering trophy while posing for the camera. Alongside the picture, Ahan in the caption wrote, “Grateful and honoured to receive the ‘Best Actor’ award for Tadap at Dadasaheb Phalke International Film Festival Awards 2022. Thank you to everyone for the love and support.”

Helmed by Milan Luthria, Tadap hit theatres in December 2021 and starred Ahan Shetty and Tara Sutaria in the lead roles. The film was the Hindi remake of the Telugu film RX100. The film revolves around the love story between Ishaan and Ramisa played by Ahan and Tara respectively. The story takes a sharp turn as Ahan deals with heartache. The movie also features Suniel Shetty, Sikandar Kher, Sharat Saxena, and Amit Sadh. The film has been produced by Milan Luthria and Sajid Nadiadwala.