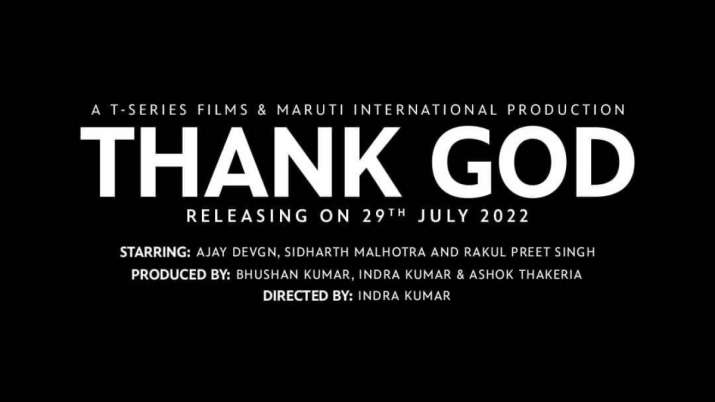 Actors Ajay Devgn, Sidharth Malhotra and Rakul Preet Singh-led slice of life comedy “Thank God” is set to hit cinema halls on July 29, 2022, makers announced on Sunday. “Thank God” is helmed by filmmaker Indra Kumar and produced by Bhushan Kumar, Krishan Kumar, Ashok Thakeria, Sunir Kheterpal, Deepak Mukut, Anand Pandit and Markand Adhikari. It is co-produced by Yash Shah. “The much-anticipated film ‘Thank God’ is all set to bring you joy next year. This hilarious slice of life film with a message will release on 29th July 2022,” a note from the makers read.

Kumar has helmed dramas like “Dil”, “Beta”, “Ishq”, “Mann” in the ’90s before changing gears and directing comedy franchises like “Masti” and “Dhamaal”.

In an earlier interview with PTI, Malhotra had said “Thank God” is a sweet, contemporary film with a “lovely message”.

“For me, it is all about the messaging and what the film is trying to say. I assure people that they will be surprised. ‘Thank God’ talks about gratitude, which is needed today more than ever,” the “Shershaah” actor said.Â