Akshay Kumar felt like a ‘hero’ after winning stuffed toys for his daughter, shares adorable photo 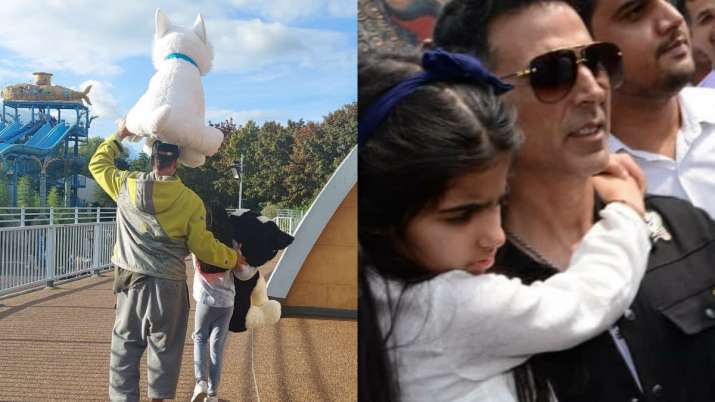 Akshay Kumar took his daughter Nitara to an amusement park, where he felt closest to a hero after winning two stuffed toys for her. He calls it the ‘Best Day Ever’ as he was able to bring a smile to his daughter’s face. Taking to his social media, the actor dropped a precious video and photo of the duo and wrote, “Took my daughter to an amusement park yesterday. Looking at her happy smile on winning not one but two stuffed toys for her was hands down the closest I’ve felt to being a hero. #BestDayEver.” While their face isn’t visible, the father-daughter duo is seen walking together as they hold big soft toys.

Akshay Kumar, ‘the Khiladi of Bollywood’ recently turned 55. On the celebratory occasion, the actor’s better half, Twinkle Khanna, dropped a special birthday post for him, calling him a scrabble master. Twinkle took to her social media and shared an adorable picture with the actor. Sharing the post, she wrote, “The Birthday Boy who wins at every game! Yes, he beat me at Backgammon. Then he annihilated an Oxford chap and a tag team of four players, all against him, in a game of, wait for this, Scrabble! The best part, a friend got him a halwa cake just like the one his mother used to make for him every year on his birthday. Happy Birthday my Scrabble Master”.

On the professional front, Akshay was most recently seen in Cuttputlli alongside Rakul Preet Singh and Sargun Mehta, which premiered on Disney+ Hotstar. The Ranjit Tiwari directorial was a remake of the 2018 Tamil film Ratsasan. The film garnered a mixed reception at the box office. Now, the actor has a slew of films lined up. ALSO READ: Akshay Kumar’s road safety ad under fire for allegedly promoting dowry

Next, he will be seen in OMG 2- Oh My God! 2 with Yami Gautam and Pankaj Tripathi. He will be seen playing the role of Major General Ian Cardozo. Also, he has Selfiee with Emraan Hashmi. Besides this, he also has Bade Miyan Chote Miyan in which he will be sharing the screen with Tiger Shroff. He also has Capsule Gill and Soorarai Pottru remake, which is yet-to-be-titled. ALSO READ: Akshay Kumar Birthday: From Bade Miyan Chote Miyan to Ram Setu, here’s a look at his upcoming films

Also, he will star in Ram Setu, directed by Abhishek Sharma, Akshay Kumar will be seen playing the role of an archaeologist and in the first look of the film, he is seen sporting a salt and pepper beard and long curly hair. Co-star Jacqueline Fernandez, it is billed as an action-adventure-drama. It tells a story rooted in Indian cultural and historical heritage. The film also stars Jacqueline Fernandez and Nushrratt Bharuccha and is expected to release in theatres on October 24, 2022.