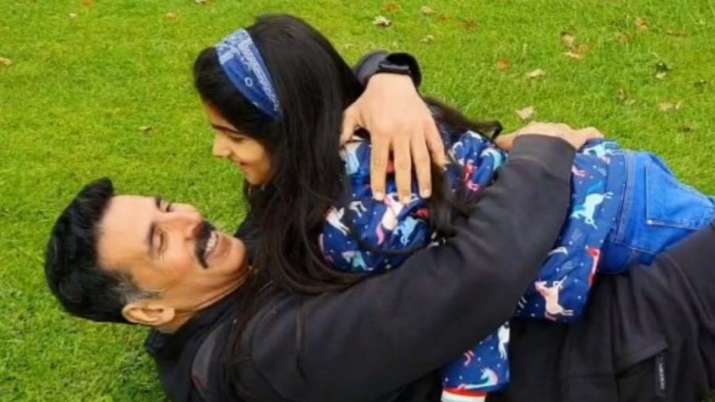 Akshay Kumar‘s daughter Nitara has turned a year older. As she celebrates her 10th birthday, the Bollywood star took to social media to share an adorable video of theirs. He shared how she’s growing up so fast in a heartwarming message. He also compared to a time when she was little and he held her hand and now that she is growing up, his daughter holds her own shopping bags.

“From holding my hand to now holding her own shopping bag, my baby girl is growing up way too fast. All of 10 years old today…my wish for you this birthday and always is…the best the world has to offer. Daddy loves you,” Akshay wrote on Instagram and Twitter. Watch the video here:

It was only recently, that Akshay shared how his daughter Nitara makes him feel like a true hero. The actor took to his Instagram to share a video and a picture of himself roaming around an amusement park with Nitara. He captioned his Instagram post: “Took my daughter to an amusement park yesterday. Looking at her happy smile on winning not one but two stuffed toys for her was hands down the closest I’ve felt to being a hero. #BestDayEver.”

In the picture and the video, Akshay and Nitara can be seen with their backs facing the camera and holding soft toys while roaming around the park. The actor is at his casual best in loose clothing with a huge soft toy over his head.

On the work front, Akshay’s four films have tanked this year, including the theatrical releases of ‘Bachchhan Paandey’, ‘Samrat Prithviraj’, ‘Raksha Bandhan’ and the streaming movie ‘Cuttputlli’. A Hindi remake of the 2018 Tamil film ‘Ratsasan’, ‘Cuttputlli’ has reportedly become one of the least watched films on OTT.

Heart of Stone: Alia Bhatt looks no less than a wonder woman in Hollywood debut opposite Gal Gadot