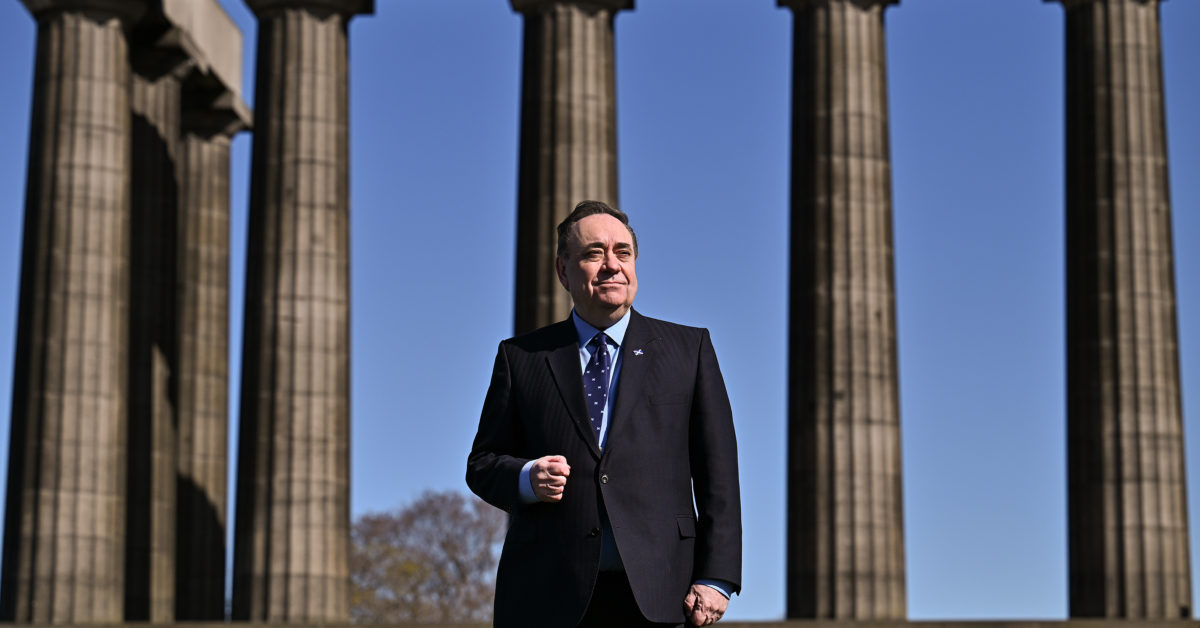 EDINBURGH â€”Â While most of Westminster was in the pub, POLITICOâ€™s London Playbook caught up with Alex Salmond during a campaign stop for the former Scottish first ministerâ€™s new pro-independence Alba Party.

Alba hopes to shake up May 6 elections to the Scottish parliament, a battle that could ratchet up the pressure on U.K. Prime Minister Boris Johnson to grant a second Scottish independence referendum.

Salmond is looking to amass a â€œsupermajorityâ€ for independence â€” and thereâ€™s no love lost between the former Scottish National Party leader and his successor as first minister, Nicola Sturgeon. The pair have been embroiled in a bitter public feud over her governmentâ€™s handling of sexual harassment claims against him.

Speaking from the opposite end of a bench atop Edinburghâ€™s Calton Hill, Salmond was happiest when given an opportunity to lay into broadcasters who he feels are unfairly excluding him from TV debates â€” such as the one taking place Tuesday night on STV.

Salmond came armed with a news line following the death of Prince Philip, the Duke of Edinburgh and the queenâ€™s husband. The move has prompted eight days of national mourning in the U.K. Having met Prince Philip multiple times when first minister, Salmond said although they disagreed on many things, he â€œnever found him taking the slightest offense from any of our disagreements â€” in fact he seemed to enjoy them.â€ And, offering a word of caution to broadcasters and other politicians, Salmond said â€œthe idea of prolonged mourning would not have been to his liking.â€

Alba candidate Margaret Lynch sparked a social media storm when the Times reported she told a private womenâ€™s conference that Stonewall Scotland and another Scottish group supported a declaration that advocates lowering the age of consent to 10. Asked publicly about this for the first time, Salmond stood by his candidate and claimed she had been misrepresented. He told Playbook that â€œnot one single paper has actually reported what she said â€¦ the concern that was expressed was that two Scottish organizations subscribe to an international declaration where the language, to say the least, is somewhat difficult.â€ The group that penned the international declaration has since released a statement confirming it has never advocated lowering the age of consent and describing the claims as â€œdangerous and irresponsible.â€

As for Salmondâ€™s dream of a pro-independence supermajority in Holyrood led by SNP constituency and Alba members on the regional list, things arenâ€™t looking rosy just yet. POLITICOâ€™s Poll of Polls has Alba on just 3 percent, which if replicated on May 6 would see the party unlikely to pick up any seats. Salmond isnâ€™t worried yet though, saying this will pick up as the electorate learns about his party. As evidence, he tells Playbook he has surveyed 12 people atop Calton Hill. He says half of them are already intending to vote for his party and the other half hadnâ€™t heard of it. After explaining the electoral system to the latter, Salmond claims they are now all voting for Alba.

On talking to Whitehall about independence

If a supermajority is achieved, Salmond has said negotiations with Whitehall about Scotlandâ€™s future should begin within a week. He doesnâ€™t accept the game is up if thatâ€™s a short conversation involving the word â€œno,â€ pointing to a â€œrange of other tactics you can employ to force [Boris Johnsonâ€™s] hand.â€ The always-modest Salmond brings up his negotiations with David Cameron in 2011 as an example, insisting he persuaded Cameron â€œin the right directionâ€ toward a Section 30 referendum as the least-worst option for the U.K. government.

On his shift to independence fundamentalism

Once known as a â€œgradualistâ€ in the SNP seeking a slow approach to building support for independence, Salmond now strikes a less conciliatory figure. He pivots a question into an attack on his former protÃ©gÃ©-turned-foe Sturgeon, over her indication a referendum could be delayed to 2024. This, he says, is â€œnot really an inspiring rallying call to the independence movement.â€

On his own fitness for office

Salmondâ€™s go-to line when asked about the sexual harassment complaints brought against him is to say a majority-female jury acquitted him of all criminal charges last March. Despite this, his defense team admitted some inappropriate behavior in court â€” which Salmond is still unwilling to apologize for or even acknowledge, telling Playbook, â€œI know exactly what Iâ€™ve done and not done, believe me.â€ A recent poll shows two-thirds of voters believe he is unfit for office, which he blames on media coverage around the case.

Asked by the BBC last week four times if he believes Russia was behind the 2018 Salisbury poisonings, Salmond â€” who hosts a show on Kremlin-backed RT â€” refused to directly say he thought so. Given the opportunity here to answer the same question, he went slightly further than he did on the BBC but still without directly condemning Russia. â€œI donâ€™t think the two people associated with the Russian security services were in Salisbury to look at the size of the spire,â€ he said. â€œEqually, Iâ€™ve accepted that we should be guided by the results of the international bodies in these matters.â€ He maintains it was â€œimproperâ€ for the BBC to ask him this question.

â€¦ and on Eurovision

After Adam Price, leader of the pro-Welsh independence Plaid party, told Playbook the music of Tom Jones and Charlotte Church would help an independent Wales flourish at Eurovision, Salmond instantly named Leith rockers The Proclaimers. Nothing to do, of course, with the fact the pair announced they were backing Alba last week.