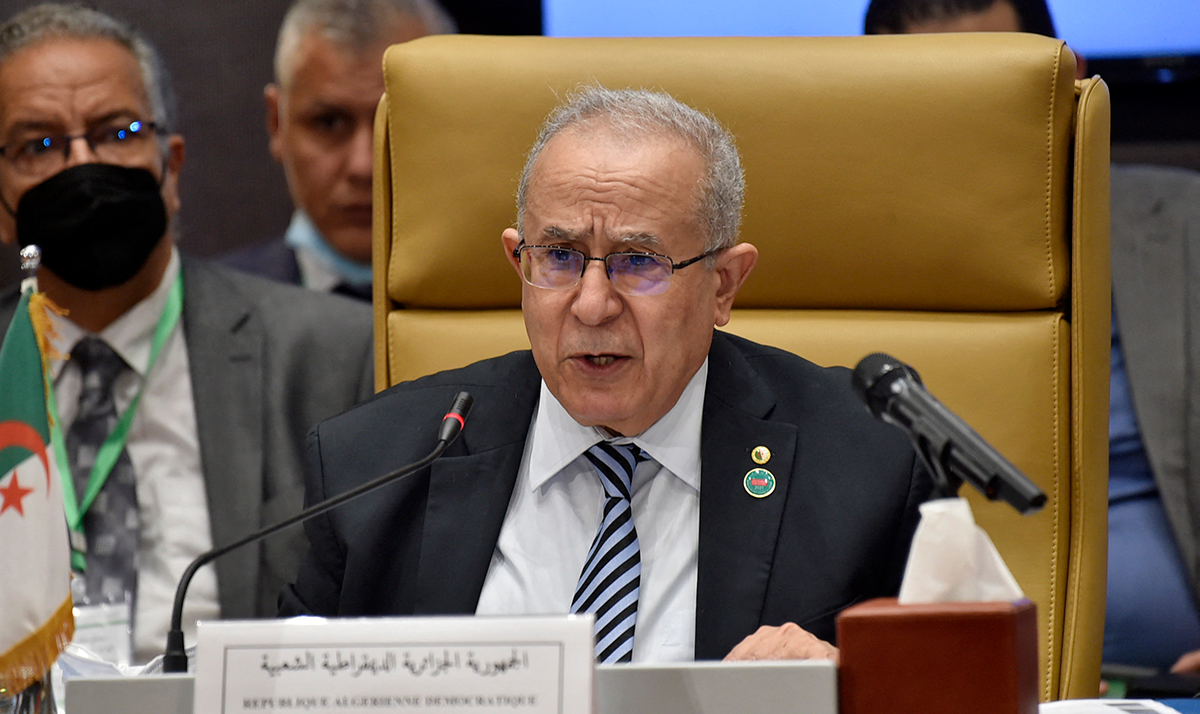 On Oct. 2, Algerian authorities recalled their ambassador to France for consultations amid rising tensions between the two countries. This followed France’s imposition of stricter restrictions on visa quotas for Algerians and critical comments from the French president, Emmanuel Macron. Relations between France and Algeria have long been complicated for historical reasons, but this latest episode comes after a bigger diplomatic crisis between Algeria and Morocco, which resulted in Algiers announcing on Aug. 25 that it was cutting diplomatic relations with Rabat. These actions demonstrate Algeria’s newly assertive foreign policy approach that capitalizes on its military and diplomatic corps. This includes high-level meetings of Army Chief of Staff Said Chengriha and frequent visits by Foreign Minister Ramtane Lamamra to Algeria’s neighbors to rehabilitate the country’s image after years of absence.

Such efforts at the highest level come amid a growing sense of isolation as Algeria struggles with its traditional foreign policy approach. The North African country has long been part of the radical camp that still refuses any normalization with Israel. In his statements, President Abdelmadjid  Tebboune denies that Algeria is isolated and insists that the country is a regional power. This paradox requires a closer look at Algeria’s “assets” and “liabilities” on the international scene. Even if it is often presented as merely historic and traditional, Algeria’s foreign policy is also the product of perpetual shifts within the system and society.

Following its independence in 1962, Algeria based its foreign policy approach on a set of long-standing principles. Inspired by its anti-colonial struggle, Algiers stood up as a voice of oppressed people, a defender of states’ sovereignty, and an opponent of foreign military interventions. It adopted self-determination and anti-colonial causes as a diplomatic tool to expand its geostrategic influence, especially on the African continent. Algerian authorities continuously expressed solidarity with and provided diplomatic, financial, and logistical support for African liberation movements, the Palestinian people, and the Polisario Front.

Although Algeria was able to make its mark internationally from independence until the late 1980s, challenging circumstances, including the civil war, put an end to its foreign policy ambitions. After 10 years of terrorism and 20 years under former President Abdelaziz Bouteflika, it is debatable whether Algeria’s voice is still even heard on the anti-colonial and self-determination dossiers. This is despite the regular attempts of Algerian officials to reinvigorate the country’s diplomatic corps. The return of Foreign Minister Lamamra and his regional efforts in Egypt, the Sahel, and at the African Union suggest that Algeria now wants to reclaim its leading role in diplomacy and mediation. As it tries to do so, however, Algeria faces a new and more challenging reality, both regionally and internationally.

Amid a new trend of normalization with Israel and the ongoing military conflicts and political instability in the sub-Saharan and North African regions, Algeria has not been successful in building support for its principled positions. In fact, as other countries in the neighborhood opt for a realist agenda, the Algerian authorities have tried to protect the country’s legacy with idealistic, and potentially impractical, rhetoric.

Since independence, Algeria has been a strong advocate of regional cooperation over unilateral political and military interventions. It joined Arab regional efforts against Israeli forces in 1967 and 1973, and provided its mediation services to address conflicts and diplomatic tensions, including during the Iran hostage crisis in 1979. It is crucial to note the scope of Algeria’s past regional and international engagement when assessing its diplomatic posture today.

During the era of former President Bouteflika, however, Algeria’s diplomatic efforts were reduced to counter-terrorism cooperation. Even in the midst of regional disorder, Algeria did not interfere in either Libya or Mali and always preferred a seemingly unreachable political settlement. Nevertheless, President Tebboune’s ambitions of playing a greater regional role show a willingness to re-engage the diplomatic and military corps. After the devastating civil war in the 1990s, Algeria capitalized on its military power to advance itself regionally. This power may allow Algeria to impose its limits, as President Tebboune intended to do in Libya. France’s planned withdrawal from the Sahel may also suggest an opportunity for Algerian engagement. In addition, Said Chengriha was recently received in Moscow to discuss regional developments, pointing to the potential for further Algerian-Russian coordination as well.

Since the inauguration of President Tebboune in December 2019, the Algerian authorities seem to have developed a more interventionist vision. Algeria passed a new constitution in November 2020 that allows, for the first time, deployment of troops abroad with a two-third majority of parliament. The diplomatic corps is already engaged on a number of regional disputes with the recent appointment of several presidential envoys. As it seeks to realize its aspirations, Algeria will also have to face a number of logistical and diplomatic hurdles. The Bouteflika administration’s complete absence from the regional scene limits the diplomatic capacity of its successor, especially in light of the growing tensions with Morocco. Despite Algeria’s historical reputation, actions matter more than words and intentions. Even if the political willingness is there, the current administration cannot strengthen its regional role without the support of neighboring countries and a stable domestic situation.

As countries in the Arab region took to the streets again in 2019, Algerians also hoped for a better future. On Feb. 22, 2019, Algeria witnessed the beginning of an unprecedented protest movement that forced former President Bouteflika to resign in April 2019. These protests, known as the Hirak, have resulted in a transformative political and social process, the outcome of which will become clear in time. The authorities continue to promise a “New Algeria” that reclaims the country’s place on the international scene, yet the ongoing crises challenge the capacity of Algerian institutions and the political establishment to deliver on such promises.

On the political and social levels, there is a serious trust deficit between the authorities and the population. When President Tebboune was inaugurated in December 2019, he vowed to include the young activists of the Hirak, but activists and journalists are still being prosecuted for political reasons. The low voter turnout in the constitutional referendum and legislative elections underscores the Tebboune administration’s lack of popular legitimacy. The authorities’ handling of recent crises such as the wildfires has also demonstrated the limitations of the state’s resources.

On the economic level, Algeria is facing a paralyzing crisis that may result in social upheaval. An important part of President Tebboune’s electoral program was his promise to revive the economy, especially with the help of the young. However, the population continues to struggle with difficult living conditions, especially in rural and poorer areas. Reports on Algeria’s economic situation point to a set of worrying indicators. These are likely the reason for the authorities’ discreet austerity measures to protect the remainder of the country’s foreign exchange reserves, estimated at around $47 billion. Besides that, there is no clear vision for the future of the Algerian economy once these reserves are depleted. For now, however, the recent increase in oil prices could help the government to temporarily address the situation by using the same socioeconomic measures that resulted in the current crisis.

The Algerian authorities are attempting to manage an unpredictable and potentially chaotic domestic situation. Officials have recently used foreign policy as a tool to reconnect with the population, although it is becoming increasingly challenging for the authorities to defend their narrative. According to the official rhetoric, Algeria is a victim of a foreign conspiracy to threaten its stability. To that end, the High Security Council designated both the Islamist Rachad and separatist Movement for the Self-Determination of Kabylie (MAK) groups as terrorist organizations. Authorities often blame domestic issues on these two entities to avoid serious accountability. Furthermore, MAK also served as part of the reasoning behind Algiers’ recent decision to cut diplomatic relations with Rabat.

Algeria’s troubling domestic situation could impair its diplomatic return. The authorities are all too keen to regain their regional and international role, but that remains complicated without serious popular legitimacy to empower officials. Algeria will continue to serve as a viable and trusted security partner for the international community. It will provide assistance and diplomatic support, as was the case with Lamamra’s recent visits to Tunisia. The country may even try to attract more investors to its promising energy market. Still, Algeria will remain vulnerable if it does not solve its internal issues. Regional influence will only be sustainable if it is supported by viable and stable institutions — an objective that Algeria’s numerous challenges so far have prevented it from realizing.

In the end, the Tebboune administration sees foreign policy as a crucial tool for ensuring its continuity. In his local interviews the president has stressed his plan for the country’s return to the international scene. However, there are no guarantees, even with the current powerful diplomatic corps, if he does not consider the political limitations of Algeria’s institutions and system. Any major policy shift would require the system’s consensus and the people’s “approval.” Looking at Algeria’s present situation, President Tebboune has neither.

Zine Labidine Ghebouli is a political analyst and postgraduate scholar at the University of Glasgow, where he focuses on Euro-Mediterranean affairs. His research covers political and security dynamics in Algeria. Zine previously worked as a junior consultant at the Asfari Institute for Civil Society and Citizenship. The views expressed in this piece are his own.