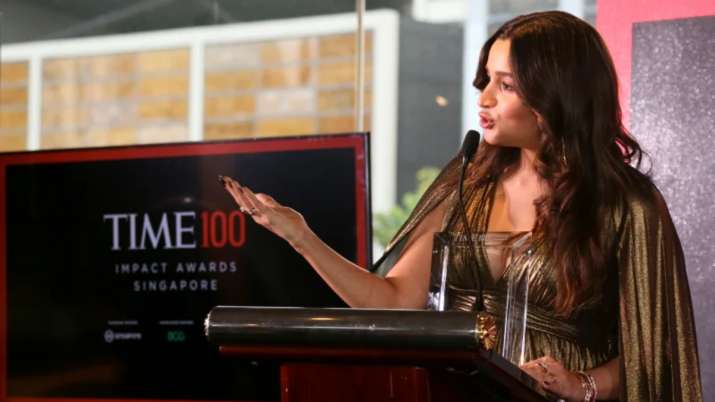 Alia Bhatt is all set to embrace motherhood. But that hasn’t stopped the actress from fulfilling her professional commitments. The actress who is the newest recipient of TIME100 Impact Awards collected her award at the National Gallery Singapore on Sunday. As the Bollywood star carefully stepped up on the stage cradling her baby bump in a metallic gown, the actress gave a powerful speech.

She spoke about accepting her flaws and advocated being real, she kept humour alive in her speech. The actress said Perfection is boring and went on to list down things she’s flawed at in contrast to pointing out things that make her a woman of substance. “I feel a tiny bit of pressure, pressure to say something intelligent and be good and really make an impact. I have been thinking a lot about what it means to make an impact and I’ve been wondering whether, when I started out, I did so with the intention of making an impact. And the answer is, yes,” she said.

As she spoke about how grateful she is to be there on the stage, Alia shared the good and the bad she’s made of.  She shared, “I want to take a moment with you all to celebrate my flaws along with my strengths. For example, I’m terrible at spelling. Like, really bad. But I do know what to say to someone who’s vulnerable. I have no sense of geography. Zero. I do not get directions. But I have a deep sense of respect and regard for different cultures. My general knowledge is widely known to be weak. But my emotional intelligence is something that I’ve worked really hard to cultivate. I have a tendency to be hard on myself with regards to my weight and my appearance. But I never say no to a french fry because, you know, YOLO.”

She followed with a set of thank yous to her parents – Soni Razdan & Mahesh Bhatt and her sister Shaheen Bhatt. She also included husband Ranbir Kapoor‘s name in the list and thanked all of them for ‘putting up with her. In conclusion, the actress said she strives to make an impact and gave a shoutout to her little one.

“When it comes to making an impact, I hope I can continue to do so in whatever way possible. But for now, tonight, this award has genuinely made an impact on me—me and my little one, who has relentlessly kicked me throughout this speech. Thank you so much,” she said in conclusion.

Women of Ponniyin Selvan I: Aishwarya, Trisha, Sobhita scrutinize their characters in PS 1 ​