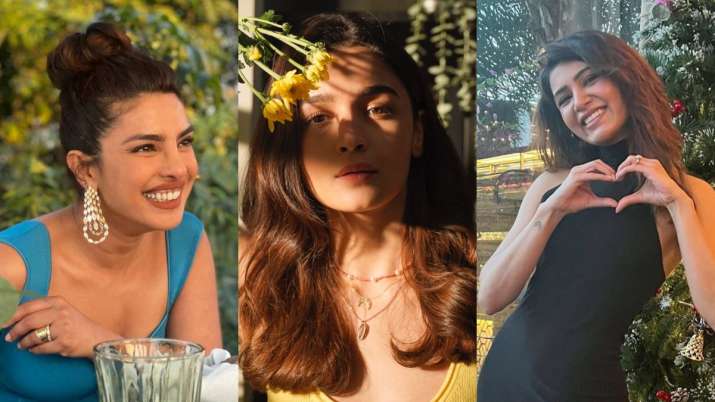 Amidst wedding rumours with actor and beau Ranbir Kapoor, Bollywood actress Alia Bhatt on Monday dropped some breathtakingly beautiful pictures with perfect sunlight falling on her face. It wasn’t just a visual treat for her fans and followers but also for her colleagues from the industry including Samantha Ruth Prabhu and Priyanka Chopra who praised her. Sharing the stunning shot, Alia simplyÂ captioned it with a single yellow chick emoji.Â

Alia looked every inch beautiful in the sunkissed picture. She was seen wearing a yellow tank top as she posed with some yellow flowers partially covering her face. To complete the look she accessorised it with golden chains.Â

In no time, Alia’s post was bombarded with sweet reactions from her fans and friends from the industry. Actresses Priyanka Chopra, and Samantha Ruth Prabhu were the first ones to drop their reactions. Priyanka who will be sharing screen space with Alia in Jee Le Zaraa wrote, “beautiful,” adding a heart-eyed emoji. Samantha Ruth Prabhu commented a red-heart emoji. One of the users wrote, “You’re a sunshine.” Another called her “Queen of Bollywood.”

On the work front, Alia has given some spectacle performances inÂ SS Rajamouli’s RRR and Sanjay Leela Bhansali’s Gangubai Kathiawadi. The actress has successfully carved a niche for herself. She will next be seen inÂ ‘Brahmastra’.Â Directed by Ayan Mukerji, ‘Brahmastra’ has been in the making for the last seven years. Ranbir and Alia had also fallen in love on the sets of the film. It will release in theatres on September 9 in five Indian languages – Hindi, Tamil, Telugu, Malayalam and Kannada. Amitabh Bachchan, Mouni Roy and Nagarjuna Akkineni are also a part of the film.Â

If rumours are to be believed then it is expected that Alia Bhatt and Ranbir Kapoor will soon be tying the knot. They are expected to get married in the second week of April. However, there’s no official confirmation from either party.Â