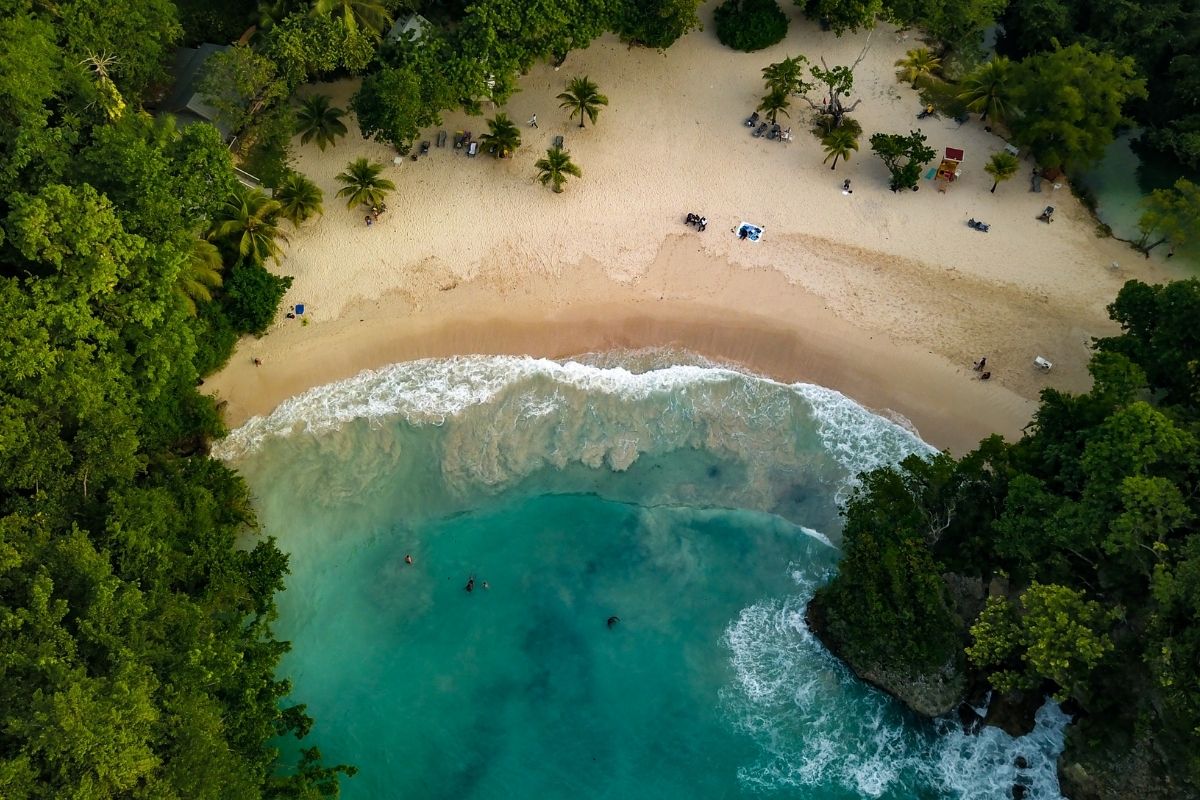 Although the final production costs have yet to be confirmed, the movie, which experienced severe delays owing to the ongoing COVID-19 pandemic, has reportedly cost a whopping $245 million – not least because of the various filming locations used.

Indeed, 007 is a notorious jet-setter, fighting bad guys in the snowy tundra, on hot beaches, and even in outer space. Occasionally, he also finds the time to squeeze in a little holiday.

For the past 18 months, all Bond fans have had to cling to are the trailers, which have teased some incredible locations from all around the world.

Ahead of its release on October 8, Newsweek breaks down all the filming locations used in No Time To Die.

**WARNING: Mild spoilers for No Time to Die ahead**

Where Was Bond 25 Filmed?

Even before Daniel Craig’s stint as James Bond, 007 long had ties to Jamaica – from Dr. No (1962) to Live and Let Die (1973). Author Ian Fleming also had a home there himself. So it makes perfect sense that the agent would wind up retiring on the island, the spiritual home of his character.

Bond’s home in No Time to Die was specially-built on the shore, near Port Antonio. The island also doubled for Cuba later on in the movie, with exterior shots taken in Kingston, the seventh largest natural harbor in the world.

Barbara Broccoli, the franchise’s producer, said staying in Fleming’s former Jamaica residence helped her understand the importance of this place for Bond.

She said: “I went to Jamaica for the 50th anniversary of the film series and stayed in Fleming’s house, which was a real revelation to me. Bond has always saved the world.

“But what I suddenly realised, actually being in the room in which he wrote his novels and short stories, was that while Fleming was saying that Bond was saving the world, he was looking out at the natural beauty of the world.

“It is not just the cosmopolitan world as we know it but the incredible vibrancy of the natural world, the coral reefs of the ocean, the flowers and the fauna and the birds.

“Fleming loved the beauty of the world and we wanted that to feed into Bond’s story in this film.”

The trailer showcases some incredible scenes in Matera, Italy. Though the town has not featured in the franchise before, in No Time to Die it serves as a breathtaking arena for Bond, as he rails round the streets in his Aston Martin DB5.

Special effects supervisor Chris Corbould commented: “It’s [Matera] a city with such a rich history and it looks amazing. Then throw the car into the equation, which is doing more than it’s done since Goldfinger in 1964.

“We had a fleeting glimpse of it in Skyfall, but Goldfinger is its last big sequence. And now for it to come back in all its glory and have a spectacular sequence again, the audience will love it.”

The Italy car chase quite literally sets the wheels in motion for Bond, before the iconic pre-title sequence.

Director Cary Joji Fukunaga said: “Italy was the perfect setting because they drive off into the sunset at the end of Spectre and where else is as romantic as Italy? And the ancient town of Matera was just amazing; we had to shoot there.”

The historic city is not the only Italian scene, as later the train station in Sapri is used.

As we know, Madeleine Swann’s (Léa Seydoux) father Mr. White is Scandinavian, and Norway is an important place to begin the story with a flashback sequence.

It served as the opening location for the movie, with the White family easily being able to hide in the forests and mountains of the region.

Broccoli said: “We knew we were going to go to Scandinavia.

“It needed to be somewhere where they would have hidden as a family. It would have been an inaccessible place, somewhere pretty remote.”

They chose commercial woods just north of Oslo, which can be visited, however, the family home which features in the movie was purpose-built on a lake.

Every Bond movie has not only a villain but a fantastical lair where they come up with their evil schemes.

In No Time to Die, that lair isn’t just a house or compound, though: it is an entire island.

To film it, the team went to the Faroe Islands, which is an archipelago off the coast of Denmark.

Location manager Charlie Hayes said they filmed background shots and stitched them together, before enhancing them with CGI to create the lair for Safin (Rami Malek).

Sadly, this means while the islands themselves are open for visitors, the lair itself is not there for fans to enjoy.

Hayes added: “The geography is absolutely spectacular. It has an enormous visual benefit for us in the film, although it was a difficult place to take a film crew.”

Mountain rescue had to be available while shooting, and an extremely limited number of crew were allowed on-set to make these shots happen.

No 007 movie would be complete without London, and it no doubt plays a vital role in No Time to Die.

This time, there are no big action set-pieces in London, and fans instead see a different relationship between Bond and his hometown.

Hayes said: “Bond is almost dragged back to London after his retirement. So I think this is the first time we see Bond almost at odds with London.”

He added: “He’s not quite as comfortable and secure as he’s been before. We see him open his old lock up and dust off his old things. He goes back to his old place of work where he’s given pretty short shrift.

“He doesn’t have the access to all areas that he once had. London has a unique role to play in this film.”

Some of the specific landmarks featured include Hammersmith Bridge, where Bond and M (Ralph Fiennes) meet, as well as the Ministry of Defence building in Whitehall.

Madeleine walks across the Mall, an iconic street in London, as well as visiting Carlton House Terrace, where her office is.

Outside of London’s landmarks, there were also U.K. sites used to replicate other places, such as Salisbury Plain near Stonehenge, which was used to film an explosion sequence at Safin’s lair.

Other U.K. locations used in the film include the Ardverikie Estate in Scotland’s Cairngorms National Park, Windsor Great Park and Buttersteep Woods, which double as Norway forestry during a car chase.

Of course, Pinewood Studios in London is also an iconic spot for Bond, and many of the previous spy adventures have been filmed there.

Much of the Cuban interior shots were filmed there, as well as various others.

No Time to Die is released in movie theaters on Friday, October 8.