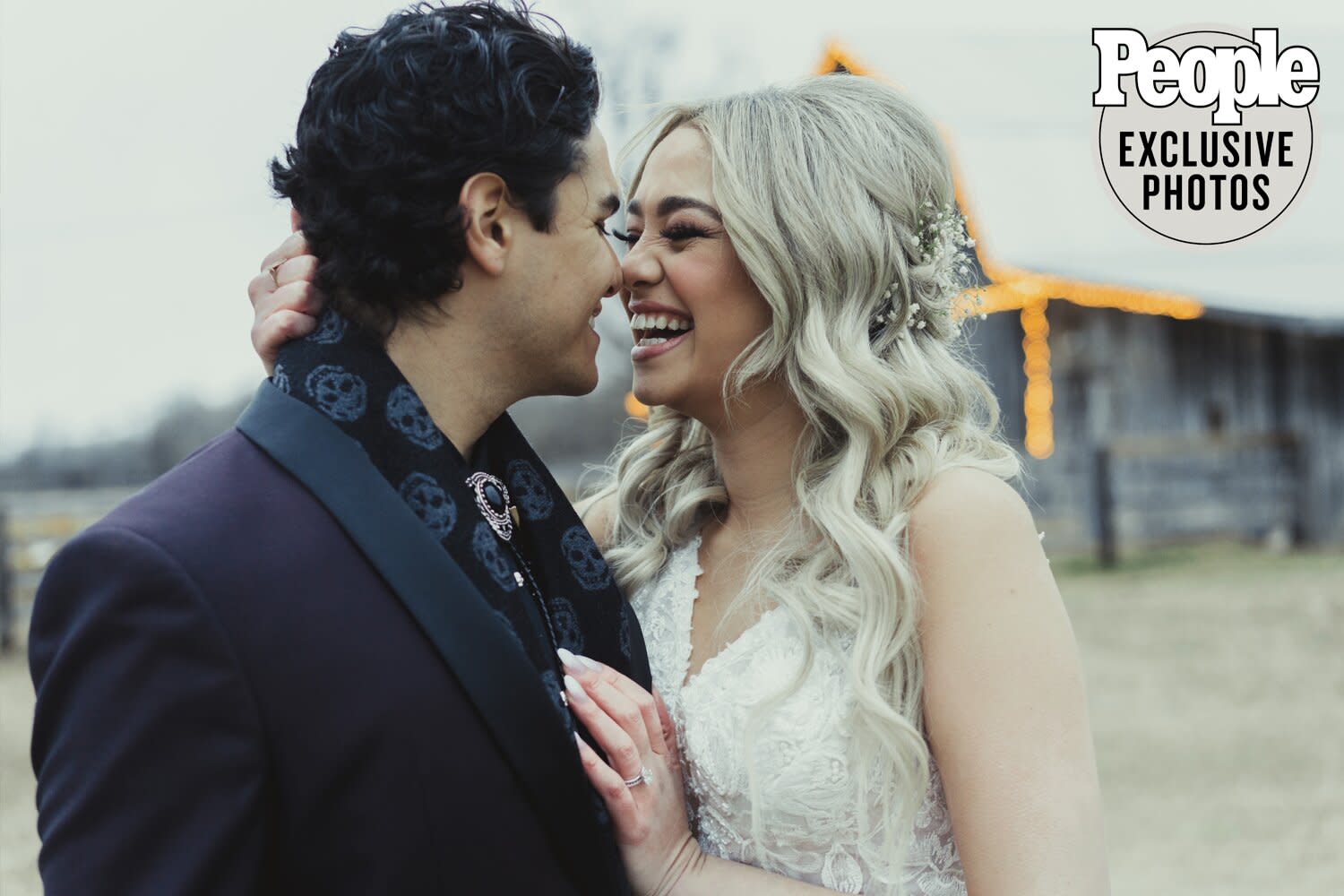 The contestants, who auditioned as a duo last season, tied the knot on Friday in an intimate wedding at Cactus Creek Barn in Dickson, Tennessee, PEOPLE can exclusively reveal.

For her big day, Luna, 21, wore a gorgeous white gown designed by Essense. The romantic dress featured a beaded lace bodice and a flowy skirt, with a faux fur shawl to match. “I tried on about seven dresses until I finally said yes to the dress,” she tells PEOPLE.

Meanwhile Garrido, also known by his stage name Alex Georgia, opted for a tuxedo from Jos. A. Bank, which he helped design with pal Zacharias Matthews, paired with boots from Dustin Bowen at Lucchese. As an extra special touch, underneath his cowboy hat, the groom, 27, carried some meaningful memento.

“Alex is going to carry on his tradition of keeping Polaroid photos of us tucked away in his Cowboy hat,” Luna says.

The safety of their guests during the coronavirus pandemic was also of the utmost importance to the couple, who recently released their debut single “How Many Times” in both English and Spanish.

“Everyone’s safety at our wedding is extremely important to us. We want everyone to have a great time celebrating this amazing day all while being safe,” Luna explains, noting that everyone in attendance “played a significant role in our lives both individually and together.”

In addition to having multiple hand sanitizing stations through the venue, the couple made sure that individually-wrapped masks and sanitizing wipes were made available to everyone. Additionally, all food was served to each socially distanced table individually.

Although the couple says they did “significantly” reduce their guest list, keeping their nuptials small was always part of the plan.

“COVID didn’t really change our plans that much,” says Luna. “We already had an intimate wedding idea with a reduced guest list and an outdoor barn venue.”

“We chose Cactus Creek Barn because we both have always dreamed of having a barn wedding. Most couples that come from Miami usually go for a beach wedding, but we have always had a different idea of how we wanted our dream wedding to look,” she adds. “We really wanted an atmosphere that made everyone feel like they’re at an intimate celebration in our own home.”

“The rings have been designed down to the smallest, most thoughtful details,” the couple, who got engaged in October, tells PEOPLE. “We want to thank Tiffany & Co for hand engraving Alex’s ring with the initials K & A. They even incorporated the lightning bolt we use in our logo that has a sentimental meaning to us.”

“We also want to thank Milano Jewelers in Pembroke Pines, Florida for creating a custom wedding band for Kat’s that pairs perfectly with the custom engagement ring they also created,” they add.

The couple also called on Garrido’s godfather and uncle, Pastor Frank Lopez, to officiate the ceremony and chose to forgo writing vows ahead of time, instead “saying whatever comes from the heart in the moment.”

“We’ve been talking about this day since shortly after we met,” Luna tells PEOPLE.

And the good times kept going during the reception!

For their first dance, the bride and groom chose “I Don’t Dance” by Lee Brice and their loved ones dined on a menu filled with “southern comfort food” as well as sweets and s’mores from S’more Love bakery.

Soon after, Garrido surprised Luna with a song he wrote especially for her. Joined by his friend Zach Martin for the performance, there wasn’t a dry eye in the house!

Making sure their guests could safely enjoy themselves — and cut a rug — during the festivities was also important to the couple.

“We each come from Latino families and dancing is a huge part of our culture,” Luna tells PEOPLE. “We are still working out all the details and figuring out the best way to ensure any of our guests who want to dance can do so safely … If anyone can figure out the best way to dance, it is definitely going to be our families!”

Following their wedding the couple will head off on a honeymoon — destination unknown.

“Kat actually has no idea where we will be going,” Garrido tells PEOPLE. “I’m surprising her with a honeymoon trip!”