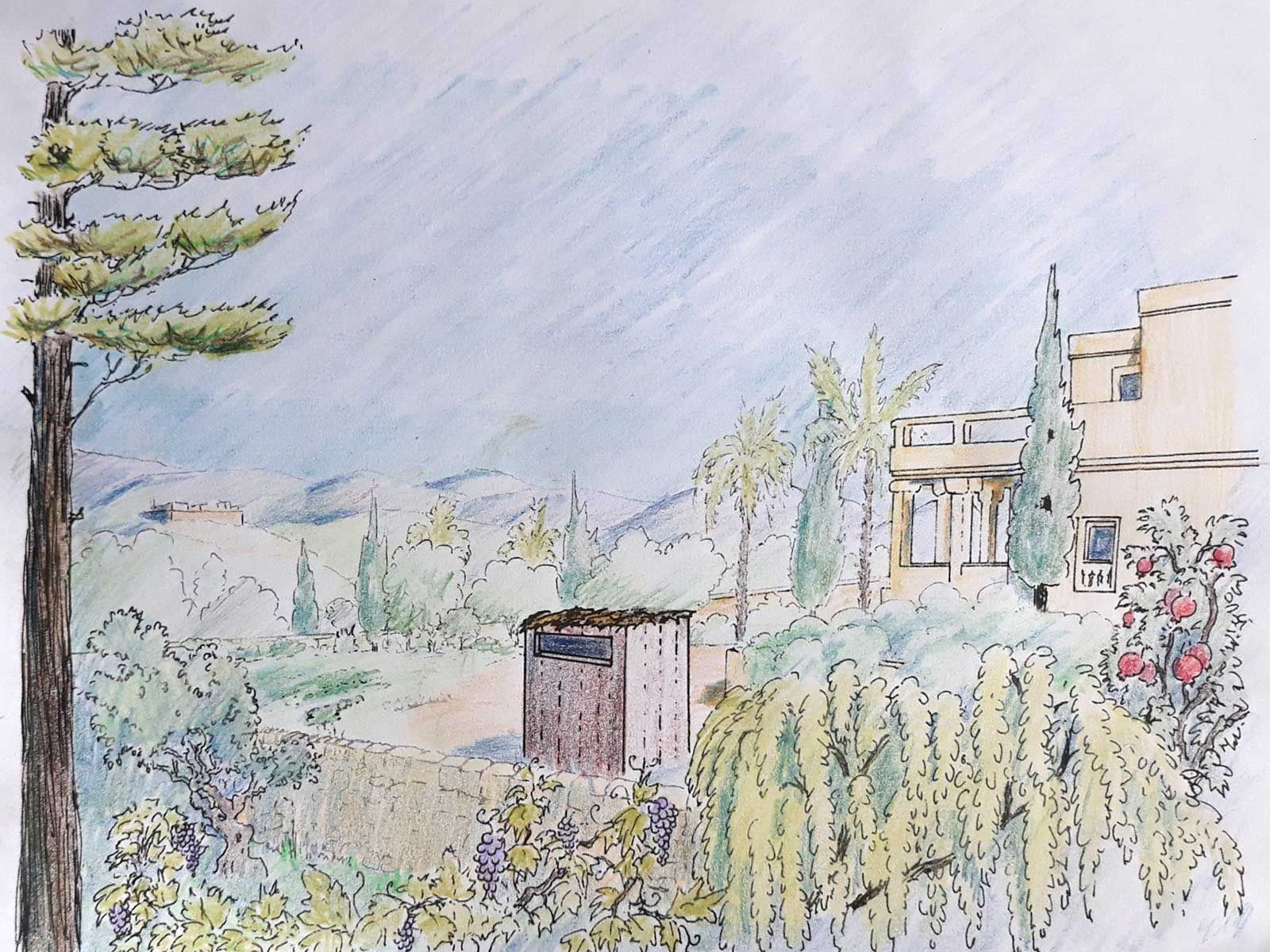 About two years ago, while building a new visitor center in Armon Hanatziv Promenade, an outlook in Jerusalem known for its beautiful vistas, construction workers dug up remains of a fine ancient structure. After examining fragments of exquisite balustrades and elegant window frames, archaeologists from the Israel Antiquities Authority determined that they once belonged to a palace or a luxury villa built in the mid-7th century B.C.E. â€œThe fragments were of the finest quality ever found in Israel,â€ says Yaâ€™akov Billig, who leads the excavation efforts at the Antiquities Authority. But as they dug further, the team was in for an even greater treatâ€”a prehistoric latrine. And even more excitingly, the researchersâ€™ newfound archaeological gem held what the ancient toilet-goers left behind: mineralized poop.

The Iron Age toilets are indeed a rare find, in part because few families had themâ€”most individuals did their business in the bushâ€”and in part because these usually simple structures did not survive very long. But those that stood the test of time are a trove of information about our ancestors, including their diets, health problems and potentially even their medicinal substances, says microarchaeologist Dafna Langgut of Tel Aviv University. She studies microscopic remnants the naked eye canâ€™t see. After peering into the prehistoric poop for cues about the individuals who produced it, she came up with a curious conclusion: While the palace residents lived in a luxury villa surrounded by a lush garden, they suffered from debilitating parasitic infections that gave them stomach aches, nausea, diarrhea and other ills. Langgutâ€™s team described their findings in the International Journal of Paleopathology, along with a theory of why these infections may have been so widespread that everyone was affected.

The waste left behind can often tell unique stories that you wonâ€™t find in ancient texts, says archaeologist Yonatan Adler, of Ariel University. â€œPoking through peopleâ€™s garbage is a great way to learn about them,â€ he says. While not involved in this study, Adler has spent his share of time digging through centuries-old rubbish, including animal bones from dinners eaten eons ago. If you look into individualâ€™s trash bags, today you can tell what they eat, what cleaning or cosmetic products they buy and what medicines they used. Likewise, primordial poop can tell can also tell scientists a lot about the individuals who produced it, which is why archaeologists were so excited about their discovery.

â€œOnce I saw the toilet seat, I knew exactly what it was,â€ says Billig. It was a sure sign that the palace residents were very wealthy. â€œThe Talmud describes a rich person as someone who has a toilet close to his table,â€ Billig says, because if one suddenly has to go, â€œthereâ€™s no panic, one doesnâ€™t have to hurry much.â€ The sediment accumulated below the stone seat was another tale-telling toilet signâ€”it was of a slightly lighter color than the surrounding soils, indicating that the content was different from your typical garden dirt.

When Langgutâ€™s team collected the samples from the pit and reviewed them under the microscope, they found some remains of parasitic worms and loads of their eggs, which meant that they were thriving and procreating in the palace occupantsâ€™ intestines. Altogether, she found four different types of parasitic worm eggs: Ascaris lumbricoides (roundworm), which can produce cramps and vomiting; Trichuris trichiura (whipworm), which can make bowel movements painful, Taenia (beef and pork tapeworm), which can trigger pain and weight loss, and Enterobius vermicularis (pinworm), which causes anal itching. The palace residents certainly had many miserable moments when it came to their daily intestinal functions. Worse, in children, these infections can lead to malnutrition and stunted growth.

To make sure the parasites indeed came from residentsâ€™ stools and not from the surrounding soil, Langgutâ€™s team sampled the areas around the pit. They found no worm eggs in the soil, confirming that they came from the suffering humans. Their excrement, which was naturally full of minerals like phosphates, served as a good preservative, so the eggs didnâ€™t fall apart but lasted for centuries.

The findings surprised Langgut. Parasitic infections werenâ€™t uncommon throughout human history, but typically they plagued the poor, and not so much the rich. The lower classes had poor hygiene, lived in close proximity to animals who carry many parasites, and could also acquire them from eating undercooked meat. With families living in crowded conditions and without adequate hand-washing, the parasites easily passed between individuals and from feces to drinking water. But that should not have been the case with the elite. â€œI was very surprised to see hundreds of eggs of parasites,â€ says Langgut, â€œbecause they came from the intestines of these high-status people that used to live here.â€ That meant that the parasites became endemic to the population, to the point that they made their way into the intestines of the rich.

Langgut has a theory of how this might have happened. Around 701 B.C.E., the Assyrian King Sennacherib laid a siege on Jerusalem, and while his army ultimately failed to take the city, they subjugated many surrounding settlements. They imposed a heavy tax on the residents in a form of the highly coveted agricultural products the area was known for, including wine and olive oil. Forced to pay the tax and grow more grapes and olive trees, the peasants had to farm the rocky, barren terrains surrounding the city. To make the soil more fertile, they began to enrich the lands with their own feces.

Human waste can indeed be a potent fertilizer, but to be used safely it must be composted for months, which helps eliminate parasites. Whether the residents didnâ€™t have the luxury of waiting that long or simply didnâ€™t know the nuances isnâ€™t clear. But Langgut thinks parasite eggs from the human fertilizer spread on plants and produce, eventually allowing diseases to become endemicâ€”and even affect the elite who had their own privies.

Langgutâ€™s team also discovered pollen inside the sediment, concluding that the toilet was likely surrounded by a lush garden of fruit and ornamental plants. Billig adds that the team also found remains of bowls, dishes and animal bones inside the pit, revealing that the ancients â€œflushedâ€ unwanted items down the drain much like we do. And some of these items may have been used to deal with the smells. â€œSome of the bowls couldâ€™ve been used as air fresheners,â€ Billig theorizes, adding that his team plans to do residue analyses to determine what the vessels once held. â€œIf we find something like fragrant oil or deodorant, it can teach us something new.â€

Adler underscores how material evidence, no matter how minuscule, can help us investigate the past. He says our window into studying the past is often very small, like cracks in a big opaque wall. â€œIn this particular study we have a very narrow window of parasites that have been preserved,â€ he says. â€œTo Dafnaâ€™s credit, she realized how lucky we are to have this information,â€ he addsâ€”and used it to study the societyâ€™s health challenges.

Exactly how individuals dealt with these debilitating diseases remains to be researched. Modern medicine treats parasitic infections with antibiotics, which werenâ€™t available at the time. But Langgut posits the residents may have had some remedies, and plans to scour the 2700 stool samples for clues. â€œIn another cesspit from a later time, I had found evidence of chamomile and mint, which we use even today for stomach ailments,â€ she says. â€œSo we will study the botanical remains and maybe see some evidence of medicinal plants.â€