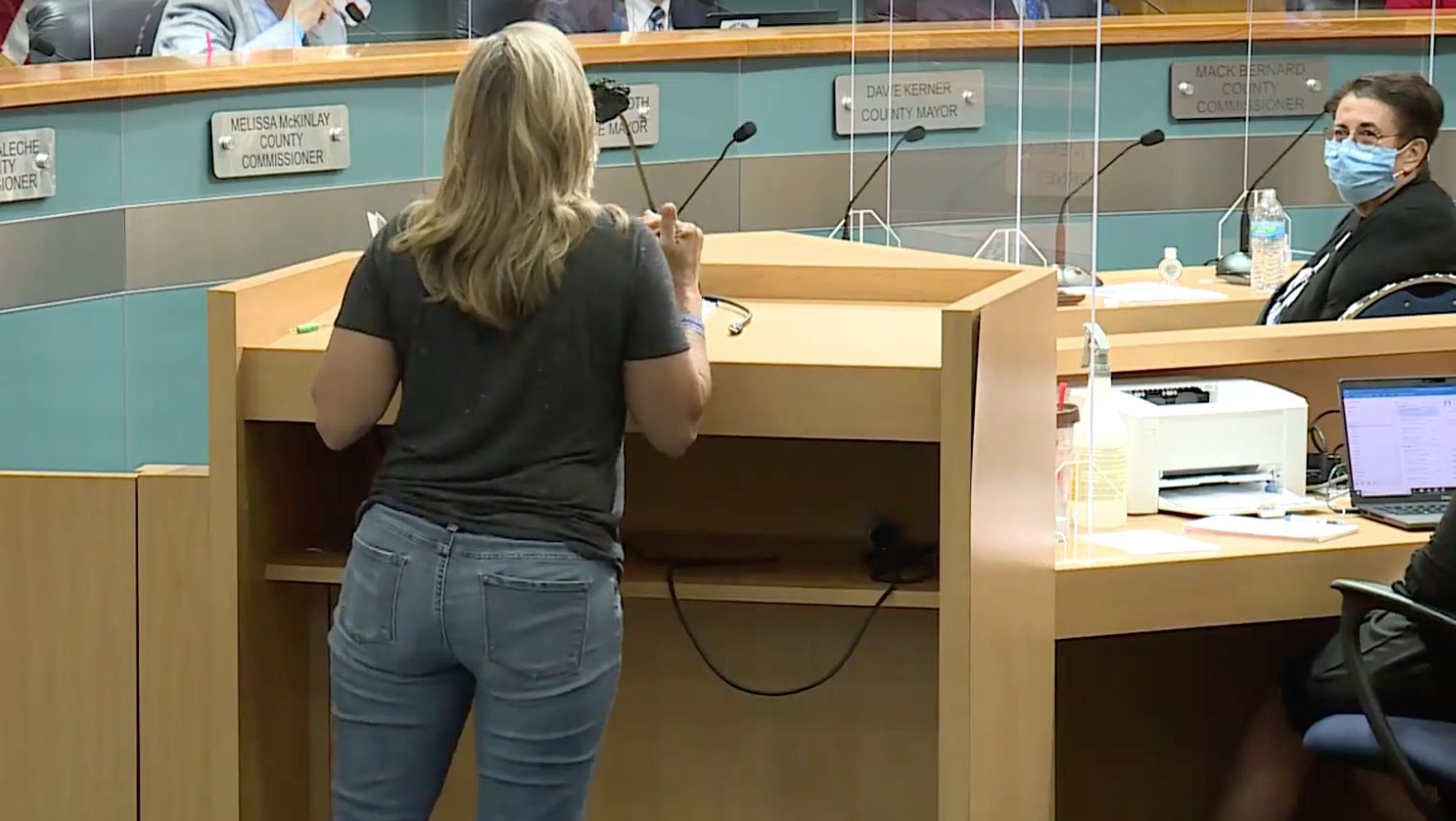 As Palm Beach County, Florida, battles an alarming spike in coronavirus cases, some speakers at a heated public hearing attacked county commissioners as â€œcommunist dictatorsâ€ who follow â€œthe devilâ€™s lawsâ€ as they prepared to vote on a mandate for wearing face masks in public.

During public comments before the unanimous vote in favor of the mask requirement on Tuesday, a majority of speakers opposed the move, according to local news station WPTV.Â Some of these speakers, asÂ The Daily Beast reports, denied that masks were effective against spreading COVID-19 and accused officials of playing God, violating the Constitution and threatening freedom and lives by imposing the measure.

One speaker threatened to perform a citizenâ€™s arrests on the officials for going â€œagainst the freedom of choice.â€

The woman touched on several other theories, including a suggestion that the public officials could be part of a â€œdeep stateâ€ of rogue officials.

This angry Florida woman argued today against the mask mandate, while bringing up the devil, 5G, Bill Gates, Hillary Clinton, “the pedophiles” and the deep state.

Another woman told commissioners,Â â€œI want to know who is getting paid off and where is the mandate coming from.â€Â

â€œWell, guess what, the riots are spreading, too!â€ she continued. â€œAnd what the hell are we going to do about that? Weâ€™re going to arrest patriots for not wearing a mask? Thatâ€™s what you want?â€

COVID-19 cases in the county have surged since it entered the first phase of Floridaâ€™s reopening plan on May 11, Dr. Alina Alonso, director of the Florida Department of Health in Palm Beach County, said during her testimony at the hearing.Â

â€œOur numbers are going in the wrong direction,â€ she said. She reminded attendees that masks are intended to protect both themselves and others. People are entitled to their rights, she said, but these public health laws are intended for peopleâ€™s safety.

Vice Mayor Robert Weinroth, who strongly opposed a mask mandate previously, said the surge in cases had changed his mind.

â€œI hate the idea of talking about mandatory face coverings. It goes against my grain,â€ Weinroth said. â€œBut the numbers we saw this week were just out of this world.â€

Majority of people opposing a mask mandate are participating in public comment portion of meeting. Two ppl now holding a Trump flag, and others are waving their hands when they hear comments they like arguing against wearing a mask. @WPTV pic.twitter.com/mSgabB77FZ

One man, who identified himself as Butch Dias and â€œan American patriot,â€ said that he â€œwould dieâ€ for the Constitution, which he said commissioners were failing to uphold.Â

â€œYou probably already have your orders already taken care of. You donâ€™t really care. You could have at least faked it.Â You do not care about We the People. Itâ€™s pathetic. It breaks my heart, because I would die for that flag, I would die for this country and I would die for the Constitution,â€ he said.

A speaker who said she had a medical condition that prevented her from wearing a mask told the commissioners she didnâ€™t believe there was any evidence that masks prevent the spread of COVID-19.

â€œYouâ€™re not God,â€ she told the panel. â€œYouâ€™re removing our freedoms and stomping on our constitutional rights by these communist dictatorship ordersâ€¦ If you do vote to mandate masks in the workplace and public schools and stores, the death of many will be on your hands.â€

The hearing erupted into chaos after the vote; some in the audience screamed insults and threats at the commissioners.

From Thursday, masks will be required in public places in Palm Beach County.

You can watch a recording of the meeting below.