Anti-Racism Protesters Around The World Demand Justice For George Floyd 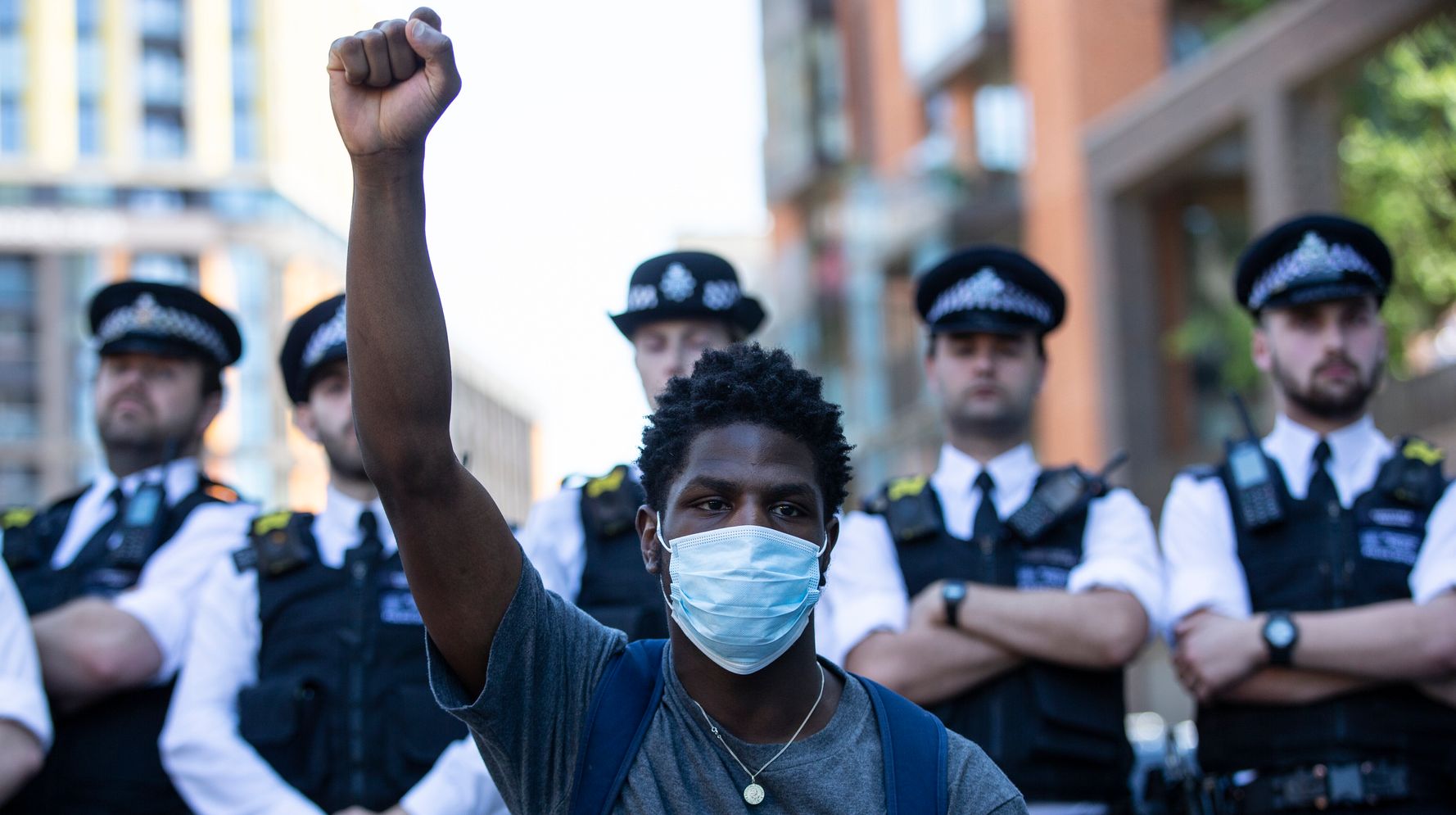 LONDON â€” Thousands of anti-racism campaigners around the world staged demonstrations on Sunday, acting in solidarity with Americans protesting police violence after George Floyd, a Black man, died after a white police officer kneeled on his neck for nearly nine minutes last week.

Demonstrators in London marched across the city after gathering in Trafalgar Square, where they kneeled en masse in honor of Floyd, before heading across the River Thames to protest near the U.S. embassy in the Battersea neighborhood.

Onlookers cheered and drivers honked horns from passing cars as the protesters chanted â€œsay his nameâ€ and â€œBlack lives matter.â€ At one point, four men climbed on top of a bus stop to lead the chants, before getting down on one knee in silence and encouraging the others to do the same.

One demonstrator said the protests were â€œvery important because it is sending a clear message that we have had enough racial injustice in our country.â€

Isabelle Orsini, 20, is originally from New York and now lives in the Kensington area of London. She told the Press Association news agency: â€œThe U.S. obviously has a much deeper and darker history of black discrimination compared to the U.K. The reason people are so angry is because this is reopening wounds that go back hundreds of years. It is very important that we do whatever it takes to tell our government that racism will not be tolerated.â€

Protesters also marched to Grenfell Tower in the northwest of the city, where a blaze in the high-rise apartment building killed 72 residents in 2017, most of whom were non-white.

Hundreds of people gathered for a similar demonstration in Manchester, in the north of England, and chanted â€œBlack lives matter.â€Â

Hundreds have taken to the streets in Manchester to protest over the death of George Floyd in Minneapolis pic.twitter.com/vmBmXbHHz9

Floydâ€™s death has also captured attention in Germany. On Sunday, the countryâ€™s top-selling Bild newspaper carried the headline â€œThis killer-cop set America ablazeâ€ and said that demonstrations in the U.S. looked like â€œscenes like out of a civil war.â€

Sports stars across Europe also joined the protests. Soccer player Jadon Sancho, who plays for Borussia Dortmund in Germany, as well as Englandâ€™s national team, revealed a â€œJustice for George Floydâ€ T-shirt after scoring his first goal since Germanyâ€™s top soccer league, the Bundesliga, started up again after being halted due to coronavirus concerns. The south London-born player received a yellow card for taking his jersey off on the field.Â

â€œAnti-Black racism, racism is real. Itâ€™s in the United States, but itâ€™s also in Canada. And we know people are facing systemic discrimination, unconscious bias, and anti-Black racism every single day,â€ Trudeau said in a statement on Friday.Â

â€œI call on all Canadians, whether itâ€™s anti-Black racism or anti-Asian racism or racism discrimination of any type, to stand together in solidarity,â€ he continued, â€œto be there for each other and know just how deeply people are being affected by what we see on the news these past few days.â€

British Foreign Secretary Dominic Raab, a Conservative, avoided responding to President Donald Trumpâ€™s incendiary reaction to the demonstrations that started in Minneapolis. Raab told the BBCâ€™s Andrew Marr Show that he has â€œlong kept to the self-imposed guidance not to comment on what President Trump says or indeed other world leaders, it is not really what my job is.â€Â

In Denmark, around 2,000 people gathered peacefully to protest outside the U.S. embassy in Copenhagen on Saturday. The Local reports the crowd then marched toward Christiansborg Palace, holding up signs emblazoned with â€œJustice for George Floyd.â€Â

Italy remains in a partial lockdown but protesters gathered outside the U.S. consulate in Milan on Thursday holding signs reading â€œI canâ€™t breatheâ€ and â€œstop killing black people.â€ Local media reportedÂ that the protesters simulated suffocation by gripping their hands around their necks.Â

In Mexico, people left flowers at a display commemorating Floyd on a security barrier outside the U.S. Embassy in Mexico City on Saturday. In a similar scene, people lit candles in front of the U.S. consulate in Krakow, Poland, on Sunday.