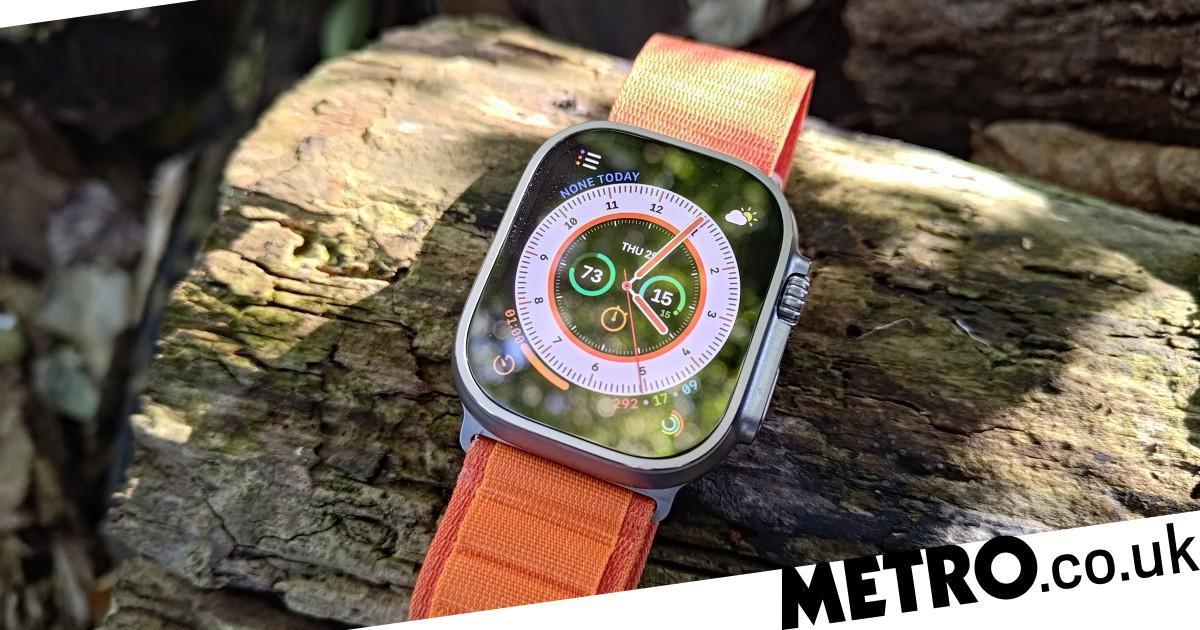 The Apple Watch Ultra is the most exciting thing to happen to Apple’s smartwatch for years.

Since the device first launched, back in 2015 it seems to have oscillated between fashion and fitness.

Not with this one.

We’ve had innovations and interations in the years since but the Ultra is the first time the tech giant has really mixed up the formula.

There’s improved GPS, titanium casing with a glove-friendly crown, improved brightness and an extra ‘action’ button for launching into workouts (or other features) faster.

The battery life has also been improved – but we’ll get to that later.

For the vast majority of people, the Apple Watch Series 8 will more than satisfy all their needs. The Ultra is designed for those who like to spend their spare time grinding through a Tough Mudder or SCUBA diving out in some far-flung speck of ocean.

I did neither of those things during my time with the loan unit Apple provided, but I still came away enchanted with the big, bulky thing strapped to my wrist.

Let’s get the numbers out of the way first. The Apple Watch Ultra offers up a 49mm 410×502 LTPO OLED sapphire glass screen. Brightness goes up to 2,000nits and there’s an IP6X dust resistance rating as well as a 100m water resistance one.

Perhaps the most important number of all is the price. Apple only offers a single cellular model for £849. Which is another reason many people may prefer the £419 Apple Watch Series 8.

Of course, price is relative. If you opt for the larger-sized Series 8 with cellular thrown in and a stainless steel case you’re looking at £829 – almost the same price as the Ultra.

Obviously, if you can get past the price and you’re a big fan of outdoor pursuits then this is de facto the best Apple Watch you can buy.

First up, the Ultra has dual band GPS connectivity – both L1 and L5 – which should mean it both locks on quicker and provides a more accurate location track for your workouts. Especially if you’re venturing into areas with poor signal – such as under a tree canopy or between very tall buildings.

Starting a workout is also easier, because of the additional button. Clad in ‘international orange’ the action button can be mapped to other features of the watch, like the torch or compass, but I used it to start workouts quickly without having to do too much swiping.

Right next to the action button is a new speaker grille that, if needed, can fire out an 86-decibel distress siren that can be heard from up to 600 feet (180 metres) away. And Apple says the Ultra is designed to function at temperatures as low as –20° C and as high as 55° C.

Once you’re out on the trail, you can use two new software features that come with WatchOS 9 (so they’re also available on the Series 8) to keep tabs on your location. Utilising the compass app, you can place Compass Waypoints by tapping the relevant button. This lets you mark locations and gives you a choice of at-a-glance symbols to use for whatever you’re marking. Such as Car, Tent or Ranger Station. Secondly, a new feature called Backtrack lets you leave a trail of digital breadcrumbs to help you find your way home again.

Even if you’re not going to go that in-depth with your hike/run/cycle, the hardware improvements really do shine through. The added brightness and larger screen mean you can see more metrics while outside in the sunshine and the flatter, raised display is easier to interact with than the curving one on the Series 8 or Series 7.

The font size is adjustable, if you need to change it – and I found it great to have six lines of workout stats on the screen while running. After a few runs, you’ll get the knack of glancing down at the display and finding the metric you want without too much trouble.

There’s also a multisport mode to automatically switch between workout types, which is handy if you want to get into triathlons.

Aside from the screen, interacting with the watch’s physical controls is easier as well. The digital crown and main button are now housed in a raised bar that gives it additional protection and stops accidental presses. There are deeper grooves on the crown and the side button stands slightly proud from the edge of the watch. This makes them both easier to use either when you’re wearing gloves or dripping in sweat.

But perhaps one of the best and most attractive features of the Apple Watch Ultra is the boosted battery life.

Apple states wearers will get up to 36 hours of normal use, down to 18 hours if the LTE connectivity is running the entire time. As soon as you throw in the low-power mode, which disables all non-essential features (like the always-on screen) that 36 hours jumps up to 60 hours.

In my testing, the Ultra performed just as well as Apple claims. It’s not quite as good as you’ll find on some of the rivals from Garmin – or Fitbit’s lesser-specced watches – but for Apple fans this is a massive step in the right direction.

Finally, a big part of any Apple Watch is the strap. There are three new straps that Apple has launched with the Ultra although, crucially, any Apple Watch strap for a 44mm or 45mm model will also fit.

Choosing the right size strap should absoloutely be something any potential buyer should be set on. For part of my testing, I was using the orange Alpine Loop strap (which looks fantastic) in the largest size. It was too large. Even on the tightest hook, it shifted around a bit on my wrist during exercise when ideally it should be snug. As soon as I shifed to a medium sized band, the watch felt much more secure and comfortable.

If you’re used to wearing a regular Apple Watch then the Ultra is a big step up in terms of bulkiness. But I found that after a few days, I’d adjusted to the added size on my wrist and it became the, ahem, new normal.

The only caveats I found to this increased size are that it’s not as comfortable to wear in bed for sleep tracking as the standard Apple Watch. And also; you may struggle to get this under a shirt cuff if you’re male and dressing for a formal event.

When all said and done, should you part with your hard-earned cash in exchange fo the Apple Watch Ultra?

If you’re a regular-type guy or gal that likes to exercise a bit but isn’t conquering mountains in your spare time then the Ultra really is overkill. You’ll get 80% of the same experience from the still-really-great Apple Watch Series 8.

But, if you’re in one of two subsets consisting of either a) you like to take part in Ironman triathlons for fun or b) you have to have the best, most expensive Apple product in each category – well, then you should definietly march down to the nearest Apple Store and pick one of these up.

There’s so much to like about the Ultra: the titanium casing, bigger and brighter screen, boosted battery life and extra water resistance. It’s the most exciting thing that’s happened to the Apple Watch for a while and a big showcase for where Apple can go with its health and fitness efforts.

Where can I buy one? The Apple Watch Ultra is for sale through Apple’s online store right here.