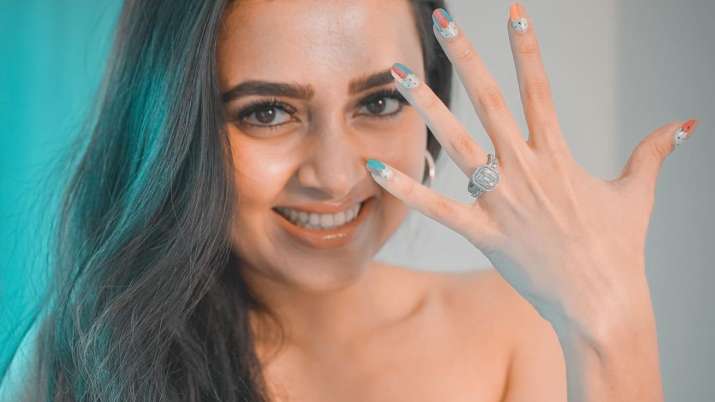 Tejasswi Prakash has been on the move ever since she took the trophy home from the popular show Bigg Boss 15. The actress won the hearts of people all across the country, owing to her candour and her romantic relationship with Karan Kundrra. After the show, Tejasswi and Karan became one of the most beloved Telly Town couples. Fans started referring to them as ‘Tejran’. Ever since the pair came out of the show, they have been head over heels in love and painting the town red. The couple has never been shy about expressing their love openly and are spotted together in the city quite frequently. Recently, Tejasswi dropped a post in which she is seen flaunting a diamond ring that took the internet by storm.

On Friday, Tejasswi took to her Instagram handle and shared a post hinting at her engagement. The Naagin actress is seen flashing a diamond ring while holding a bouquet in her other hand. As she shows the magnificent stone, she can be seen radiating glow.  The following image shows a zoomed view of the large solitaire. Further keeping fans on the edge of their seats and raising the excitement, she wrote, “Big Day! It’s a YESS when the ring is so dreamy.”

The picture stirred the internet and fans flocked to the comment section to express their excitement and congratulate the actress. One user commented, “tejuuu ‘are you serioussss”. Another user commented, “I had mini heart attack”. A third user commented, “Can’t wait for the Dday”.

While all this was going on, the main man, Karan Kundrra, finally came to the comment section and smashed the fiasco, commenting, “Babe you broke my whatsapp. it’s an #Ad nincompoops”.

As Karan Kundrra commented, fans replied to him, saying, “even if its untrue, make this happen”.

Earlier, the lovebirds became viral in the blink of an eye with their lovely PDA moment. The two actors shared a kiss as they took two different elevators in the video.

Kaun Banega Crorepati 14: Amitabh Bachchan has fear of snakes, recalls incident from one of his films

Best Romantic- Comedy Movies to Watch This Weekend: About Time, Love Actually and others