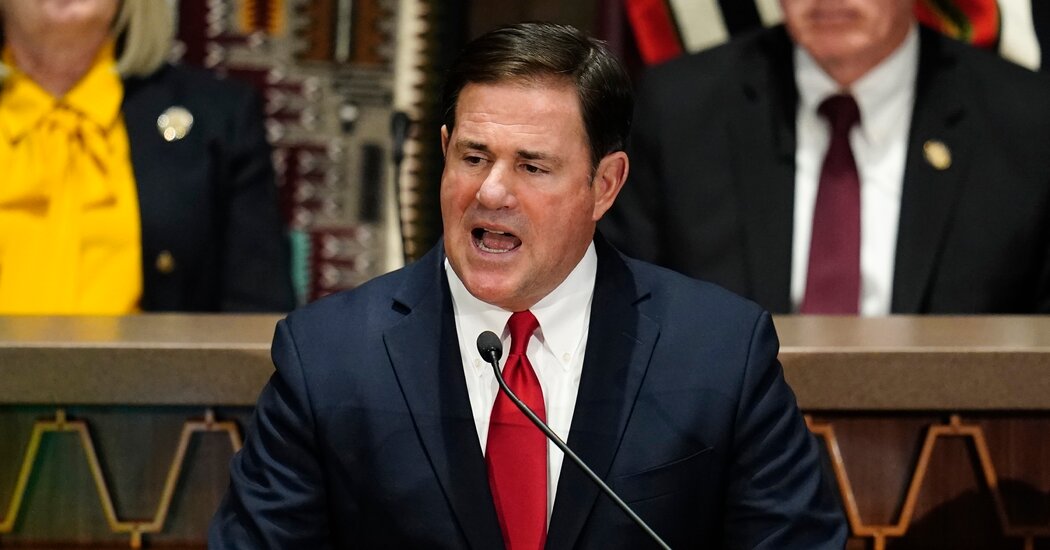 WASHINGTON â€” Gov. Doug Ducey of Arizona sued the Biden administration on Friday to block its efforts to claw back pandemic relief money that the state has been using to undercut mask requirements in schools.

The lawsuit is the latest legal fight between a Republican-led state and the Biden administration over how the $350 billion in state and local pandemic aid that Congress allocated last year can be used. It follows a series of warnings from the Treasury Department that Arizona could lose some of the $4.2 billion that it was awarded in the rescue package.

The funds in question relate to two education programs that Mr. Ducey, a Republican, established last year in response to mask requirements that some school districts in the state enacted. The state tried unsuccessfully to enact a law banning school mask mandates last year, but Mr. Ducey continues to oppose rules that require them.

The state has used federal money to help schools and students get around the mandates. A $163 million program, funded by federal relief money, provides up to $1,800 per pupil to public and charter schools but excludes schools that require masks.

A separate $10 million program funds vouchers worth up to $7,000 to help poor families leave districts that require face coverings or impose other Covid-related â€œconstraints.â€

The Treasury Department has insisted that these programs violate the intent of the 2021 $1.9 trillion stimulus law, which was aimed at mitigating the coronavirus by giving states funds to maintain public services and support businesses and households harmed by the health crisis.

The Treasury Department first issued a warning to Mr. Ducey in October, signaling that the funds being used for those programs could be recouped if Arizona did not halt or alter them. The federal government said that Arizonaâ€™s programs undermined evidence-based efforts to stop the spread of Covid-19 and that federal funds could not be used for those purposes.

In a second warning last week, the Treasury Department said that if Arizona did not cease or change the programs within 60 days, the federal government could start a process to recoup the money that it alleged was being misused. Treasury also said it could hold back the second installment of relief money that Arizona is scheduled to receive this year.

Mr. Ducey has rejected those arguments, and on Friday he said the state would fight back.

â€œThe Biden administration is attempting to hold congressionally appropriated funds hostage and is trying to bully Arizona into complying with this power-grabbing move,â€ Mr. Ducey said. â€œTheyâ€™re going after education programs that are designed to help kids access in-person instruction, ensure schools stay open and give parents the ability to make decisions that are best for their kids.â€

Arizonaâ€™s attorney general, Mark Brnovich, sent Treasury Secretary Janet L. Yellen a letter this week suggesting that the state was preparing to take its concerns to court amid what he believed was â€œblatant federal encroachment.â€

Congress approved the state and local relief funds in March as part of the American Rescue Plan. Republicans opposed the law, but across the country they have been using the money to fill state coffers and to try to enact conservative policies.

The law gave the Treasury Department broad discretion to make rules governing how the money is spent and ensure that it is not being misused.

The Treasury Department on Friday defended its decision to restrict the use of the relief funds.

â€œTreasury believes the rule is correct and allowed by the statute and Constitution,â€ Dayanara Ramirez, a Treasury spokeswoman, said in a statement.

Several Republican-led states have already sued the Biden administration over a provision in the law that says states cannot use relief funds to subsidize tax cuts, claiming that the restriction is a violation of state sovereignty.

Mr. Ducey made a similar argument on Friday about attempts to stop his education programs.

â€œUnconstitutional overreach by one branch of government over anotherâ€™s directive should not and cannot get in the way of that,â€ he said.