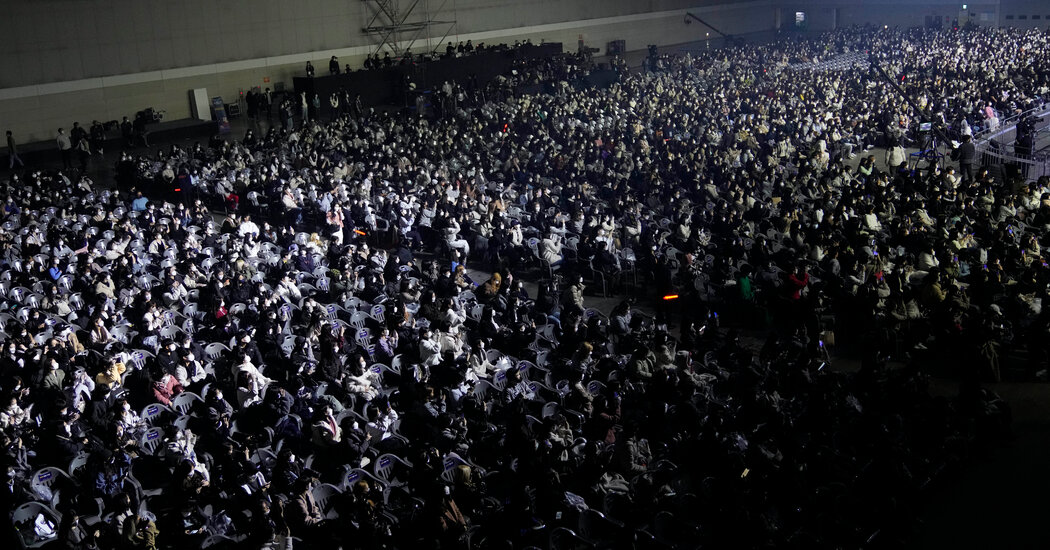 At the first BTS concert of the coronavirus era on Saturday, Maggie Larin, 25, and her three friends were surrounded by a roaring crowd of 70,000 other fans in SoFi Stadium in Inglewood, Calif.

But when Lee Hye Su, 23, and her two friends go to see the K-pop group The Boyz in Seoul Olympic Park next weekend, she will be seated silently, masked and socially distanced, alongside only 2,100 other fans, according to the venueâ€™s rules.

As K-pop bands start touring the world and performing for live audiences again, fans in their home country, South Korea, are flocking to stadiums. But they must abide by the governmentâ€™s strict rules: no shouting, chanting or singing along at concerts with 500 or more attendees.

â€œWeâ€™ll only be able to clap when we enter the hall,â€ said Ms. Lee, who has followed the band since 2018. She said it was unfortunate that the atmosphere on Saturday would be different from that of past concerts, where she could yell all she wanted.

â€œBut I knew I had to go as soon as I found out about it,â€ she said.

Live K-pop concerts are returning to South Korea as hospitalizations are rising across the country and the spread of a new variant alarms the world. The health minister, Kwon Deok-cheol, said on Friday that the government was considering tightening some restrictions because the number of available beds for critically ill patients in and around Seoul was â€œreaching a limit.â€

But there is pent-up demand for live performances. K-pop fan groups have remained active throughout the pandemic, said Kim Hong Ki, chief executive of Space Oddity, a South Korean music collective. Record sales for K-pop groups have even spiked, he said.

â€œIn K-pop, fans arenâ€™t ordinary consumers, but active, evangelistic and dedicated to their fandom, almost religiously,â€ said Mr. Kim, who has worked in the South Korean music industry for decades. â€œWhen the rules are relaxed to some extent, fans will be chasing after live shows.â€

Several other bands, like NCT 127 and Twice, have scheduled their first pandemic-era concerts in South Korea for next month. And thousands of K-pop fans in the country are dashing for tickets, even if they know those shows could get canceled.

Pandemic rules in the United States require fans to wear masks in concert halls, and provide proof of full vaccination, negative virus test results and photo identification upon entry. Still, the BTS concert in California this weekend was sold out months in advance.

To catch the show, Ms. Larin took a weekend away from law school in Michigan.

â€œIâ€™ve been spending a lot of time preparing for the actual concert, listening to a lot of their music and learning their fan chants,â€ she said before the event on Saturday. â€œItâ€™s going to be a very emotional experience.â€