As Russia demands legal guarantees from the West, is Georgia on anyoneâ€™s mind? 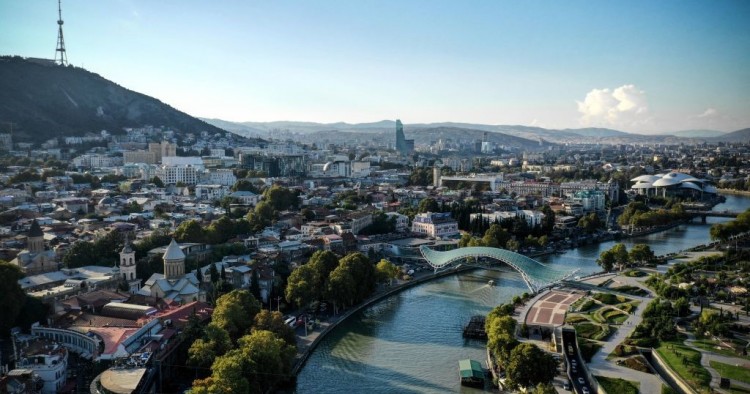 As Russia amasses more than 100,000 troops along Ukraineâ€™s borders, the Kremlin is holding the country at gunpoint while imposing outrageous demands on the West. On Dec. 17, 2021, Moscow issued two draft â€œtreatiesâ€ demanding legal guarantees for the reversal of NATOâ€™s open door policy, which is enshrined in the organizationâ€™s founding document. Russia furthermore aims to fundamentally change the European security order by requesting NATO deploy no forces or weapons in the countries that joined the alliance after May 1997 and withdraw those already there.

President Vladimir Putin warned the West about the possible consequences of not taking Russian ultimatums seriously by stating that Russia would use military-technical response measures and by threatening Ukraine with another invasion. In fact, the propaganda war is already underway. Russia tries to portray itself as being threatened by possible NATO enlargement. In reality, Russia shares land borders with 14 countries and only five of them are members of the alliance â€” meaning that just 6% of the country is â€œencircledâ€ by NATO. The invented narrative about Russiaâ€™s own security concerns seems like the ultimate example of cynicism. NATO has never attacked Russia, while Moscow has waged wars against Georgia and Ukraine and still occupies their lands and militarizes the Black Sea.

The real story is different. The prospect of being surrounded by democratic states has haunted Moscow since Georgia and Ukraine started to democratize and form closer ties with the West. The Kremlin viewed the â€œcolor revolutionsâ€ in Georgia (2003) and Ukraine (2004) as an indication that neither Tbilisi nor Kyiv saw their future as part of the Russian sphere of influence. The quest by Russiaâ€™s neighbors to Westernize was portrayed by Moscow as a Western method of war meant to undermine Russian influence.

These perceptions have largely shaped Russiaâ€™s relationship with Georgia and Ukraine and made anti-Westernism a core part of its disinformation playbook. Almost two decades later, Russia still tries to reverse the status quo. Interestingly, while the recent protests in Kazakhstan had nothing to do with the West, President Putin made a reference to the color revolutions, suggesting that â€œdestructive internal and external forcesâ€ were attempting to orchestrate a regime change. This once again shows the extent of the Kremlinâ€™s fear that post-Soviet states will slip away from the Russian orbit.

By blackmailing NATO allies, Moscow forced the West to take its ultimatums seriously and sit down with it at the negotiating table. Despite a lack of significant progress in the talks, this time the West seemed more united than in previous years. Western leaders disregarded Russian ultimatums and noted that NATOâ€™s door will remain open for countries that meet the membership requirements.

Russian dissatisfaction with the outcome of diplomatic talks was directly translated into major cyberattacks targeting Ukraineâ€™s government websites. In fact, Russia is using tried and tested tactics. In 2008, Moscow integrated cyber war and information operations against Georgia in support of its conventional operations for the first time in its history. Since then, the West has tried several resets, including a push to implement the Nord Stream 2 pipeline project in the naive hope that Russia would not pursue its aggression and use it as a geopolitical weapon. Yet, these attempts, in conjunction with the impunity over the August 2008 Russo-Georgian War, were perceived by Moscow as Western weakness.

Georgia off the radar?

While all eyes are on Ukraine, Georgia is also part of the Russian ultimatum. Moscow demands to reverse the decision of the Bucharest Summit of 2008, according to which Ukraine and Georgia will eventually become members of NATO. In recent years, the internal political dynamics in Georgia have been particularly tense due to greater political polarization and societal divisions. Consequently, some view Georgia as off the Russian radar for now. While Georgia is not currently threatened by an imminent invasion, Russia continues to undermine its territorial integrity and encourages long-term political chaos by providing support to local pro-Kremlin actors. At the same time, illegal â€œborderizationâ€ and militarization of the occupied territories in Georgia continue with constant violations of human rights.

Simultaneously, Russia is intensifying its efforts to drag Georgia into the â€œ3+3 format,â€ which entails a regional cooperation framework bringing Russia, Turkey, Iran, and the three South Caucasus states together. Despite Georgiaâ€™s formal refusal to participate, its flag was still displayed during the first meeting, held last month in Moscow. Recently, the Russian foreign minister, Sergey Lavrov, noted that Georgia should join the platform and asked Turkey, Azerbaijan, and Armenia to convince Tbilisi to participate. Under the guise of promoting regional cooperation, Moscow is trying to push Georgia into the Russian orbit by including it in a platform that directly contradicts Western interests in the region.

Additionally, the Russian foreign minister claims that Georgia is being â€œforcedâ€ into NATO against the will of its people, leaving an opening for Russia to â€œsaveâ€ the Georgian people from the â€œevilâ€ West. Yet opinion polls show the exact opposite. In todayâ€™s polarized environment, if there is a single cause that the majority of Georgians support, itâ€™s European and Euro-Atlantic integration.

Georgia must draw important conclusions from the current situation in Ukraine. Russiaâ€™s threats and blackmail demonstrate that the so-called frozen conflicts can quickly thaw. In the meantime, Tbilisi should invest in solving its internal political struggles and increase societal resilience while deepening cooperation with its allies.

Moscow is always looking for the hidden hand of the West in Ukraine and Georgia. The reality, however, is different. Having been traumatized by wars and constant Russian attempts to cause destabilization and chaos through the use of hybrid tools, Georgians and Ukrainians have a realistic view of the Russian threat. Therefore, it is hardly a surprise that the people of Georgia and Ukraine strive to be part of the Western democratic world. Russia lost the war for the hearts and minds of ordinary citizens a long time ago. The Kremlin can only offer corrupt institutions, violation of human rights, and authoritarian rule with no free media or elections. Georgians and Ukrainians fought hard to leave all that behind.

At this time of extraordinary tensions, the West needs to stay united and remember the mistakes made after the Russo-Georgian War of 2008. The EU and NATO can still convince Russia that their firm commitment to their allies will make the costs of military escalation too high and not worth the risk.

Natia SeskuriaÂ is an associate fellow at the Royal United Services Institute (RUSI) and was previously a fellow with MEI’s Frontier Europe Initiative. The views expressed in this piece are her own.