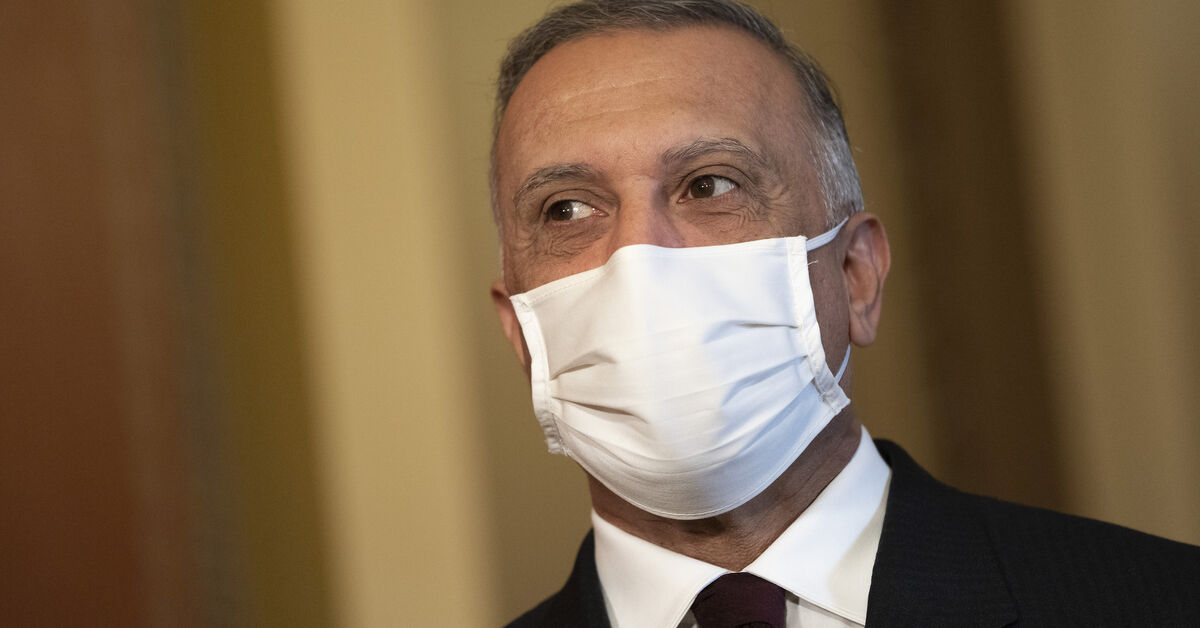 An attack on Iraqi Prime Minister Mustafa al-Kadhimi’s residence in the early morning hours of Sunday sparked a flurry of reactions and concerns about armed groups linked to Iran that had threatened him shortly before.

The prime minister said that he was not harmed in the attack, which was reportedly conducted by three explosives-laden drones of which only one was not shot down by security forces.

However, there were reports that he had suffered a slight injury to his left wrist. In one photo he appears to have a white bandage on his left arm.

In a video published online, Kadhimi called it a “cowardly aggression,” stressing that “missiles and drones do not build nations or build a future”.

The Iraqi military called it an assassination attempt, while some described it as an attempted “coup” given the entrenched military might of the Iran-linked groups.

Iraq’s Oct. 10 parliamentary elections had seen a political alliance linked to the Shiite-led Popular Mobilization Units (PMU) lose a substantial number of seats compared with those garnered in the 2018 elections, which were held only months after Iraq declared victory against the Islamic State in the country in December 2017.

Protestors supported by political parties linked to armed groups close to Iran — many of which received training and weapons from Iraq’s eastern neighbor for many years prior to the formation of the PMU in 2014 to fight IS — had been conducting sit-ins near Baghdad’s Green Zone for weeks, claiming election fraud.

In recent days these protests had turned violent. Two were reportedly killed and over a hundred injured between both protestors and security forces.

Iran-linked groups have brigades within the government-salaried PMU, formed in 2014 to fight IS. Many are seen as more beholden to Iran’s Islamic Revolutionary Guard Corps (IRGC) and the “muqawama” (“resistance”) led by Iraq’s eastern neighbor than to the Iraqi government. They have openly defied orders government orders multiple times and previously threatened Kadhimi.

The prime minister is also the head of the armed forces in the country.

After being sworn into office in May 2020 after several months of a government void following the resignation of the previous government in late 2019 due to massive protests across central and southern Iraq, Kadhimi had pledged to bring armed groups under state control.

Kadhimi has often referred to unnamed “outlaw groups” behind attacks on Baghdad’s heavily fortified Green Zone, where his home and that of many other politicians as well as government offices are located, as well as on Iraqi military bases hosting international forces and convoys carrying supplies for them. Arrests of members of groups usually held to be “untouchable” have occurred during his year and a half in office.

The most high-profile arrest was of PMU brigade commander Qassim Musleh in May, as this journalist — who had interviewed Musleh twice before in Karbala — reported from Baghdad.

Muslih was eventually released in June after massive pressure from Iran-linked armed groups. The judiciary at that time had claimed that “no evidence was presented” against him. The commander of the Quds Force of Iran’s IRGC, Ismail Ghaani, had arrived in Baghdad for talks of an unspecified nature later that day. In the evening, three rockets had hit Iraq’s Balad air base.

Shortly after Sunday’s attack on the prime minister’s residence, a prominent member of the Iran-linked armed group Kataib Hezbollah (KH) insinuated that Kadhimi had orchestrated the attack himself, claiming he was “playing the role of the victim” and that “no one in Iraq has even the [desire] to lose a drone over the house of a former prime minister.  And if there is someone who wants to harm” him, that “there are very many ways, less expensive and more secure, to achieve this.”

KH had in the Oct.10 elections fielded candidates for the first time as part of Harakat Huqooq but did poorly.

Both KH and AAQ have been designated by the United States as Foreign Terrorist Organizations but both also have brigades within the Iraqi government-salaried PMU.

Shiite cleric Muqtada al-Sadr, whose political alliance received the largest number of seats in the recent elections and is often referred to as a “nationalist”, said that the attack was “a clear and explicit targeting of Iraq and its people” aiming to push the country back to “a state of chaos in order to be controlled by non-state forces” and “interferences.”

Thus, he said, “our valiant army and the heroic security forces must take matters into their own hands.”

The divergence in political views of Sadr and more Iran-linked Shiite armed groups is well-known and Sadr has often called for all arms to be brought under state control.

Iraqi President Barham Salih stressed that Iraq cannot allow itself to “be dragged into chaos” and that the attack should be considered “a coup against its constitutional system.”

A statement from US State Department Spokesman Ned Price said: “This apparent act of terrorism, which we strongly condemn, was directed at the heart of the Iraqi state. We are in close touch with the Iraqi security forces charged with upholding Iraq’s sovereignty and independence and have offered our assistance as they investigate this attack.”

Egypt and many other nations also condemned the attack in official statements. Saudi Arabia said that it “stands united by the brotherly Iraq, government and people, in confronting all terrorists.”

The Iranian government condemned the attack as well.

Meanwhile, serious incidents involving sectarian bloodletting and displacement have beset Iraq’s eastern province of Diyala near the Iranian border in recent weeks, as this journalist reported.

Concerns that the country may be dragged back into chaos are uppermost in the minds of many Iraqis. Despite some improvement, non-state armed actors clearly continue to be able to conduct attacks at the highest level in the country.