Asteroid That Decimated the Dinosaurs Struck in Spring 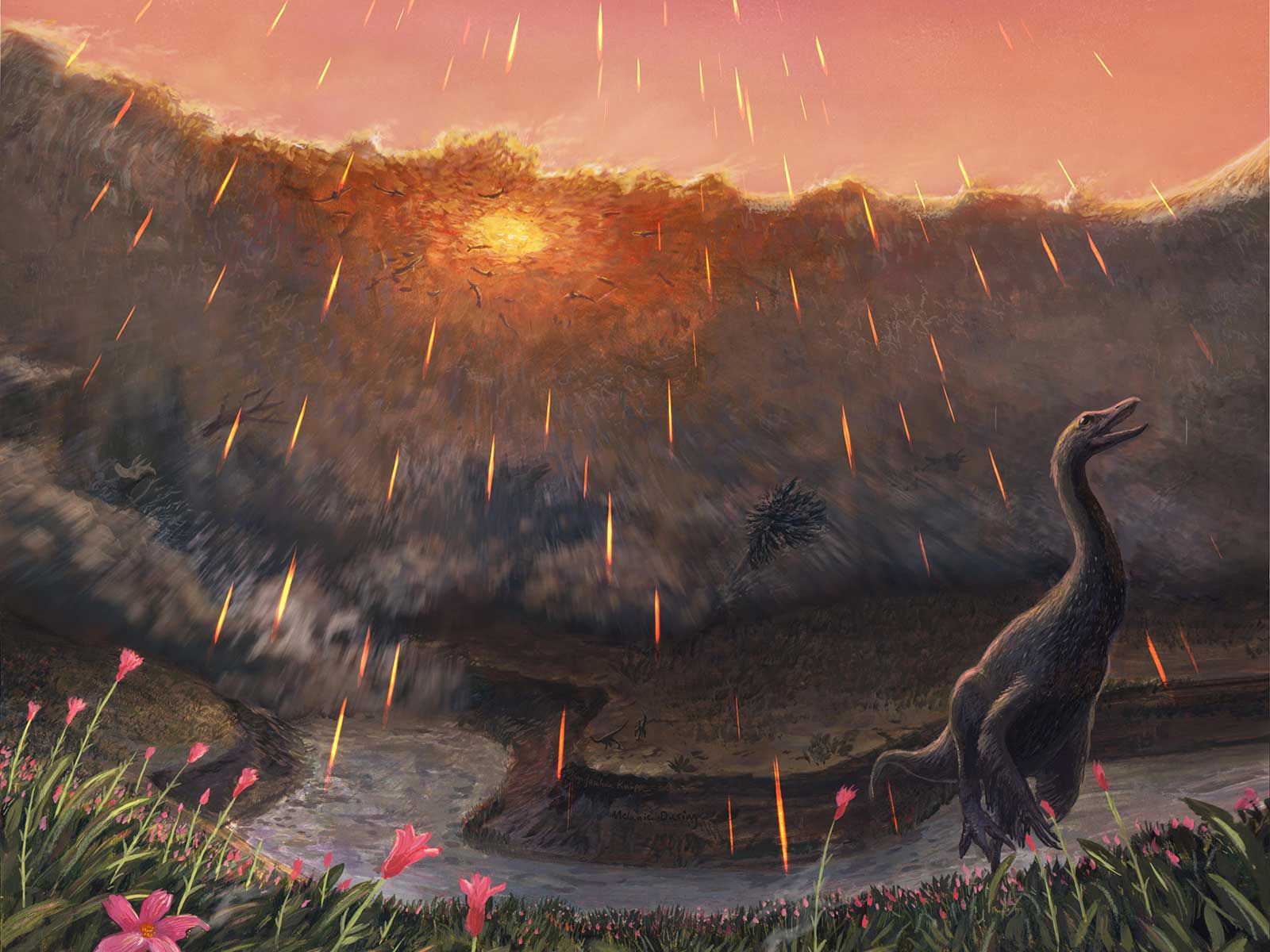 Spring is often a time of new growth, when life blooms. During the last days of the Cretaceous, 66 million years ago, the dinosaurs and varied inhabitants of the Hell Creek Formation ecosystem likely experienced the warming temperatures and lengthening days much like organisms today. The likes of Tyrannosaurus and Triceratops may have begun feeling the urge to nest, with magnolias and dogwoods preparing to flower. But it may have been at this moment that a roughly seven-mile-wide asteroid struck the planet, immediately triggering the mass extinction that would wipe out 76 percent of known species. That key piece of timing doesnâ€™t come from dinosaurs, but from the fish that swam in the waters Edmontosaurus and kin drank from.

In 2019, paleontologists and geologists published their first paper on a fossil site in North Dakota nicknamed â€œTanis.â€ This place, the researchers proposed, contains critical clues about the first minutes and hours of what transpired after impactâ€”including well-preserved fossil fish that contain asteroid impact debris in their gills. By studying the bones of these fish and comparing them to their modern counterparts, Vrije Universiteit Amsterdam paleontologist Melanie During and colleagues haveÂ come to the conclusion that the impact that ended the Age of Dinosaurs most likely occurred in the spring.

That conclusion, published today in Nature, has been years in the making. In 2017, During recalls, geologist Jan Smit gave a presentation at the institution where During was conducting graduate research. Part of Smitâ€™s presentation covered new, as-yet-unpublished finds at the Tanis site. The fossils found there were not only exceptionally preserved, down to their chainmail-like scales, but the site seemed to document the immediate aftermath of the asteroid impact. Fossils from this slice of time are exceptionally difficult to find, much less relatively complete ones. â€œI think I remember feeling actually feverish when he showed us the pictures and told us the story,â€ During says. The fish seemed to be perfect candidates for geochemical analysis that might reveal what transpired as the Cretaceous ended. After conferring with Smit and her advisor Jeroen van der Lubbe, During went out to Tanis to excavate fossil fish from the site.

During was after the secrets inside the bones of the paddlefish and sturgeons preserved at Tanis. Much like their modern counterparts, the ancient sturgeons and paddlefish of the Hell Creek Formation grew in cycles. DuringÂ used modern sturgeon and paddlefish to investigate the biology of their ancient relatives because of how similar modern fish are to the fossil forms found at the Tanis site. â€œI think we can assume that Cretaceous sturgeons and paddlefishes had a similar biology to the living forms because their anatomy is so similar and they inhabit similar environments,â€ says University of Alberta paleontologist Alison Murray, who was not involved in the new study.

During warmer months when food was plentiful, the ancient fish grew and added more bone tissue just as their modern relatives do. During cooler, harsher months, however, their growth slowed and left a lineâ€”called a line of arrested growth, or LAGâ€”in their bones. In addition, the bones of these fish contained signatures from oxygen and carbon isotopes. The geochemical signals in these isotopes were influenced by what the fish were eating and the waters they swam in, a natural phenomenon that has been used by paleontologists to study everything from when early whales took to the seas to what plants ancient herbivores ate.

The growth rate and carbon signatures could be brought together to help figure out how these fishes livedâ€”and what time of year they became extinct. â€œI think it makes sense to everyone that when a fish eats, its bone grows,â€ During says, â€œbut to see this quantified is a really new and unbelievably informative for future studies.â€

Consistent oxygen isotope values indicate that the paddlefish at the Tanis site lived entirely in freshwater, rather than migrating from salt and freshwater. And the details of the prehistoric sturgeon and paddlefish bones indicate that these fish had not yet hit the peak of their annual growth spurt, which would be expected during the warmest parts of the year. The carbon isotope ratios in the paddlefish bones also match up with this pattern.

If these ancient fish lived according to a similar annual cycle as their living relatives, then the signatures in their bones hint that they perished in spring. The fact that tiny spherules thrown into the air during the impact were found in their gills places the time of death within minutes or hours of the end-Cretaceous impact. Together, these lines of evidence suggest that the impact took place while the Northern Hemisphere was in spring and the Southern Hemisphere was still in winter.