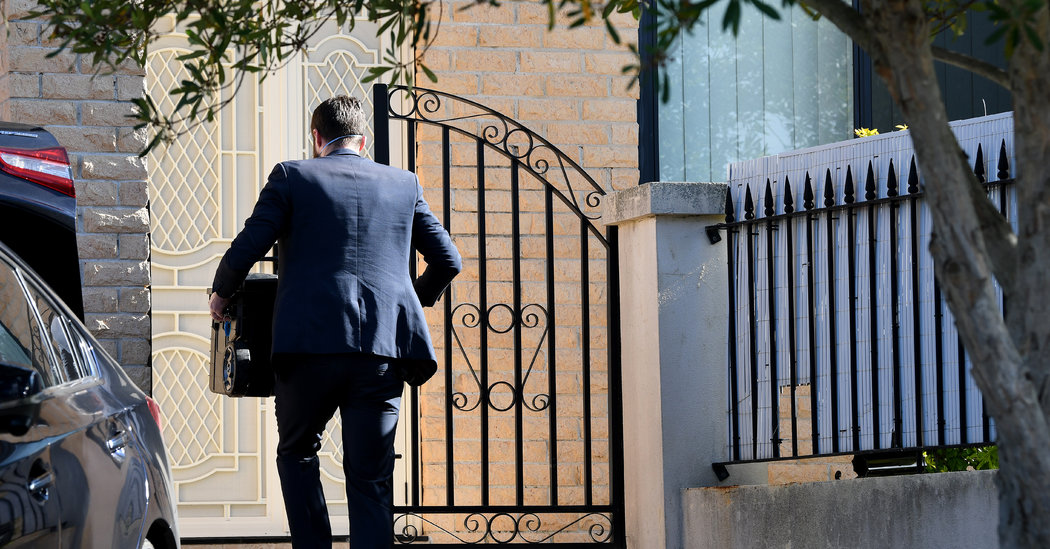 SYDNEY, Australia â€” The Australian authorities raided the home and office of a federal lawmaker on Friday as part of a sweeping investigation into allegations of a Chinese government plot to manipulate the politics and policy of Parliament.

Shaoquett Moselmane, a Labor politician from a Sydney suburb, recently praised Chinaâ€™s top leader, Xi Jinping, for his response to the coronavirus pandemic, a message sharply at odds with the Australian governmentâ€™s subsequent call for a global inquiry into the outbreakâ€™s origins.

Australiaâ€™s national security agency confirmed that a search warrant had been executed as part of an ongoing investigation, and Labor Party leaders quickly announced that Mr. Moselmaneâ€™s membership would be suspended. The authorities have not made public any evidence of illegal activities by Mr. Moselmane, who could not be reached for comment.

The case is the first high-profile criminal investigation of Chinese influence peddling to be made public since Australia passed a suite of foreign interference and espionage laws two years ago. The measures were aimed directly at Beijingâ€™s attempt to shape the countryâ€™s politics through donations, promises and pressure on politicians at every level of government.

The inquiry promises to further inflame tensions with Beijing, which have been accelerating since Australia began pushing in April for a fact-finding mission into the pandemic. China has bristled at criticism of its handling of the virus since it first emerged in Wuhan.

Officials in Beijing have retaliated against Australia by slashing agricultural imports and leveling threats of additional economic harm. They have warned Chinese tourists to avoid Australia because of what they described as racist mistreatment, and have issued similar guidance to students not to study in the country. That is a potentially a huge blow to Australiaâ€™s universities, which rely on international students for billions of dollars in revenue.

Peter Jennings, the executive director of the Australian Strategic Policy Institute, a nonpartisan think tank, called the inquiry involving Mr. Moselmane a test case for prosecutors and the countryâ€™s more aggressive effort to stand up to China after years of accommodation and unfettered trade.

â€œItâ€™s just another signpost on the journey,â€ Mr. Jennings said. â€œWhat weâ€™ve seen over a few years now is a deterioration in the relationship with China, which has largely come with the Chinese government pushing the limits of what is acceptable behavior on a range of fronts and Australian authorities pushing back, which China doesnâ€™t like.â€

The investigation tied to the raids on Friday, which were first reported by The Sydney Morning Herald, most likely began before the pandemic. One former official said the case had been building for months. Mr. Jennings, who worked for more than a decade in senior defense and intelligence roles, said it was probably one of many investigations.

Under the mandate of the new laws, which broadened the definition of espionage, he said the authorities would be exploring whether covert activities or agents directed by Beijing had sought to influence Australian politicians or their employees, and if they did, whether those involved were aware of the Chinese governmentâ€™s efforts.

â€œFrom the moment the new legislation appeared, I anticipated that our intelligence agencies would be looking for a case to test the laws out on,â€ Mr. Jennings said. He added: â€œThis is possibly one of the most egregious ones, but there is a system at play that affects more than one person. There is a network of connections that now I think will be drawn out.â€

The Chinese government has long treated Australia as a petri dish for experiments in influence, and its playbook is relatively well known.

Chinese consulates and other agencies tend to work closely with civic organizations in Australia that are tied to the United Front Work Department, the partyâ€™s arm for dealing with overseas Chinese. Leaders of these organizations frequently mix cultural events with politics and donations to political parties and candidates considered friendly to Beijing, or at least open to influence. Chinese-language media outlets directly or indirectly controlled by Beijing promote those they favor, and condemn those who resist.

The influence efforts led to the downfall of a promising Labor politician in 2017. The lawmaker, Sam Dastyari, was an up-and-comer known for his fund-raising when he resigned amid accusations that he had pushed Chinaâ€™s foreign policy interests after taking money from Chinese-born political donors.

Mr. Moselmaneâ€™s known ties to the Chinese government appear to be related more to personnel and travel. He has taken several privately funded trips to China over the past decade, with records showing costs covered by Chinese government officials or agencies.

He also came under scrutiny for hiring a part-time staff member, John Zhang, who has been linked by Chinese websites to a propaganda training course run by the Overseas Chinese Affairs Office, which is believed to be part of the United Front.

Mr. Moselmane has been especially bold in his pro-China pronouncements. Earlier this year, he praised Mr. Xiâ€™s â€œunswerving leadershipâ€ in handling the coronavirus crisis. At a 2018 event in the New South Wales Parliament, he declared: â€œThe only way for China to reach its potential is for China to force a change to the rules and create a new world order.â€

Some Australian officials, including George Brandis, Australiaâ€™s top diplomat in London who drafted the foreign interference laws when he was attorney general, have argued that the countryâ€™s new measures put it at the forefront of the global effort to rein in Chinaâ€™s attempted violations of sovereignty and democratic principles.

But regardless of the current caseâ€™s outcome, some international analysts are less certain that any legal consequences will alter the calculations or actions of a rising superpower determined to bend the world to its will.

â€œIf the case is prosecuted and leads to a verdict against the Chinese United Front organization or officials, it will certainly be embarrassing for Beijing,â€ said Bonnie Glaser, director of the China Power Project at the Center for Strategic and International Studies.

â€œI doubt that it would result in a radical change in such efforts, however,â€ she added. â€œThey might alter their tactics, but the UF operations are essential for promoting Chinese interests and wonâ€™t be easily abandoned.â€