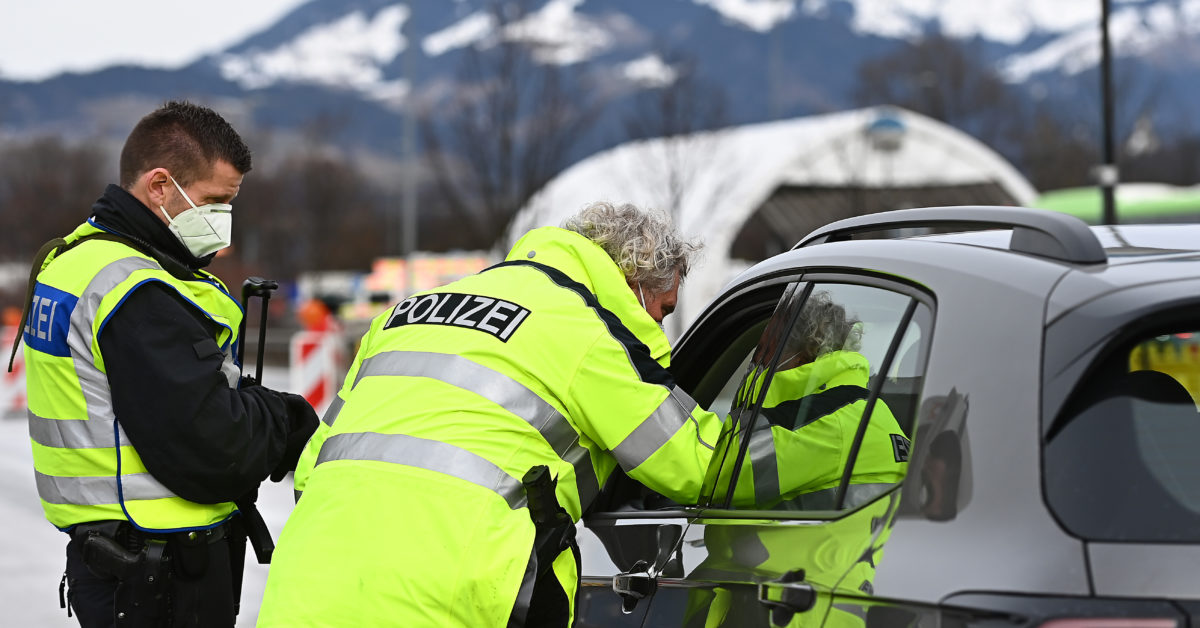 BERLIN â€” Germany is ignoring concerns from the European Commission and imposing tough coronavirus controls along its southern border, leading to traffic jams as far away as Italy.

Restrictions on Germanyâ€™s frontiers with the Czech Republic and Austria’s Tyrol region came into effect on Sunday, with Slovakia also considered a high-risk territory although the country does not share a direct border. By early Monday federal police in Germany had checked 10,000 people and turned roughly half of those away at the border, setting off massive traffic jams.

The EUâ€™s Justice Commissioner Didier Reynders said in an emailed statement Monday that EU countries had agreed on a common approach to manage COVID risk: â€œThis approach is and remains the right one because it strikes the balance between preventing the virus from spreading further and safeguarding free movement in the EU. Unilateral decisions to close borders risk causing fragmentation and disruptions to essential supply chains and jeopardize the EUâ€™s internal market.â€

He said the Commission would send a letter to member countries â€œto remind them of their commitments.â€

That isnâ€™t getting much traction with Berlin. Over the weekend, German Interior Minister Horst Seehofer swiped at “cheap” advice from Brussels.

â€œBorder controls in the heart of Europe are painful, but there is currently no other way to stop the virus,” Seehofer said in a statement Monday. He did promise to coordinate with neighboring countries. “We will return to normal as soon as possible.”

However, what coordination there is seems to be limited to tit-for-tat retaliation.

In response to Germany’s rule change, Czech authorities announced measures mandating that transport workers crossing the country on the way to Germany carry a negative test no older than 36 hours. On Sunday, Austriaâ€™s Tyrol region, which has long been battling to cut transit traffic, announced it was going to limit truck movements and check whether drivers meet Berlinâ€™s â€œexit conditions” to prevent â€œkilometers-long backlogs and massive traffic obstructionsâ€ on its access road to Germany.Â

There were jams of up to 20 kilometers on the Czech-German border on Monday, according to German media, while the queues at Austria’s border with Italy were 40 kilometers long.

While the restrictions remain limited to just a portion of Germany’s southeastern border, France’s Europe Minister ClÃ©ment Beaune is calling the leaders of nearby German states hoping to avoid any imposition of controls on the Franco-German frontier.

“I will continue contacts with German authorities this week,” he said. “The continuation of cross-border activity and a coordinated approach to borders are our compass.”

Germany’s testing rules are a nightmare for the Continentâ€™s truckers, as Berlin’s controls state that hauliers entering the country from the Czech Republic and Tyrol should pre-register and carry a negative test result thatâ€™s no older than 48 hours.

The logistics industry warned the European Commission in January that Germanyâ€™s travel scheme, which has no testing exemption for drivers returning from so-called â€œvirus mutationâ€ areas, “would create major disruptions.”

Truckers fear a repeat of the experience of hauliers trapped in the U.K. over Christmas after the French government introduced new testing requirements in response to fears over a new strain of coronavirus.

The Alpine Brenner Pass, a key north-south axis connecting Austria and Italy, carries about the same number of trucks every day as the Dover-Calais link, and â€œtens of thousands moreâ€ cross into Germany via the Czech Republic, many laden with components for manufacturing plants.

Germany’s top auto lobbyist warned Friday that border delays would have a knock-on impact on factories.

â€œMany parts for automobile production at German locations are delivered just-in-time or just-in-sequence directly to the assembly line from Austria and the Czech Republic,” said Hildegard MÃ¼ller, who runs the VDA lobby group representing the likes of Volkswagen, Daimler and BMW.

EU countries struck a deal earlier this month under which transport workers should â€œin principleâ€ not be tested, but if they are, they should be given rapid tests to keep border traffic moving as smoothly as possible.

Road transport organization IRU demanded that the Commission “stand up for the free movement of goods” and force Germany to back down.

â€œThe EU must stand firm and these individual countries must stand down,” said Umberto de Pretto, IRU’s secretary-general. The irony, he said, is that truckers spend most of their day confined to their truck cabins and have little chance of spreading the virus.