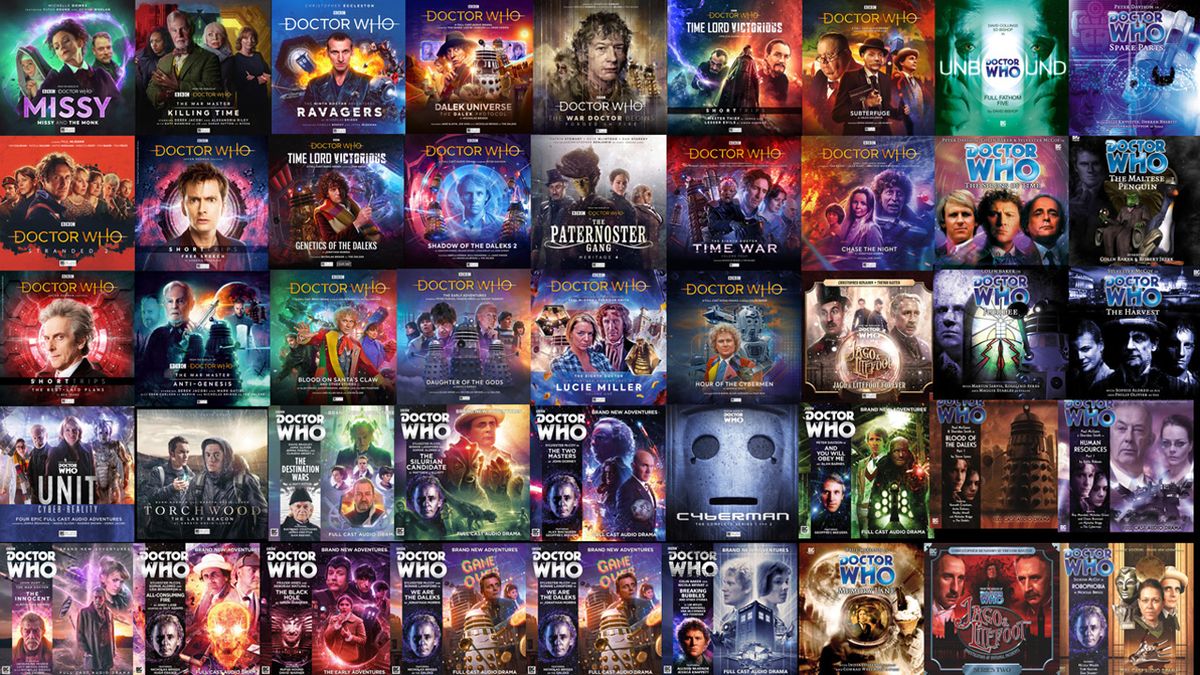 It can be hard to say goodbye, watching as your favorite Doctor dissolves into a cloud of pixie dust, never to been seen on screen again â€“ anniversary specials aside. You could just rewatch old episodes (and our Doctor Who streaming guide can help you there). Or, thanks to publisher Big Finish, you can enjoy new audio adventures with many of your favorite Doctors long after their run on the TV show has ended.

The company has, for over twenty years, been producing full-cast audio plays that either feature the Doctor or are set in the Doctor Who universe. What makes these productions stand out, apart from the general quality of the writing, is that Big Finish has managed to entice eight former Doctors (including Christopher Eccleston) into returning to their roles â€“ itâ€™ll have you debating Doctor Who Doctors, ranked worst to best, all over again.

Theyâ€™ve yet to net Matt Smith or Peter Capaldi, but thereâ€™s a good chance your favorite Doctor lives on. Even Colin Baker, the Sixth Doctor, who was fired from Doctor Who, has been given a second lease of life at Big Finish. Alongside the Doctors themselves, plenty of the best Doctor Who villains also make their returns in these audio dramas, including fan favorites like the Daleks and Cybermen.

The BBC does impose some limitations, but there are more series and spin-offs than you can shake a sonic screwdriver at. Torchwood: Miracle Day may have sunk Torchwoodâ€™s hope of a revival but, minus John Barrowman, it lives on at Big Finish. A few tales fill in gaps left by the show. Wonder what else Martha Jones got up to during her year away from the Doctor? The Year of Martha Jones has you covered.

But, with so much on offer (including a great many stories which have made their way to Spotify), which audio tales are worth your time and money? Hereâ€™s our pick of Big Finishâ€™s best Doctor Who audio dramas.

Listen to Doctor Who audio dramas on Amazon Prime

10. Missy and the Monk: Body and Soulless

Like Derek Jacobi, Michelle Gomez clearly has a whale of a time playing The Master or, in this case, Missy. Missy and the Monk is the third set of Missy stories, proving she can have adventures without her arch-nemesis. However, this time sheâ€™s got the perfect comedic foil in the form of Rufus Houndâ€™s Meddling Monk.

Body and Soulless sees Missy deciding to save a planet from alien invaders, with no apparent benefit to herself.Â  But if sheâ€™s turning over a new leaf, why does she have the Monkâ€™s very vocal brain in her handbag? Finding out is a lot of fun.

9. Torchwood: The Office of Never Was

An office building might not, technically, be a haunted house, but if youâ€™ve ever stayed late youâ€™ll appreciate The Office of Never Wasâ€™s fear factor. This solo Torchwood escapade sees Ianto Jones investigating an office block thatâ€™s spoken about in whispers.

Surprisingly, The Office of Never Was pulls off its sharply-written, not-a-haunted-house story with a mere three performers. Gareth David-Lloyd steals the show as the affable Ianto, who stripped of Torchwoodâ€™s support, struggles to deal with the unexplainable. Youâ€™re right there with him, jumping at every little sound, and itâ€™s his performance that makes the bombshell ending all that more chilling.

8. Doctor Who: The Starship of Theseus

The Starship of Theseus, the first story from Doctor Who: Time War 1, reveals the terrifying true cost of the Dalek/Time Lord conflict. Reality itself is in flux, to the point where people, planets, and even whole civilizations can blink out of existence.

What makes this Eighth Doctor adventure so disturbing is that no-one, not even the Doctor, notices these changes. Well, no-one except you, and The Starship of Theseus exploits your awareness to maximum effect. Youâ€™ll raise an eyebrow when the Doctor addresses his companion by an unfamiliar name, but thatâ€™s just start of this nightmare.

What is Davros without his Daleks? Thatâ€™s a question Doctor Whoâ€™s T.V. incarnation has rarely asked, letting him be eclipsed by his own creations. This Dalek-free Sixth Doctor adventure delivers the answer, though it does its very best to keep you guessing.

Put to work by a wealthy but foolhardy entrepreneur, Davros promises that 90 years in suspended animation has changed him, and he intends to work for the betterment of mankind. Has he changed? Itâ€™s a testament to Terry Molloyâ€™s performance (reprising his role as Davros) that, no matter how much Who youâ€™ve watched, youâ€™ll almost believe him.

Over thirty years after their appearance in The Talons of Weng-Chiang, Big Finish gave Victorian investigators Professor George Litefoot (Trevor Baxter) and Henry Gordon Jago (Christopher Benjamin) their own series. The pairing of Litefootâ€™s buttoned-up professor and the larger-than-life showman Jago proved so popular it continued up until the passing of star Trevor Baxter.

Their adventures are almost always a joy, but partnering them with Strax (Dan Starkey), the well-meaning but war-happy Sontaran, is a stroke of genius. The trio pick up the trail of a brain-stealing beast, which may or may not be hiding out in a haunted house, and the Strax-assisted shenanigans escalate from there.

This audio outing proves that two Doctors are better than one, particularly if the Doctors in question are David Tennant and Tom Baker. Set after The Waters of Mars, Out of Time 1 sees the pair protecting a time-spanning cathedral from the Daleks who seek to abuse its power.

Barring some serious CGI de-aging, this is the kind of crossover that can exist only as audio. Tennant and Baker are on top form and the banter flows like wine, but thereâ€™s still room for introspection. The Fourth Doctor, for example, might not have unmade the Daleks, but the new, colder Tenth would do it without a second thought.

The revived Doctor Who series parted ways with Derek Jacobiâ€™s Master after a single episode, most of which he spent as the kindly Professor Yana. So, itâ€™s fallen to Big Finish to let him shine as The War Master, a role Jacobi absolutely revels in.

Anti-Genesis is as much about the nature of the Daleks as it is the War Master himself. After arranging an â€œaccidentâ€ for a young Davros, he crowns himself creator of the Daleks, but he may have bitten off more than he can chew and itâ€™s absolutely glorious to see (or hear) him realize it.

3. Doctor Who: The Chimes of Midnight

The Doctor Who T.V. movie may have been a dead end, but Big Finish have breathed new life into Paul McGannâ€™s Eighth Doctor, pairing him with would-be adventuress Charley Pollard. The Chimes of Midnight is their sixth outing together and follows the fine if often forgotten tradition of Christmas ghost stories.

The twist is that the Doctor and Charley are the ghosts, looking in on a murder that keeps replaying itself. Yes, you know thereâ€™s going to be some semi-scientific explanation at the end, but framed by the trappings of a Victorian Christmas, itâ€™s haunting in exactly the right ways.

2. Doctor Who – Unbound: Sympathy for the Devil

Sympathy for the Devil is an alternative universe tale where, without the Doctorâ€™s assistance, UNIT have floundered. When the Doctor does turn up, much too late, he meets an embittered ex-Brigadier Lethbridge-Stewart and a mystery begins to unfold.

Aside from being a superb story in its own right, a politically charged narrative set against the backdrop of the Hong Kong handover, itâ€™s notable for its cast. David Warner plays the Doctor, Nicholas Courtney returns as Lethbridge-Stewart, and a pre-Doctor David Tennant is an officious UNIT Colonel. Mark Gatiss, who went on to write Doctor Who and Sherlock, also features as… well, I wonâ€™t spoil it.

Long before Trigger from Only Fools and Horses started hacking out peopleâ€™s brains and shoving them into metal suits, Big Finish delivered their own Cyberman origin story. Spare Parts sees the Seventh Doctor landing on Mondas, Earthâ€™s doomed twin planet, and becoming embroiled in the Cybermenâ€™s creation.

What makes Spare Parts different, from say Genesis of the Daleks, is that thereâ€™s no malice fueling the birth of the Cybermen. Instead, theyâ€™re the last, desperate hope of a dying populace. The Cybermenâ€™s unsettling sing-song voices, mirroring their first appearance in The Tenth Planet, are the icing on the tinfoil-covered cake.