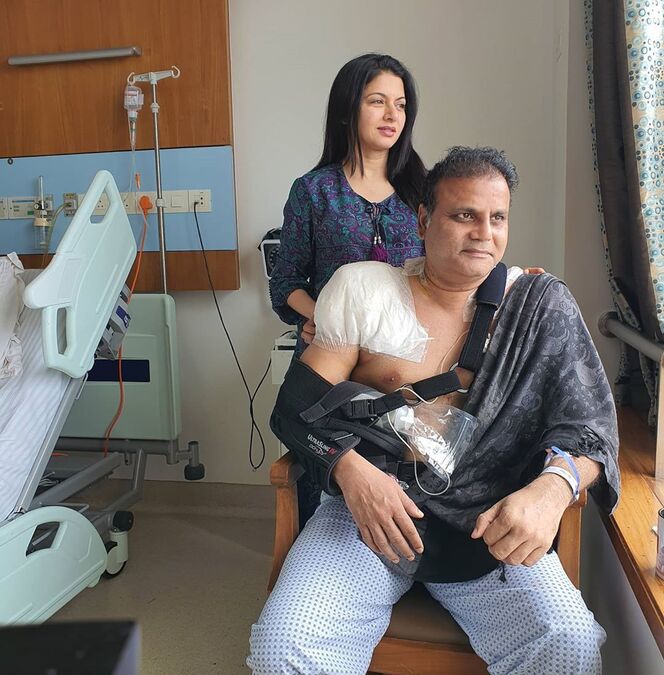 Actress Bhagyashree on Thursday shared that her husband, Himalaya Dasani, has undergone a shoulder surgery. Taking to Instagram, Bhagyashree posted a few pictures of her husband from the hospital ward. She also praised doctors and staff for following proper Covid-19 safety precautions.

“Surgery done! Not a time that anyone would ever venture even near a hospital but unfortunately a freak accident left us with no choice. Dr. Dinshaw Pardiwala did an excellent job. I truly thank all the Ambani staff, doctors and nurses for looking after us.Perfect Covid protocol is maintained at all times. The Covid positive patients and staff attending to them are on a separate floor, so there is no intermingling,” she wrote.

“I want to thank all my well wishers for their prayers and wishes. We shall be going home soon,” she added.

Bhagyashree got married to Himalaya after making her Bollywood debut in blockbuster 1989 film “Maine Pyar Kiya”.

Himalaya forayed Bollywood as a hero opposite Bhagyashree in the 1992 release, “Qaid Mein Hai Bulbul”. However, the film failed.

Later, Himalaya and Bhagyashree co-starred in two other films the same year. They were seen together in “Tyagi”, which also starred Rajinikanth, and “Paayal”.

However, neither of these films helped Himalaya’s career take off.

The couple has two children — son Abhimanyu, who is an actor, and daughter Avantika.