Biden Ends Speech In Poland By Calling For Putin’s Removal 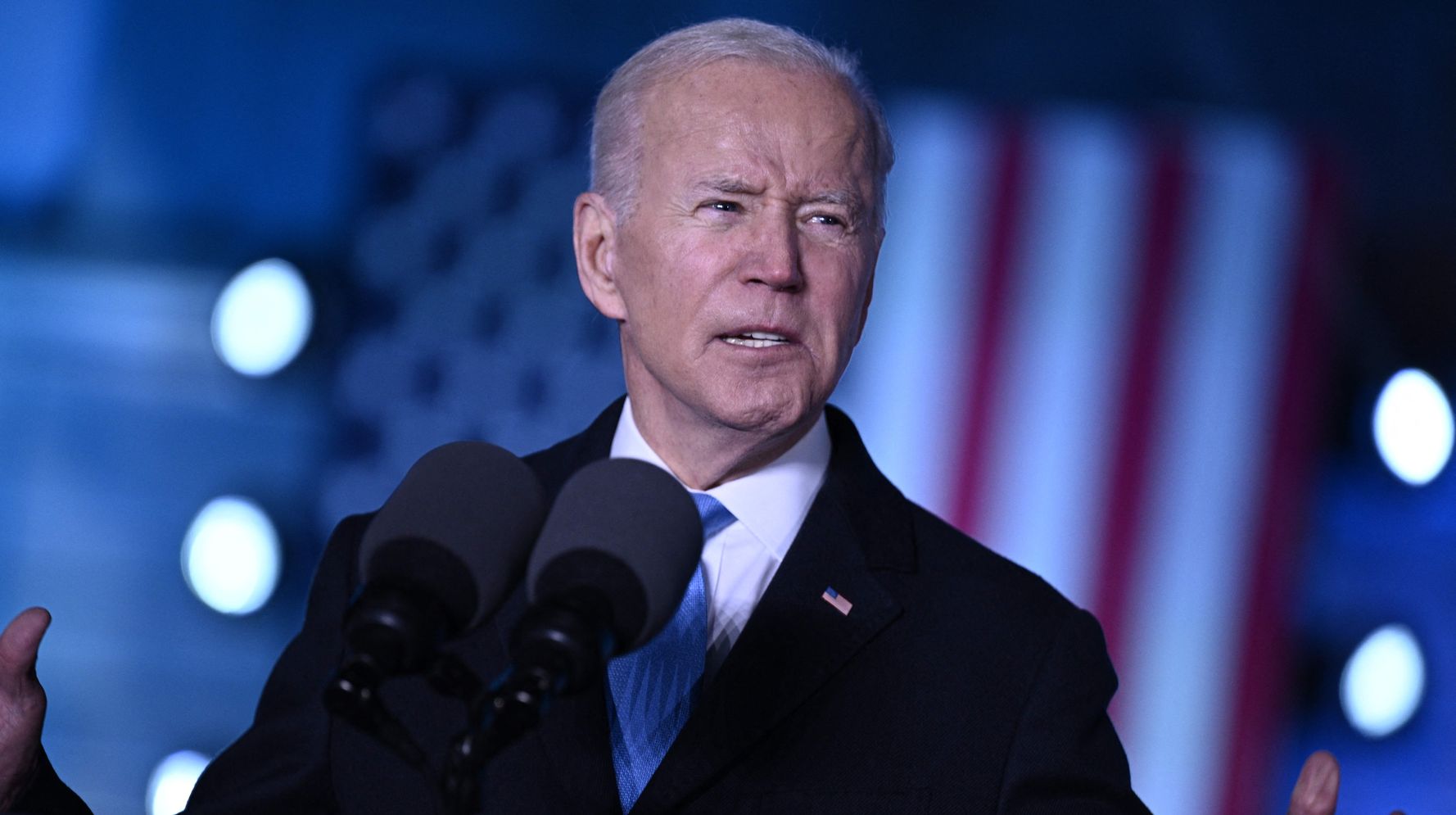 â€œFor Godâ€™s sake, this man cannot remain in power,â€ Biden said at the very end of a speech in Polandâ€™s capital that served as the capstone on a four-day trip to Europe.

Even as Bidenâ€™s words rocketed around the world, the White House attempted to clarify soon after Biden finished speaking in Poland.

A White House source told HuffPost that Biden was not suggesting Putin no longer serve within Russian government.

â€œThe presidentâ€™s point was that Putin cannot be allowed to exercise power over his neighbors or the region,â€ the official, who preferred to speak under condition of anonymity, said. â€œHe was not discussing Putinâ€™s power in Russia, or regime change.â€

The White House declined to comment on whether Bidenâ€™s statement about Putin was part of his prepared remarks.

Biden has frequently talked about ensuring that the Kremlinâ€™s now invasion, now in its second month, becomes a â€œstrategic failureâ€ for Putin and has described the Russian leader as a â€œwar criminal.â€ But until his remarks in Warsaw, the American leader had not veered toward suggesting Putin should not run Russia. Earlier on Saturday, shortly after meeting with Ukrainian refugees, Biden called Putin a â€œbutcher.â€

Biden also used his speech to also make a vociferous defense of liberal democracy and the NATO military alliance, while saying Europe must steel itself for a long fight against Russian aggression.

Earlier in the day, as Biden met with Ukrainian refugees, Russia kept up its pounding of cities throughout Ukraine. Explosions rang out in Lviv, the closest major Ukrainian city to Poland and a destination for the internally replaced that has been largely spared from major attacks.

The images of Biden reassuring refugees and calling for Western unity contrasted with the dramatic scenes of flames and black smoke billowing so near the Polish border â€” another jarring split-screen moment in the war.

In what was billed by the White House as a major address, Biden spoke inside the Royal Castle, one of Warsawâ€™s notable landmarks that was badly damaged during War II.

He borrowed the words of Polish-born Pope John Paul II and cited anti-communist Polish dissident and former president, Lech Walesa, as he warned that Putinâ€™s invasion of Ukraine threatens to bring â€œdecades of war.â€
â€œIn this battle we need to be clear-eyed. This battle will not be won in days, or months, either,â€ Biden said.

The crowd of about 1,000 included some of the Ukrainian refugees who have fled for Poland and elsewhere in the midst of the brutal invasion.

â€œWe must commit now, to be this fight for the long haul,â€ Biden said.

Biden also rebuked Putin for his claim the the invasion sought to â€œde-Nazifyâ€ Ukraine. The president of Ukraine. Volodymyr Zelensky, is Jewish and his fatherâ€™s family died in the Holocaust.

Biden also tried to tie the invasion to the former Soviet Unionâ€™s history of brutal oppression, including the post-World War II military operations to stamp out pro-democracy movements in Hungary, Poland and what was then Czechoslovakia.

The president defended the 27-member NATO alliance that Moscow says is increasingly a threat to Russian security. He noted that NATO had worked for months through diplomatic channels to try to head off Russiaâ€™s invasion.
The war has led the U.S. to increase its military presence in Poland and Eastern Europe, and Nordic nations such as Finland and Sweden are now considering applying to join NATO.

â€œThe Kremlin wants to portray NATO enlargement as an imperial project aimed to destabilize in Russia,â€ Biden said. â€œNATO is a defensive alliance that has never sought the demise of Russia.â€

After meeting with refugees at the National Stadium, Biden marveled at their spirit and resolve in the aftermath of Russiaâ€™s deadly invasion as he embraced mothers and children and promised enduring support from Western powers.

Biden listened intently as children described the perilous flight from neighboring Ukraine with their parents. Smiling broadly, he lifted up a young girl in a pink coat and told her she reminded him of his granddaughters.

The president held hands with parents and gave them hugs during the stop at the soccer stadium where refugees go to obtain a Polish identification number that gives them access to social services such as health care and schools.

Some of the women and children told Biden that they fled without their husbands and fathers, men of fighting age who were required to remain behind to aid the resistance against Putinâ€™s forces.

â€œWhat I am always surprised by is the depth and strength of the human spirit,â€ Biden told reporters after his conversations with the refugees at the stadium, which more recently had served as a field hospital for COVID-19 patients. â€œEach one of those children said something to the effect of, â€™Say a prayer for my dad or grandfather or my brother who is out there fighting.â€

The president spent time reassuring Poland that the U.S. would defend against any attacks by Russia as he acknowledged that the NATO ally bore the burden of the refugee crisis from the war.

More than 3.7 million people have fled Ukraine since the war began, and more than 2.2 million Ukrainians have crossed into Poland, though it is unclear how many have remained there and how many have left for other countries. Earlier this week the U.S. announced it would take in as many as 100,000 refugees, and Biden told Duda that he understood Poland was â€œtaking on a big responsibility, but it should be all of NATOâ€™s responsibility.â€

Biden called the â€œcollective defenseâ€ agreement of NATO a â€œsacred commitment,â€ and said the unity of the Western military alliance was of the utmost importance.

â€œIâ€™m confident that Vladimir Putin was counting on dividing NATO,â€ Biden said. â€œBut he hasnâ€™t been able to do it. Weâ€™ve all stayed together.â€

European security is facing its most serious test since World War II. Western leaders have spent the past week consulting over contingency plans in case the conflict spreads. The invasion has shaken NATO out of any complacency it might have felt and cast a dark shadow over Europe.

No clear path to ending the conflict has emerged. Although Russian officials have suggested they will focus their invasion on the Donbas, a region in eastern Ukraine, Biden told reporters, when asked whether the Kremlin had changed its strategy, â€œI am not sure they have.â€