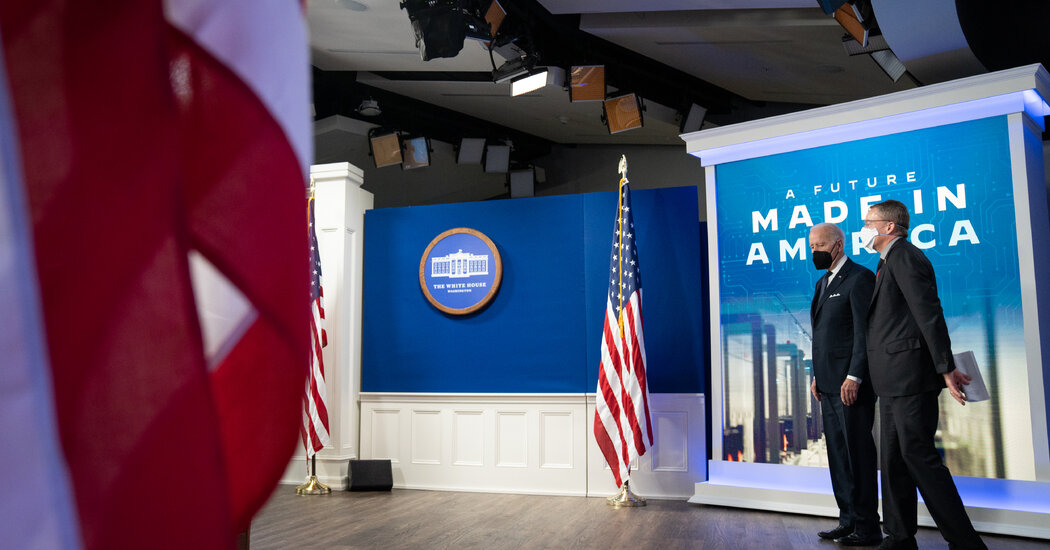 WASHINGTON â€” In celebrating a $20 billion investment by Intel in a new semiconductor plant in Ohio, President Biden sought on Friday to jump-start a stalled element of his economic and national security agenda: a huge federal investment in manufacturing, research and development in technologies that China is also seeking to dominate.

With two other major legislative priorities sitting moribund in Congress â€” the Build Back Better Act and legislation to protect voting rights â€” Mr. Biden moved to press for another bill, and one that has significant bipartisan support.

But he has lost seven critical months since the Senate passed the measure, a sprawling China competition bill that would devote nearly a quarter of a trillion dollars to domestic chip manufacturing, artificial intelligence research, robotics, quantum computing and a range of other technologies. The bill amounts to the most expansive industrial policy legislation in U.S. history.

Speaking at the White House, Mr. Biden said that America was in a â€œstiff economic and technological competitionâ€ with China. He chose the words deliberately, knowing that while it sounds obvious to American ears, Chinese officials in recent months have protested the use of the word â€œcompetition,â€ declaring that it has echoes of a Cold War-like contest.

He argued that the initiative would be a long-term solution to supply chain disruptions and rising inflation and would free American weapons systems from depending on foreign parts.

After months in which he rarely mentioned the China competition bill so that he did not lose focus on other elements of his agenda, Mr. Biden said on Friday that its passage was needed â€œfor the sake of our economic competitiveness and our national security.â€

â€œToday, we barely produce 10 percent of the computer chips despite being a leader in chip design and research,â€ he said. â€œWe donâ€™t have the ability to make the most advanced chips now, right now.â€

Pervasive shortages of chips, which are needed to power everything from cars and washing machines to medical equipment and electrical grids, have forced some factories to shutter their production lines and knocked a full percentage point off U.S. growth last year, according to some estimates.

While the Biden administration has billed Intelâ€™s new investment near Columbus, Ohio, as a partial remedy for supply chain disruptions that have led to global chip shortages and spurred inflation, the project would do little to resolve any economic problems in the short term. The Ohio plant, the first phase of what Intel said could be an investment of up to $100 billion, is not expected to begin operation until 2025, and many analysts have forecast chip shortages to begin to abate later this year.

But in addition to providing positive headlines for a beleaguered White House, Intelâ€™s plans may help build momentum for a key element of Mr. Bidenâ€™s agenda that was set aside as lawmakers contended with ambitious bills on infrastructure, social spending and voting rights. Speaker Nancy Pelosi indicated on Thursday that House committees would soon turn to negotiations with the Senate to move the China competition legislation toward a vote.

When the bill passed the Senate by a wide margin in June, it was sold in part as a jobs plan and in part as a move to avoid leaving the United States perilously dependent on its biggest geopolitical adversary.

China is not yet a major producer of the worldâ€™s most advanced chips, and it does not have the capability to make semiconductors with the smallest circuits â€” in part because the United States and its allies have blocked it from purchasing lithography equipment needed to make those chips.

But Beijing is pumping vast amounts of government funding into developing the sector, and it is also flexing its military reach over Taiwan, one of the largest manufacturers of advanced chips. China accounted for 9 percent of global chip sales in 2020, barely trailing the global market share of Japan and the European Union, according to the Semiconductor Industry Association. That was up from only 3.8 percent of global chip sales five years ago.

At the World Economic Forum this week, Ursula von der Leyen, the president of the European Commission, announced plans for Europe to propose its own legislation early next month to promote the development of the semiconductor industry and to anticipate shortages.

John Neuffer, the chief executive of the Semiconductor Industry Association, said Japan, South Korea, India and other countries were also introducing their own incentives in a bid to attract a strategically important industry.

â€œThe clock is ticking,â€ Mr. Neuffer said. â€œNone of us are working in a vacuum. This is a global industry.â€

Mr. Bidenâ€™s push to enact the China competition bill comes amid growing frustration in corporate circles with his economic policies toward the country. Executives have complained that the administration still has not clarified whether it will lift any of the tariffs that President Donald J. Trump placed on China or how it will press Beijing for further trade concessions.

The bill that passed the Senate, known as the U.S. Innovation and Competition Act, contains a range of provisions aimed at spurring the U.S. economy to take on China, but its centerpiece is $52 billion in federal investments to encourage chip research, design and manufacturing in the United States.

The chip funding itself has broad bipartisan support and could be passed into law as soon as the next few months, supporters say; the question is whether other measures that have been tucked in the package will sink its prospects. The Senate bill includes a number of trade-related provisions that some House Democrats may oppose, including an investigation into foreign digital trade practices.

The global shortage of chips and the pernicious inflation that has accompanied it have spurred more interest in enticing semiconductor manufacturing to the United States. But whether Congress approves billions of dollars in new funding â€” and how the Biden administration decides to distribute it â€” appears likely to determine whether an investment like Intelâ€™s is a one-time occurrence or a trend.

Companies including Taiwan Semiconductor Manufacturing Company, Texas Instruments, Micron Technology and SK Group have all announced recent expansions in the United States. Samsung has promised a $17 billion facility in Texas, while GlobalFoundries has committed to a second factory in New York.

But the center of gravity for the global industry is still in East Asia. While the United States accounts for much cutting-edge research and design in the chip industry, it has gone from being the worldâ€™s largest producer of semiconductors several decades ago to mostly outsourcing production to Asian factories.

That has proved to be a vulnerability as pandemic-related shutdowns left companies around the world short of workers and raw materials, leading to shortages and spiraling prices for a variety of goods, especially semiconductors. Automakers in particular have been affected, with almost every major carmaker forced to curtail production last year.

Chip shortages have also become one of the largest single factors stoking inflation, now a key gripe among American voters as the midterm elections approach. Inflation hit a 40-year high in December, buoyed by a 37 percent increase in the price of used cars.

In an effort to ease the chip shortages, the Biden administration has convened gatherings with semiconductor executives, established a global alert system to identify shortages and requested vast amounts of information from chip companies on potential bottlenecks. The Commerce Department is expected to release some of that information publicly before the end of the month.

Gina Raimondo, the commerce secretary, said in a statement on Friday that Intelâ€™s investment was a win for the company, for American manufacturing and for â€œAmerican consumers who can look forward to lower prices as we bring home production of the semiconductors that keep our economy running.â€

But analysts say the administration has little control over any short-term trends in the industry, given the long lead times necessary to build semiconductor facilities.

Mr. Neuffer said his industry applauded the attention the White House was giving to the sector, including encouraging companies to share more information. â€œBut the reality is, thereâ€™s only so much government can do,â€ he said. â€œThese are very complicated, deep global supply chains, and the market is just going to have to work through this.â€