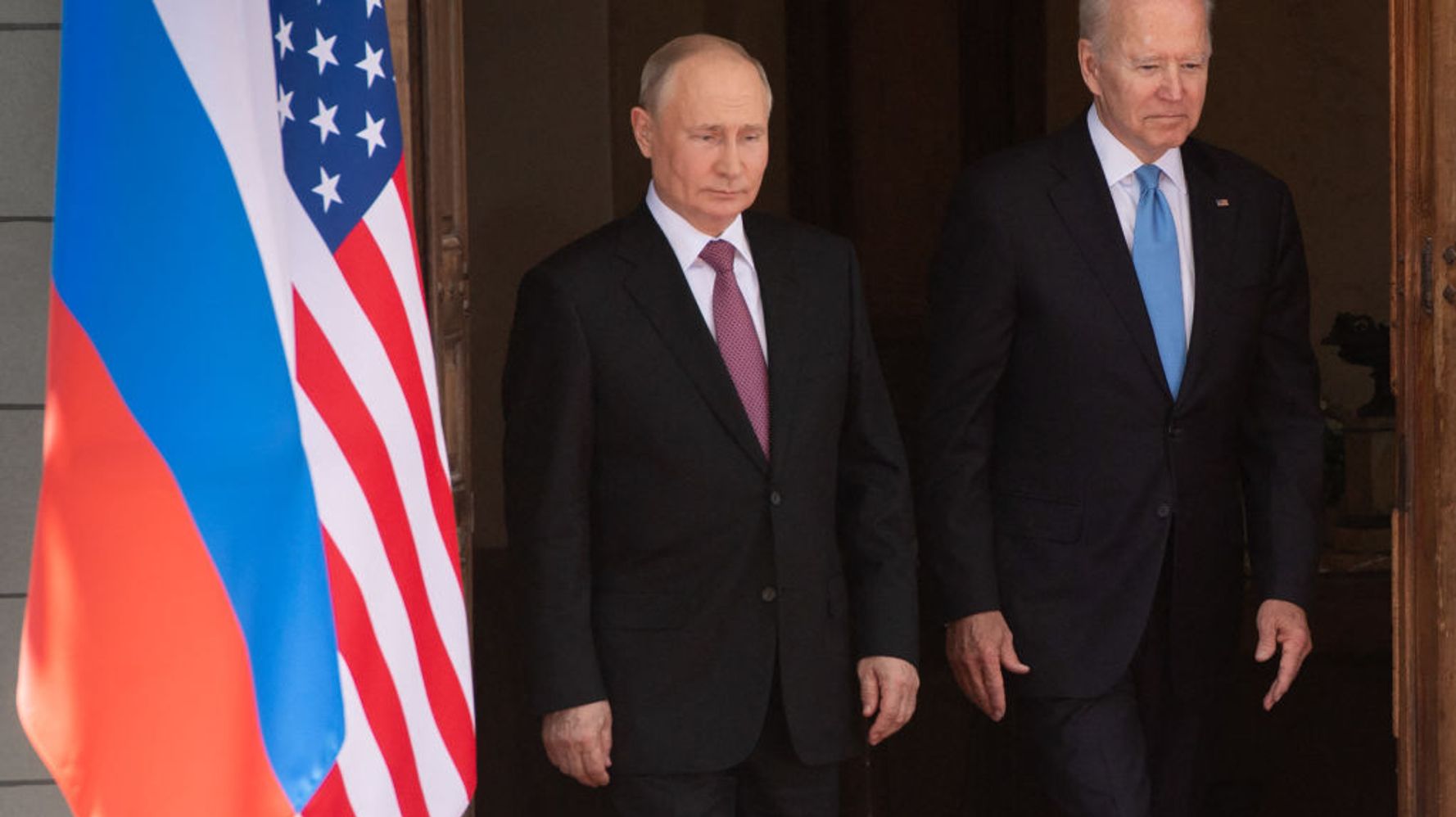 WASHINGTON (AP) â€” President Joe Biden told Russiaâ€™s Vladimir Putin that invading Ukraine would cause â€œwidespread human sufferingâ€ and that the West was committed to diplomacy to end the crisis but â€œequally prepared for other scenarios,â€ the White House said Saturday. It offered no suggestion that the hourlong call diminished the threat of an imminent war in Europe.

Biden also said the United States and its allies would respond â€œdecisively and impose swift and severe costsâ€ if the Kremlin attacked its neighbor, according to the White House.

The two presidents spoke a day after Bidenâ€™s national security adviser, Jake Sullivan, warned that U.S. intelligence shows a Russian invasion could begin within days and before the Winter Olympics in Beijing end on Feb. 20.

Russia denies it intends to invade but has massed well over 100,000 troops near the Ukrainian border and has sent troops to exercises in neighboring Belarus, encircling Ukraine on three sides. U.S. officials say Russiaâ€™s buildup of firepower has reached the point where it could invade on short notice.

The conversation came at a critical moment for what has become the biggest security crisis between Russia and the West since the Cold War. U.S. officials believe they have mere days to prevent an invasion and enormous bloodshed in Ukraine. And while the U.S. and its NATO allies have no plans to send troops to Ukraine to fight Russia, an invasion and resulting punishing sanctions could reverberate far beyond the former Soviet republic, affecting energy supplies, global markets and the power balance in Europe.

â€œPresident Biden was clear with President Putin that while the United States remains prepared to engage in diplomacy, in full coordination with our Allies and partners, we are equally prepared for other scenarios,â€ the White House statement said.

The call was â€œprofessional and substantiveâ€ but produced â€œno fundamental change in the dynamic that has been unfolding now for several weeks,â€ according to a senior administration official who briefed reporters following the call on condition of anonymity.

The official added that it remains unclear whether Putin has made a final decision to move forward with military action.

Yuri Ushakov, Putinâ€™s top foreign policy aide, said that while tensions have been escalating for months, in recent days â€œthe situation has simply been brought to the point of absurdity.â€

He said Biden mentioned the possible sanctions that could be imposed on Russia, but â€œthis issue was not the focus during a fairly long conversation with the Russian leader.â€

Before talking to Biden, Putin had a telephone call with French President Emmanuel Macron, who met with him in Moscow earlier in the week to try to resolve the crisis. A Kremlin summary of the call suggested that little progress was made toward cooling down the tensions.

Putin complained in the call that the United States and NATO have not responded satisfactorily to Russian demands that Ukraine be prohibited from joining the military alliance and that NATO pull back forces from Eastern Europe.

In a sign that American officials are getting ready for a worst-case scenario, the United States announced plans to evacuate most of its staff from the embassy in the Ukrainian capital, and Britain joined other European nations in urging its citizens to leave Ukraine.

The timing of any possible Russian military action remained a key question.
The U.S. picked up intelligence that Russia is looking at Wednesday as a target date, according to a U.S. official familiar with the findings. The official, who was not authorized to speak publicly and did so only on condition of anonymity, would not say how definitive the intelligence was.

U.S. Secretary of State Antony Blinken said he told his Russian counterpart Saturday that â€œfurther Russian aggression would be met with a resolute, massive and united trans-Atlantic response.â€

Meanwhile, Ukrainian President Volodymyr Zelenskyy tried to project calm as he observed military exercises Saturday near Crimea, the peninsula that Russia seized from Ukraine in 2014.

â€œWe are not afraid, weâ€™re without panic, all is under control,â€ he said.

â€œWe are ready to meet the enemy, and not with flowers, but with Stingers, Javelins and NLAWsâ€ â€” anti-tank and -aircraft weapons, they said. â€œWelcome to hell!â€

Further U.S.-Russia tensions arose on Saturday when the Defense Ministry summoned the U.S. embassyâ€™s military attache after it said the navy detected an American submarine in Russian waters near the Kuril Islands in the Pacific. The submarine declined orders to leave, but departed after the navy used unspecified â€œappropriate means,â€ the ministry said.

Adding to the sense of crisis, the Pentagon ordered an additional 3,000 U.S. troops to Poland to reassure allies.

The U.S. has urged all American citizens in Ukraine to leave the country immediately, and Sullivan said those who remain should not expect the U.S. military to rescue them in the event that air and rail transportation is severed after a Russian invasion.

The Biden administration has been warning for weeks that Russia could invade Ukraine soon, but U.S. officials had previously said the Kremlin would likely wait until after the Winter Games ended so as not to antagonize China.

Sullivan told reporters on Friday that U.S. intelligence shows that Russia could take invade during the Olympics. He said military action could start with missile and air attacks, followed by a ground offensive.

Russia scoffed at the U.S. talk of urgency.

â€œThe hysteria of the White House is more indicative than ever,â€ said Maria Zakharova, a Russian Foreign Ministry spokeswoman. â€œThe Anglo-Saxons need a war. At any cost. Provocations, misinformation and threats are a favorite method of solving their own problems.â€

Zakharova said her country had â€œoptimizedâ€ staffing at its own embassy in Kyiv in response to concerns about possible military actions from the Ukrainian side.

In addition to the more than 100,000 ground troops that U.S. officials say Russia has assembled along Ukraineâ€™s eastern and southern borders, the Russians have deployed missile, air, naval and special operations forces, as well as supplies to sustain a war. This week, Russia moved six amphibious assault ships into the Black Sea, augmenting its capability to land marines on the coast.

Biden has bolstered the U.S. military presence in Europe as reassurance to allies on NATOâ€™s eastern flank. The 3,000 additional soldiers ordered to Poland come on top of 1,700 who are on their way there. The U.S. Army also is shifting 1,000 soldiers from Germany to Romania, which like Poland shares a border with Ukraine.

Russia is demanding that the West keep former Soviet countries out of NATO. It also wants NATO to refrain from deploying weapons near its border and to roll back alliance forces from Eastern Europe â€” demands flatly rejected by the West.

Russia and Ukraine have been locked in a bitter conflict since 2014, when Ukraineâ€™s Kremlin-friendly leader was driven from office by a popular uprising. Moscow responded by annexing the Crimean Peninsula and then backing a separatist insurgency in eastern Ukraine, where fighting has killed over 14,000 people.

A 2015 peace deal brokered by France and Germany helped halt large-scale battles, but regular skirmishes have continued, and efforts to reach a political settlement have stalled.
___
Heintz reported from Moscow. Associated Press writers Matthew Lee and Colleen Long in Washington and Mark Lewis in Stavanger, Norway, also contributed to this report.