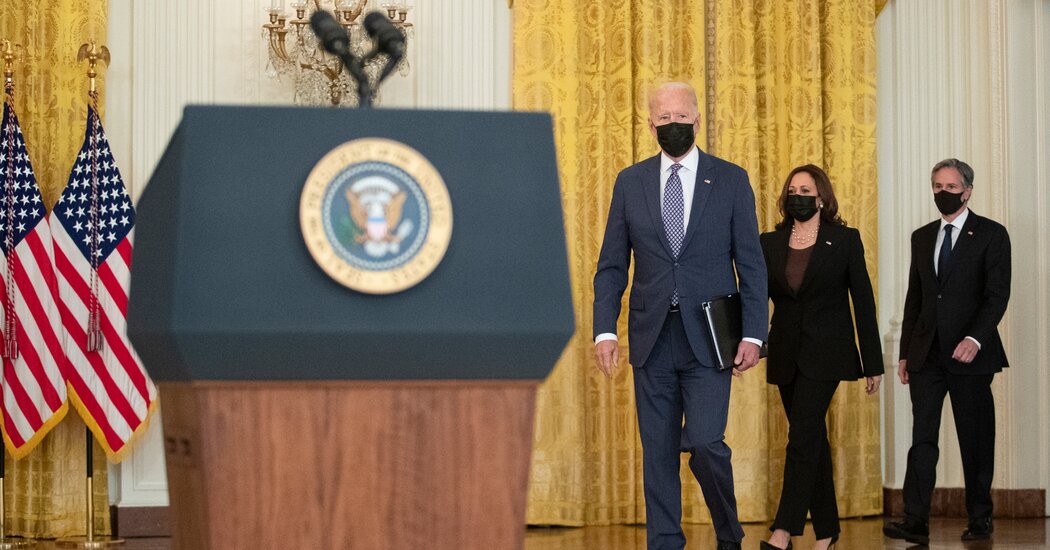 President Biden, in remarks on Friday, vowed to evacuate all Americans out of Afghanistan and defended his administration from criticisms over the withdrawal.

But in doing so, he made several misleading or false claims about the pullout and evacuation, which have been chaotic as Americans and tens of thousands of Afghan allies try to flee through the airport in Kabul.

Hereâ€™s a fact-check of the presidentâ€™s remarks.

â€œI have seen no question of our credibility from our allies around the world.â€

This is misleading. While leaders of countries allied with the United States have been hesitant to publicly criticize the withdrawal, some members of their governments have not minced words in questioning American leadership and credibility.

In Germany, the chairman of Parliamentâ€™s Foreign Relations Committee called the withdrawal â€œa serious and far-reaching miscalculation by the current administrationâ€ and said it did â€œfundamental damage to the political and moral credibility of the West.â€ Armin Laschet, the head of Chancellor Angela Merkelâ€™s conservative party and a candidate in the election to succeed her, called it the â€œbiggest debacleâ€ that NATO had ever seen. Ms. Merkel also criticized it privately, according to German news media reports.

In Britain, the pullout has raised doubts among some officials about the reliability of the United States as an ally. Tom Tugendhat, a Conservative member of Parliament and the chairman of the Foreign Affairs Committee, characterized it the â€œbiggest foreign policy disasterâ€ since the 1956 Suez crisis, saying that â€œwe need to think again about how we handle friends, who matters and how we defend our interests.â€

False. Al Qaedaâ€™s presence in Afghanistan has certainly been reduced since the United States invaded, but Mr. Biden is wrong to say that the terrorist group is no longer in the country.

A United Nations Security Council report released in June estimated that Al Qaeda still had a presence in at least 15 of Afghanistanâ€™s 34 provinces. The Defense Departmentâ€™s Office of Inspector General said in a report released on Wednesday that â€œthe Taliban continued to maintain its relationship with Al Qaeda, providing safe haven for the terrorist group in Afghanistan.â€

After Mr. Biden spoke, John F. Kirby, a Pentagon spokesman, confirmed in a news conference that Al Qaeda had a presence in Afghanistan.

â€œWe have no indication that they havenâ€™t been able to get â€” in Kabul â€” through the airport. Weâ€™ve made an agreement with the, with the Taliban. Thus far, theyâ€™ve allowed them to go through. Itâ€™s in their interest for them to go through. So, we know of no circumstance where American citizens are â€” carrying an American passport â€” are trying to get through to the airport.â€

This is misleading. Reports from Afghanistan contradict this statement, and other government officials have been more cautious when describing the conditions for American citizens traveling to the airport.

Who are the Taliban? The Taliban arose in 1994 amid the turmoil that came after the withdrawal of Soviet forces from Afghanistan in 1989. They used brutal public punishments, including floggings, amputations and mass executions, to enforce their rules. Hereâ€™s more on their origin story and their record as rulers.

Who are the Taliban leaders? These areÂ the top leaders of the Taliban, men who have spent years on the run, in hiding, in jail and dodging American drones. Little is known about them or how they plan to govern, including whether they will be as tolerant as they claim to be.

What happens to the women of Afghanistan? The last time the Taliban were in power, they barred women and girls from taking most jobs or going to school. Afghan women have made many gainsÂ since the Taliban were toppled, but now they fear that ground may be lost. Taliban officials are trying to reassure women that things will be different, but there are signs that, at least in some areas, they have begun to reimpose the old order.

Asked about Mr. Bidenâ€™s claim that no American had been denied access to the airport, Ned Price, a spokesman for the State Department, said in a news conference on Friday that the department â€œhas received only a small number of reports from American citizens that their access has been impeded in some way, that they have faced any sort of hardship or resistance, getting to the airport.â€

Politico reported that Defense Secretary Lloyd J. Austin III told Congress on Friday that some Americans trying to leave Afghanistan had been harassed and beaten by Taliban fighters.

An unnamed American resident in Afghanistan told ABC News that he had witnessed people holding U.S. passports not being allowed through Taliban checkpoints. Clarissa Ward, a CNN reporter in Kabul, said after Mr. Bidenâ€™s remarks that she had difficulty reaching the airport.

â€œWorking how to get to this airport is like a Rubikâ€™s Cube,â€ Ms. Ward said on CNN on Friday. â€œAnyone who says that any American can get in here is â€” yes, I mean, technically, itâ€™s possible. But itâ€™s extremely difficult, and it is dangerous.â€