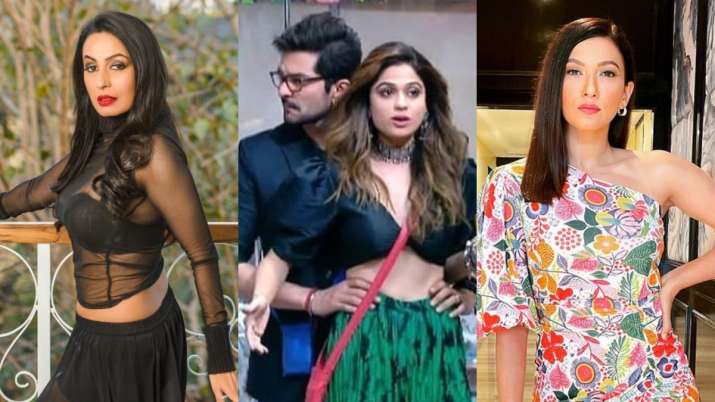 Bigg Boss OTT, the online version of the controversial reality, has entered its final week. Hosted by popular filmmaker Karan Johar, the show has been streaming on Voot for the last five weeks. The show will close the curtains with its grand finale this weekend. During the last phase, contestants including Divya Agarwal, Shamita Shetty, Raqesh Bapat, Nishant Bhat and Pratik Sehajpal who have reached the final week are under the radar of constant judgement. Former Bigg Boss contestant’s Kashmera Shah and Gauahar Khan expressed their opinions on contestant Raqesh Bapat. The two actress’ criticised the actor for not standing up for his “lady love.”

During an interview with Times Of India, Kashmera Shah revealed that while she likes Raqesh Bapat as a contestant, she doesn’t like him on Bigg Boss OTT because he refuses to take a stand for Shamita Shetty. She said, “I feel Raqesh is not very vocal about his feelings and what he wants to say. I even tweeted about it this morning, regarding the last debate task in the house. He didn’t take a stand or give his view while the entire task was about that. I think Raqesh has no game of his own and I don’t support people who sit on the fence. I like him as a person on screen and would like to watch him on TV and films, but not on a reality show. He is the kind of a person who does not speak his mind on the show but would talk about it after getting back home.”

For those who don’t know, recently Kashmera was involved in a Twitter spat with Raqesh’s ex-wife Ridhi Dogra. In the Sunday Ka Vaar episode, Raqesh who is close to Shamita Shetty inside the Bigg Boss OTT house, also shares a good bond with co-contestant Divya Agarwal was seen taking her name when answering difficult questions. Seemingly he did so to steer clear of any conflicts with Shamita. Sharing a video of the same, Kashmera took a dig at the actor writing, â€œCongratulations @RaQesh19, you are on your way to becoming a henpecked husbandâ€¦ again.” (sic)

Ridhi Dogra who was earlier married to Raqesh was seemingly upset with Kashmera’s tweet. Hitting out at the actress, Ridhi called out Kashmera for making â€œa loose comment.”

â€œAgain? Excuse me. Kindly donâ€™t make loose comments. Peace out,” she wrote in response to Kashmera’s tweet.Â To that, Kashmera tweeted, “Ok then @ridhidogra on his way to becoming a henpecked husband for the first time @RaQesh19 peace out ex wife.”

On the other hand, Gauahar Khan took to Twitter and called out Raqesh. â€œWhat a let down , raqesh !!!!! Plssssss Shamita u deserve better than a man who canâ€™t even chose u in a finale week debate ! Competition is great ! Pls I hope u keep it to that ! How sad !”, she had tweeted.Â