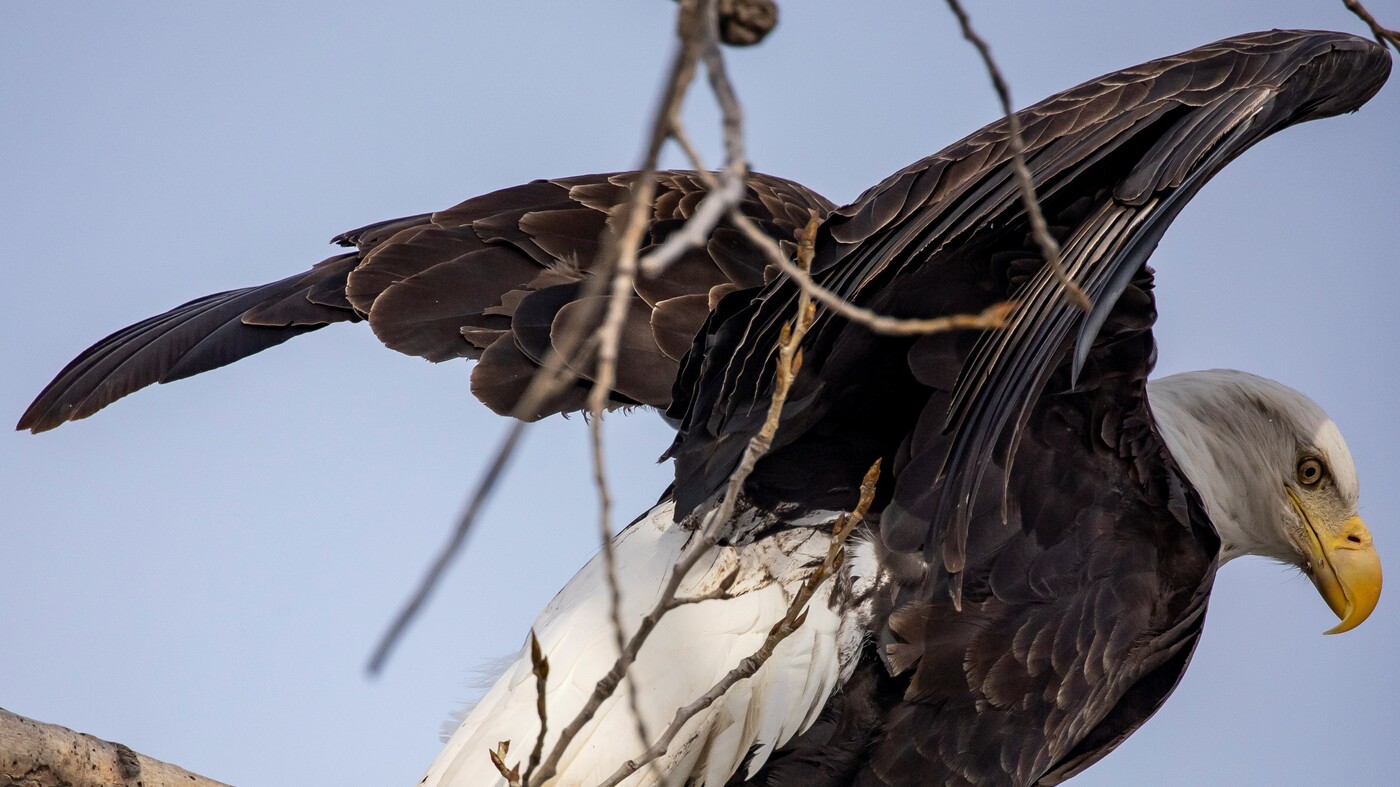 A bald eagle perches on a tree at Sunset Park in Rock Island, Ill., in March. A new study says that many species of birds increasingly moved into urban areas as human activity waned during the pandemic.

A bald eagle perches on a tree at Sunset Park in Rock Island, Ill., in March. A new study says that many species of birds increasingly moved into urban areas as human activity waned during the pandemic.

“Anthropause” is a word scientists have coined to describe the scaling back of human activity since the beginning of the COVID-19 pandemic. While it’s probably safe to say most people have found it uncomfortably restrictive, a new study published Wednesday suggests the pandemic has allowed many bird species to stretch their wings.

As people remained indoors, stopped commuting to work or hopping on passenger jets, the birds increasingly flew into urban areas they had previously shunned, according to findings published in Science Advances.

Michael Schrimpf, a postdoctoral fellow at the University of Manitoba’s Natural Resources Institute, and his colleagues used information gathered on eBird, the Cornell Lab of Ornithology’s online database of detailed bird sightings reported by citizen scientists. They compared records of sightings of 82 bird species, a total of 4.3 million individual birds, in Canada and the United States from March through May 2020 — when many cities were in full coronavirus lockdown — with the same period for 2017 through 2019.

“Everything from birds like hawks and eagles all the way down to small songbirds and even hummingbirds,” Schrimpf tells NPR.

Sightings were up, even though there are billions fewer birds

They found bird sightings increased near roads and airports during the pandemic. Overall, 80% of the bird species studied showed changes in their counts in urban areas in the 2020 time frame — with most of them increasing on the order of 10% to 20%.

He says, “What did change was the activity of people in those spaces.”

Schrimpf explains that the results don’t suggest greater numbers of actual birds, but that “the birds that people were seeing were basically birds that would have been in other places instead showed up in places that are more regularly trafficked by people.”

In fact, an estimate published in 2019 concluded that North America has lost about 3 billion birds since the 1970s, or nearly a third of all breeding birds.

Not all species saw upticks

In the latest research, just over a quarter of the bird species studied showed mixed trends, with a few, such as house sparrows and the type of pigeon typically seen around cities, spotted less often in urban areas during the pandemic.

Another caveat: It’s possible that birds moved into some areas during the pandemic because they were relatively quiet and free from human activity. But as Schrimpf explains, “if a bird shows up there, but it didn’t come along with, say, the right kind of food … or if a predator like a coyote or a raccoon was also attracted to those areas because of lack of activity, what looks like a haven for a bird might wind up being a dangerous place.”

The trend noted in the latest study is not just for the birds either. A paper published last year in Nature noted: “Anecdotal observations indicate that many animal species are enjoying the newly afforded peace and quiet, while others, surprisingly, seem to have come under increased pressure.”

Birds might prefer the shift to work from home

It’s difficult to say what will happen once the pandemic and the lockdowns are finally over, but Schrimpf says he is hopeful.

“We hope that it might be a lesson for us that we can take away in a post-pandemic world,” he says, suggesting that people who prefer to continue working remotely might even use “helping the birds” as a rationale.

“I think that there is an opportunity to adjust how we live, to slow down,” he says. “For example, if people that could work from home, maybe not all the time, but you know, a couple of days a week, that could reduce our human activity.”

Covid ‘vaxathon’: over 2.5% of New Zealanders get jabbed in one day

Long Covid: what are you entitled to if you can’t work in the UK?