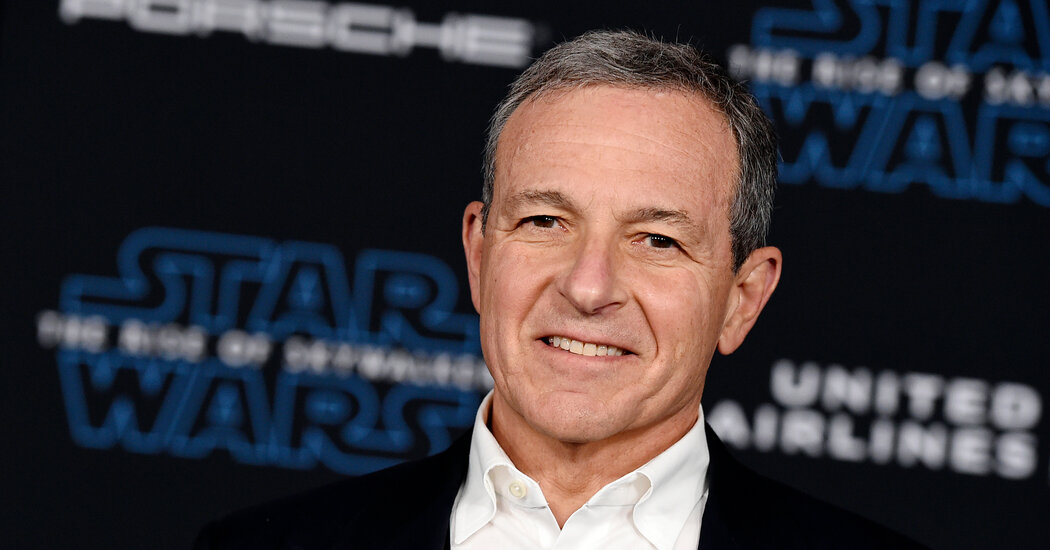 It was part pep rally and part therapy session: For 45 minutes on Monday, Robert A. Iger stood inside a film soundstage in Burbank, Calif., and fielded questions from Disney employees about the company’s dramatic turn from Hollywood juggernaut to streaming-era cautionary tale.

Are you going to sell Disney to Apple? Will our hiring freeze remain in place? Do traditional TV businesses like the Disney-owned ABC have a future?

“These are challenging times, and I feel that now that I have assumed this role again,” Mr. Iger said, according to four Disney employees who attended the town hall, two of whom provided The New York Times with audio recordings of the event. “There is a lot we have to do and quickly.”

Mr. Iger downplayed chatter that Disney was potentially seeking safety in the arms of Apple as “pure speculation” and said cost cutting efforts, including a hiring freeze, would remain in place.

“If you look long term at the future of linear TV, it would be wise to be skeptical or pessimistic about it,” Mr. Iger said, exhibiting some of the trademark candor that has always made him stand out as a Hollywood executive. “How that manifests itself in our company I don’t know.”

The Race to Rule Streaming TV

Mr. Iger, 71, retired as Disney’s chief executive in 2020 after a celebrated 15-year run, but was rehired on Nov. 20 after the company’s board fired his hand-selected successor, Bob Chapek. After enduring a tumultuous year marked by executive firings, a plunging stock price, demands by activist investors and attacks from conservative pundits and politicians, Disney employees seemed overjoyed to see Mr. Iger, according to the attendees, who spoke on the condition of anonymity to discuss a private event.

Wearing a cardigan and crisp white shirt with no tie, Mr. Iger came onstage to extended applause. He quipped that the welcome — and the realization of how much work was in front of him — had him on the edge of tears. (The crowd gave him a standing ovation when the town hall concluded.)

Since the surprise ouster of Mr. Chapek, 62, a little more than a week ago, additional changes have come rapidly at Disney. Mr. Chapek, for instance, had restructured the company to give priority to its streaming services (Disney+, Hulu and ESPN+). In doing so, Mr. Chapek took away distribution and profit-and-loss responsibility from the executives who run Disney’s movie and television studios. Mr. Iger promptly set about putting the old structure back in place.

Also last week, Mr. Chapek’s top lieutenant, Kareem Daniel, was shown the door, as was Arthur Bochner, who helped write Mr. Chapek’s prepared comments on earnings conference calls and previously served as his chief of staff. In what was viewed as a petty move, someone removed a tribute to Mr. Chapek from the side of a small themed building at Castaway Cay, a Disney-owned island in the Bahamas that serves as a Disney Cruise Line activity port.

Mr. Iger did not mention Mr. Chapek by name on Monday. But Mr. Iger’s repudiation of his tenure was clear.

“It’s not about how much we create about how great the things are that we do create,” Mr. Iger continued, perhaps in a swipe toward the avalanche of content that Disney and other media companies have been dumping on streaming services to drive subscription growth.

One employee asked about Disney’s commitment to L.G.B.T.Q. storytelling going forward. In the spring, Disney became a political piñata among conservative pundits, partly because it had started to add openly gay, lesbian and queer characters to its animated movies.

“One of the core values of our storytelling is inclusion and acceptance and tolerance, and we can’t lose that,” Mr. Iger said.

At one point, Mr. Iger referenced the song “What’d I Miss?” from the musical “Hamilton,” in which Thomas Jefferson returns to the United States from France and sings, “There is no more status quo, but the sun comes up and the world still spins.”

“That’s how I feel,” Mr. Iger said. “The status quo is gone. A lot has changed. But the sun is still shining, and our world and our Disney world is still spinning.”