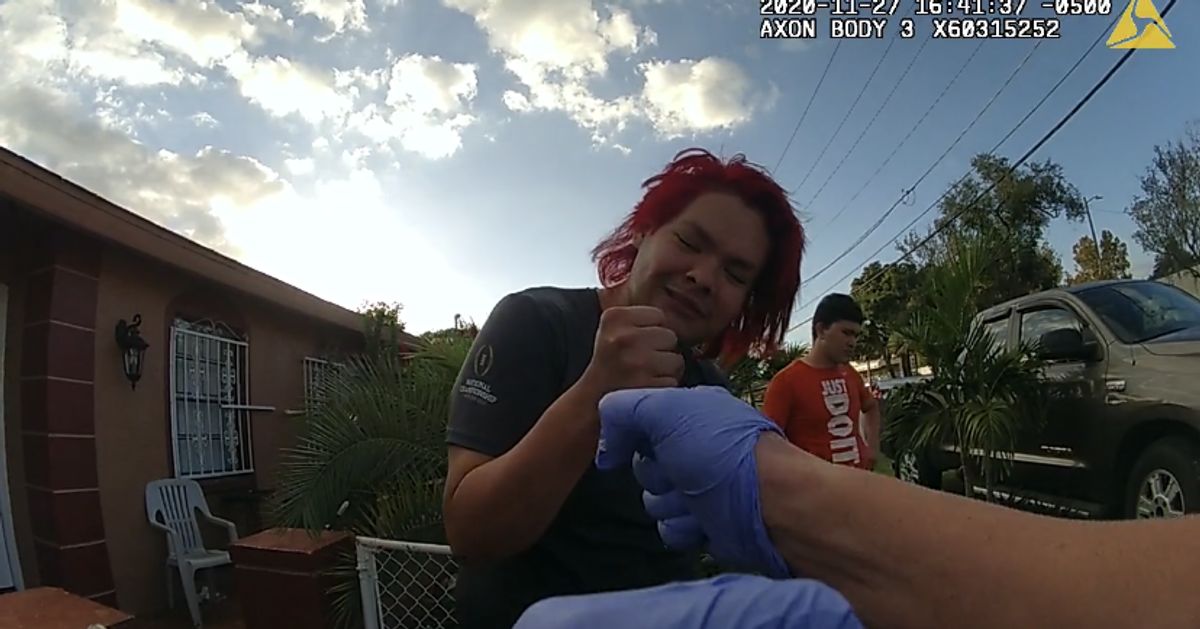 Nearly two years ago, a Florida sheriff’s department arrested and charged a transgender woman with battery and resisting an officer. The department said Jenny DeLeon knocked a deputy off balance during a fight in November 2020.

But body camera footage recently obtained by HuffPost casts the incident in a much different light. It shows Sean Bush, a deputy from the Hillsborough County Sheriff’s Office, choking DeLeon and slamming her to the ground. Other deputies who arrived at the scene shackled DeLeon while pinning her to the ground.

The case drew little public attention in 2020. DeLeon, 24 at the time, was sentenced to 30 days in jail after receiving credit for time served.

Almost exactly one year after that arrest, DeLeon was fatally stabbed — the fourth transgender woman killed in Florida that year, during a record year of violence nationwide against transgender and gender nonconforming people. A suspect was arrested in DeLeon’s murder case in March.

Katherine Viker, a Tallahassee-based attorney, said her office requested the footage of DeLeon’s arrest while investigating a separate incident of excessive use of force involving another deputy in the department. Viker’s office is not representing DeLeon’s family in any capacity.

“We learned of this encounter and we are shocked by what he saw,” Viker told HuffPost in a statement.

WARNING: Violent arrest photos and video are visible below.

The Hillsborough County Sheriff’s Office has denied any wrongdoing in DeLeon’s arrest and said Bush’s choking of DeLeon was an accident.

Bush received a letter of reprimand and mandatory training, a response that the sheriff’s office says it stands by.

“Following review of body-worn camera video, HCSO launched a thorough and timely internal investigation,” an HCSO spokesperson said in a statement last week. “It was determined that while responding to the domestic violence incident, the suspect continuously refused to follow commands on scene and was physically combative with the deputy. The suspect grabbed the deputy’s wrist, throwing him off balance, and at that time, the deputy unintentionally briefly used techniques that are not in line with HCSO’s procedures.”

The sheriff’s office’s investigators said DeLeon appeared to be intoxicated while interacting with Bush but that there was no clear indication that she posed a physical threat to anyone.

What The Uncovered Footage Shows

On Nov. 27, 2020, Bush responded to a report of a domestic dispute and found DeLeon and other people standing outside a residence in Town ‘n’ Country, Florida, a Tampa suburb.

The bodycam footage shows DeLeon greeting Bush with a fist bump and asking him why he is there. DeLeon turns around and asks people nearby if they called Bush to the home. Bush asks DeLeon to have a seat, but she responds that he’s on her property.

DeLeon then asks Bush to return to his car, saying no one called him to the home, before asking him to come back but to give her six feet of space due to coronavirus risks. She gives Bush a second fist bump.

“You’re so awesome. Thank you for your service,” DeLeon is recorded saying to the deputy before the two are quiet for a few seconds.

Bush then steps in the direction of a vehicle parked outside the house, and DeLeon raises her arm and asks him not to touch the vehicle because of the coronavirus. Bush says, “Don’t touch me” and takes DeLeon to the ground, grabbing her arm, shirt and neck.

DeLeon, who is unarmed, tries to get up, but Bush grabs her by the neck again and pulls out his stun gun. DeLeon repeatedly shouts, “I’m epileptic!” as Bush uses the stun gun on her.

Bush shouts at DeLeon to put her hands behind her back again, then strikes her with the stun gun a second time.

“You’re coming to my house, but nobody called you,” DeLeon protests in the footage. “You’re on my property and nobody said they called you.”

Two other deputies soon arrive at the scene, and one kneels on DeLeon. Bush can be heard in the video making a derogatory, transphobic statement about DeLeon.

“Just keep whatever it is down,” he can be heard saying in reference to DeLeon.

Deputies handcuff DeLeon’s legs and wrists together as more deputies and a medic arrive.

They tell DeLeon several times to “stop resisting,” and she replies that she isn’t.

On Nov. 30, 2020, another deputy in the Hillsborough County Sheriff’s Office requested an internal investigation into Bush’s actions during DeLeon’s arrest and alleged that the deputy had used derogatory language and excessive force, according to documents obtained by HuffPost. The investigation began on Dec. 2, 2020, and was completed the following month.

Bush received a standards letter on March 1, 2021, which HuffPost has obtained. It says the investigation found no evidence of Bush making derogatory remarks or of the deputy using “excessive or unnecessary force,” but it acknowledges that Bush grabbed DeLeon by the throat. The letter calls the chokehold “brief and unintentional,” noting that such a response “was admittedly not part of any training Deputy Bush has received as a member of the Sheriff’s Office.”

Bush has remained active with the department.

The sheriff’s office claims in other documents that DeLeon had grabbed Bush by the wrist, causing the deputy to “lose his balance,” and had pushed Bush.

After the incident, DeLeon was charged with battery, battery on a law enforcement officer, depriving an officer of means of protection or communication, and resisting an officer with violence, according to court records.

Viker pushed back on the department’s narrative about the arrest and said the deputies present had not been held accountable.

“You see the video; what they said happened compared to what actually happened is not true,” Viker told HuffPost. “The video is the best representation of what actually occurred. Videos don’t lie.”

Watch the body camera footage of DeLeon’s arrest below.