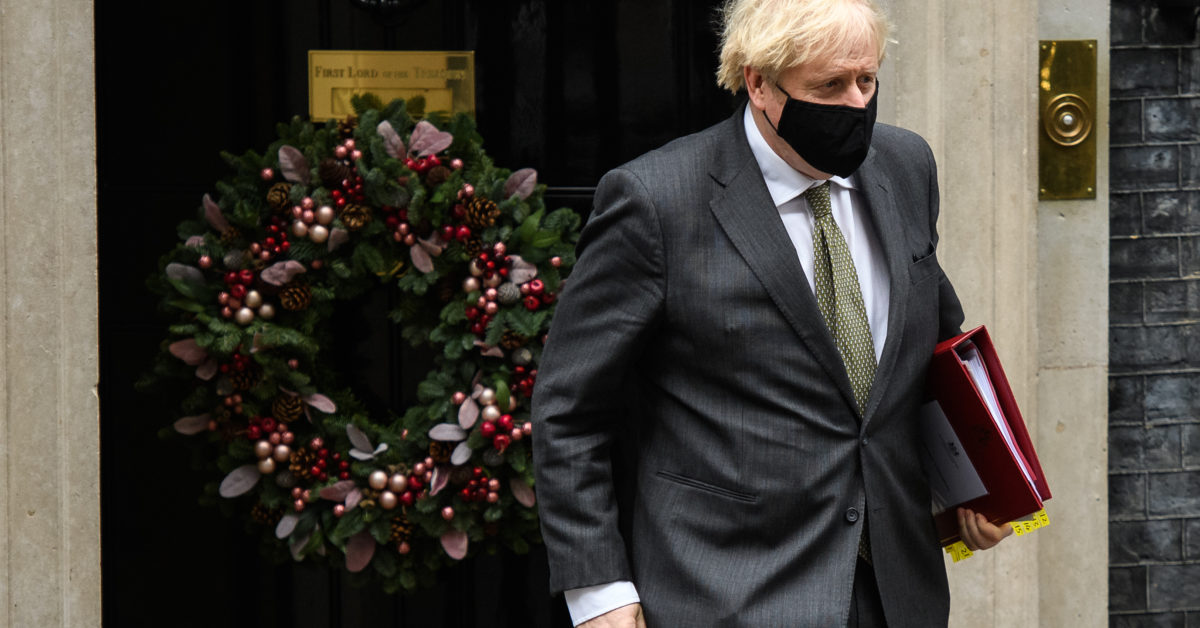 LONDON â€” It really hasnâ€™t been Boris Johnsonâ€™s year. But, despite everything, heâ€™s still looking for the upside.

The U.K. prime minister ends 2020 â€” a year he predicted would be â€œfantastic for Britainâ€ â€” having effectively canceled Christmas for millions following an upsurge of COVID-19 cases, an upsurge driven by a new variant of the virus that has prompted more than 40 (and counting) countries to close their borders to arrivals from the U.K.

Compounding the countryâ€™s difficulties, nearest neighbor France not only barred U.K. travelers for 48 hours, but also British freight when accompanied by a driver, prompting Johnson to chair an emergency meeting of the governmentâ€™s crisis committee Monday to address potential disruption to the flow of food into the U.K. And thatâ€™s before we even get to the end of the post-Brexit transition period, when trade rules with the EU will change, throwing up barriers overnight on New Yearâ€™s Eve.

Johnson spoke to French President Emmanuel Macron about Parisâ€™s decision Monday afternoon, and told a Downing Street press conference shortly after that both governments wanted to resolve the border issues â€œin the next few hours if we can.â€ The ElysÃ©e simply said the two teams would stay in touch.

He also stressed the U.K.â€™s continued commitment to an international response to the pandemic, a counter to some who have criticized his handling of the emerging coronavirus variant â€” referred to by Italian national paper La Repubblica on its front page as â€œil virus ingleseâ€ [the English virus.]

â€œTo our international friends and partners I want to say very frankly:Â we understand your concerns,â€ said Johnson. â€œAnd I hope that everybody can see that as soon as we were briefed as a government of the fast transmissibility of this new strain at about 3.15 p.m. on Friday afternoon, we lodged all the necessary information with the World Health Organization.â€

He insisted the U.K. wanted to continue to play â€œour full partâ€ in the global COVID response, and pointedly highlighted the countryâ€™s status as the first in the world to have its vaccine program up and running, announcing that 500,000 people have now received their first dose of the Pfizer/BioNTech jab. Â

Confronted with repeated questions about his own pattern of over-promising and under-delivering during this miserable pandemic year, the prime minister who spoke of a â€œsignificant return to normalityâ€ by Christmas responded with undimmed boosterism. â€œNow that weâ€™ve got the vaccine coming â€¦ we can certainly look forward to a very, very different world for this country from Easter onwards,â€ he said.

This time, he may be right â€” but the risk for Johnson is that people simply stop believing him.

The U.K. has also faced criticism in some quarters for only notifying international allies about the strain in the past few days. Walter Ricciardi, a consultant to the Italian health minister, told the Rome-based daily Il Messaggero that â€œtheÂ British had known since September that this variant was in circulation. They keptÂ itÂ quiet, they didnâ€™t warn us.â€

The accusation isnâ€™t entirely fair. In October, the U.K. traced the new strain back to a test taken in September, but it was only circulating at very low levels until late November, the government said, and evidence of its increased transmissibility was only presented to the governmentâ€™s New and Emerging Respiratory Virus Threats Advisory Group (NERVTAG) â€” and then to ministers â€” on Friday.

While some U.K. Brexiteers â€” including Brexit Party Leader Nigel Farage â€” chose to ramp up tensions by linking the European response (in particular French actions) to sore relations over Brexit, the U.K. government itself did not entertain such an interpretation. â€œWeâ€™re continuing to work closely with our international partners as has been the case throughout the pandemic,â€ Johnsonâ€™s spokesperson said. They added: â€œWe donâ€™t think that [Brexit] is the reason [for the French response].â€

The latest disruption comes in a bleak Christmas week for Britain. The country recorded another 33,364 cases of the virus on Monday, up from just over 20,000 the previous Monday. In rare positive news, there is no evidence so far that the new strain causes more severe illness, or will not respond to vaccines.

U.K. Chief Scientific Adviser Patrick Vallance, standing alongside Johnson at the Downing Street press conference Monday, said however that early indications it spreads â€œsubstantiallyâ€ more easily than previous strains had only been reinforced by further analysis carried out over the weekend.

Partly as a result, he added, the U.K. would likely have to face even tougher restrictions to bring its epidemic back under control. â€œItâ€™s likely this will grow â€¦ and itâ€™s likely, therefore, that measures will need to be increased in some places in due course and not reduced.â€

London and much of the south east of England are already under strict new lockdown measures. On Monday, Greater Manchester asked anyone traveling to the city from these areas, or from Wales, to self-isolate for 10 days. Scotland has already prohibited travel to and from the rest of the U.K. for all but essential reasons.

The prospect of even more widespread restrictions â€” alongside potential Brexit disruption â€” means it is shaping up to be a very bleak end to a less than fantastic year â€” for Johnson and the U.K.