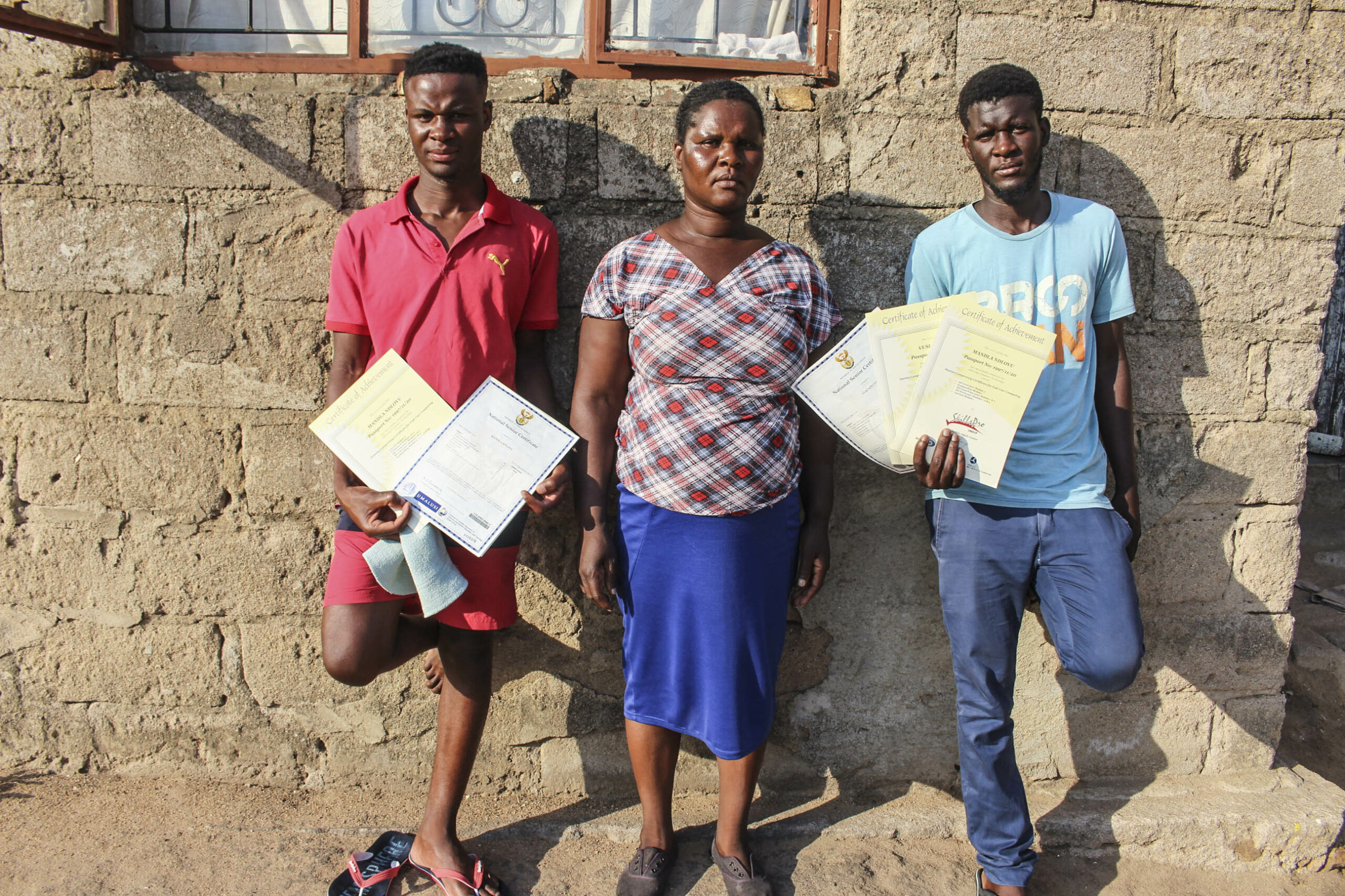 Thulani Vuma, who lives in Sabie in Mpumalanga, cannot continue with his studies because he does not have an identity document. Even though he was born in the country 22 years ago, to a Mozambican mother and South African father, his attempts to obtain documentation have been in vain. He completed his grade 12 last year at Memezile Secondary School in Sabie and had hoped to become a genetic engineer.

Vuma is one of the thousands of Mpumalanga’s stateless young people who cannot further their studies. Stateless citizens are people born in one country of a parent or parents who are from another, but do not have documentation to prove their place of birth.

Most undocumented people in Mpumalanga are descendants of those who fled Mozambique during the civil war that engulfed that country from 1977 to 1992, after the country attained its independence from Portugal in 1975.

“I failed to continue with my studies because I don’t have documentation,” said Vuma. “My mother and I have visited different home affairs offices trying to get an identity book, but they turned us down.”

“I am stressed because I passed grade 12 with flying colours and I wanted to study science-related studies or genetic engineering. At school, I was one of the best students when it comes to science and technology. I thought it was my vehicle to the future, [but] little did I know that I won’t be able to further my studies.

“This problem is going to affect me and my siblings for the rest of our lives because we cannot do anything without the documents. My elder brother has also passed his grade 12 and faces the same problem,” he added.

Vuma says his mother was born in Mozambique but his father is South African and their children grew up in South Africa. “This is the only country we know and it is our home. That is why we appeal to the government or any institution that has the power to assist us to deal with this documentation problem.”

Vuma and his siblings are struggling to make ends meet because their mother is the only one in the family who is employed. Carlota Vuma, 56, arrived in South Africa in the 1970s with her parents, but has also not been able to obtain a South African identity book.

She says her dream is to see her children being registered as citizens of this country and being able to live a normal life like any other young person.

“I am worried, I don’t even sleep at night thinking that all my children will grow up and live in poverty. These people were born here like any other children, but they are being deprived of their rights. I raised them so hard [with difficulty] and now the firstborn, who is 24, is supposed to be assisting me to raise his siblings. He is also failing to get a job because he does not have an ID. He also failed to continue with his studies because of this problem.”

Thulani Vuma is not alone.

Vusi Ndlovu, 24, of Lilydale in Bushbuckridge, Mpumalanga, is another young person struggling to find a job or to further his studies because he has no documents. The rest of his family have the same problem, including Ndlovu’s twin brother Mandla, who is stuck at home with no prospects despite passing grade 12 with flying colours.

Ndlovu, who lives with his siblings and their mother, who is a domestic worker, says everywhere he goes, doors are being closed because he has no ID.

“Times are hard. We have interacted with a lot of government officials, especially those from home affairs trying to get help, but we did not win,” he said.

“This is a serious issue because many people are facing the same problem in the country. Every time we went to the home affairs offices in Hazyview, Bushbuckridge and Mhala, they failed to assist us. I can’t blame the officials for failing to assist because only the government can come up with a law that can accommodate us. If this problem is not being attended to, we will see generational poverty in many families.”

Ndlovu and other young people recently wrote to Lawyers for Human Rights (LHR) and the Human Rights Commission’s Mpumalanga office pleading for help.

“We are asking for your urgent intervention so that we can get documentation and be able to further our studies and participate in the country’s economy. Please forward the letter to other relevant stakeholders who might be of help. We were born here and the only place that we know is South Africa,” they said in the letter sent to LRH.

LHR legal researcher Tshegofatso Mothapo confirmed receipt of the letter and undertook to try and get to the bottom of the matter.

“We will talk to them to establish more information about their problem, and then we will take it from there. For example, if their fore­fathers are registered in Mozambique or other countries then chances are that they can also obtain documentation in that country,” she said.

According to Mothapo, section 20 of the Constitution states that no citizen may be deprived of their citizenship, and section 28(3) says every child has a right to a name and nationality.

The majority of queries received by the LHR are about the lack of birth registration, blocked IDs and the home affairs department’s failure to apply naturalisation or permanent residence mechanisms, she said.

“The effects of statelessness can be severe as it can adversely influence a person’s ability to access basic human rights and to participate fully in the economic, social and political life of a country they live in and consider home. Nationality is an entry point to access other rights and is described as the right to have rights,” Mothapo added.

The Scalabrini Centre in Cape Town is one of a number of organisations advocating for the rights of stateless people and immigrants and has been trying to convince the government to amend the regulations to the Birth and Death Registration Act to ensure that children born in the country get birth certificates and are regarded as South Africans regardless of their parents’ nationality.

Another problem undocumented people have is being sidelined during the Covid-19 vaccination roll-out.

“All my friends were vaccinated, and now they are not comfortable hanging out with me because I’m not vaccinated. When I checked all the requirements I realised that they will not allow me to get vaccinated. My whole family is not being vaccinated because we all don’t have identity documents,” said Sipho Khosa, of Masoyi near White River in Mpumalanga. “If you don’t have an identity document you are as good as dead because you can’t do anything.”

“We have started piloting vaccination of undocumented citizens and homeless people in Cape Town, Durban and Tshwane, this will be rolled out to other provinces,” said Mohale.

There are no statistics available on statelessness in South Africa. But, during a presentation to parliament’s portfolio committee on health a few months ago, Lawyers for Human Rights said there were more than 15-million unregistered or undocumented people in South Africa, of which almost three million were under the age of 18. This number comprises foreign nationals, stateless people and South African citizens who failed to obtain documentation for various reasons.

These include, but are not limited to, the right to education, employment and housing. It also guarantees stateless people a right to identity, travel documents and administrative assistance.”

When contacted for comment concerning the issue of undocumented people, the home affairs department’s spokesperson, Siyabulela Qoza, did not respond to questions sent to him and did not answer his phone.

But in a previous interview on the same issue, he said, “being born in South Africa by foreign parents does not guarantee you that you will automatically have documentation”.

According to the United Nations High Commissioner for Refugees (UNHCR), there were about 4.2-million stateless people globally in 2019. The UNHCR says the numbers of stateless people are not well documented and some countries only record half of the population, meaning the actual number might well be higher.

The UNHCR has recently vowed to support states in their responsibilities to address stateliness related problems. The entity has launched a global campaign to end statelessness by 2024.

The office of Mozambique’s high commissioner to South Africa, Paulino Macaringue, had not responded to queries on this story by the time of publication.