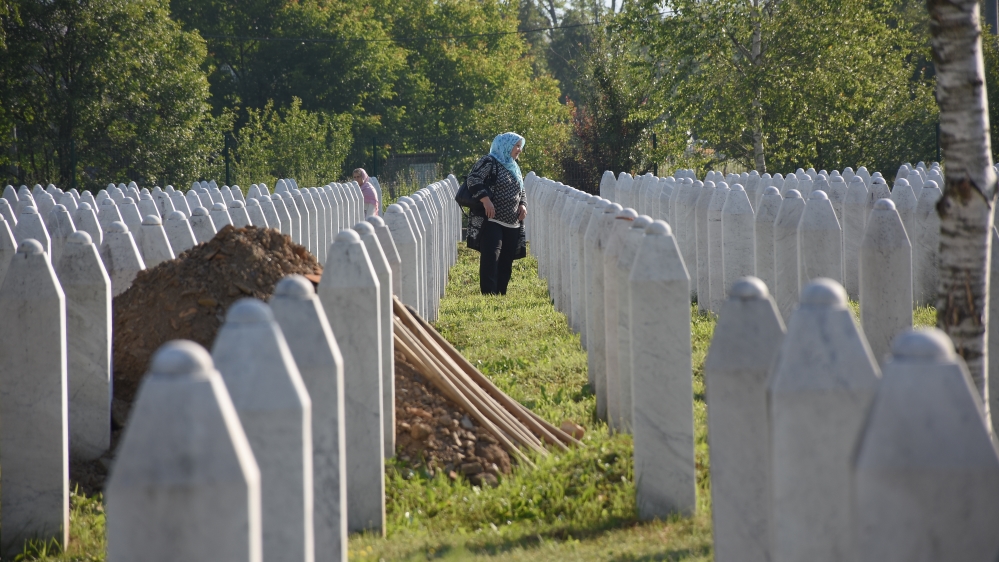 Bosnian Muslims are marking 25 years since the Srebrenica genocide, the worst atrocity on European soil since the end of the second world war, with the memorial ceremony sharply reduced due to the coronavirus pandemic.

The event marks July 11, 1995, the day when Bosnian Serb forces marched into Srebrenica, a Muslim enclave on Serb territory in Bosnia and Herzegovina that had been under theÂ UN protection.

After capturing the ill-fated town, Serb forces killed more than 8,000 Muslim men and boys in Srebrenica in a few days.Â So far, the remains of nearly 6,900 victims have been found and identified from more than 80 mass graves.

Bosnia had been embroiled in an ethnic war pitting the Serbs against Muslim Bosniaks and Croats between 1992 and 1995 that killed some 100,000 people.

Organisers on Saturday said the number of people attending the anniversary – normally in the tens of thousands – was lower than usual because of lockdown measures aimed at stemming the spread of COVID-19.

A daylong commemoration is under way atÂ Srebrenica in eastern Bosnia.

At 11:00 GMT, the remains of nine victims identified over the past year will be laid to rest at the memorial cemetery in Potocari, a village just outside Srebrenica that served as the base for the UN protection force during the conflict.

“Since this was a quarter-centuryÂ anniversary, it was initially planned that this should be a big memorial service honouring the victims but everything had to be scaled down because of the pandemic,” said Al Jazeera’s Tarik Durmisevic, reporting from the burial site in Srebrenica.

“The most important effect, however, is the number of victims who were supposed to be buried here. Some families couldn’t be here as they don’t live in Bosnia any more so they withdrew their consent for the burial.Â As a result, only nine victims of the genocide will find their eternal peace today.”

The Srebrenica massacre is the only episode of the Bosnian conflict to be described as genocide by the international community.

The European Union leaders called the anniversary “a painful reminder” that EuropeÂ failed in its promise to avoid such tragedy on the continent.

“We must confront the past with honesty and look to the future withÂ determination to support the next generations,” said a statement by the EU.

German Foreign Minister Heiko Maas on Saturday said Srebrenica stood for the atrocities and crimesÂ against humanity in the countries of the former Yugoslavia that wereÂ committed in the 1990s.Â  Â  Â Â

“The killings had taken place at the end of the 20th century in theÂ middle of Europe, almost under the eyes of the global public,” Maas said. “We must oppose nationalist tendencies wherever weÂ encounter them.”Â  Â Â

Bosnian Serb wartime military chief general Ratko Mladic, still revered as a hero by many Serbs, was sentenced to life in prison by a UN court in 2017 over war crimes, including the Srebrenica genocide. He is awaiting the decision on his appeal.

Radovan Karadzic, another Bosnian Serb wartime political leader, was also sentenced to life in prison by a court at The Hague.

Justice was already held up by Mladic’s long-running main trial. Now the pandemic has forced the war crimes tribunal to postpone the start of the appeal and delay the verdict until next year.

While for Bosnian Muslims recognising the scale of the atrocity is a necessity for lasting peace, for most Serbs – leaders and laypeople in both Bosnia and Serbia – the use of the word genocide remains unacceptable.

In the run-up to the anniversary, Serbian President Aleksandar Vucic described Srebrenica as “something that we should not and cannot be proud of”, but he has never publicly uttered the word, genocide.

Several thousand Serbs and Bosnians live side by side in impoverished Srebrenica, a small town in eastern Bosnia with just a few shops in its centre.

“We will tirelessly insist on the truth, on justice and on the need to try all those who have committed this crime,”Â Sefik Dzaferovic,Â the Muslim member of Bosnia’s joint presidency, said on Friday.

“We will fight against those who deny the genocide and glorify its perpetrators.”