Brazil Is The New Epicenter Of The Global Coronavirus Pandemic 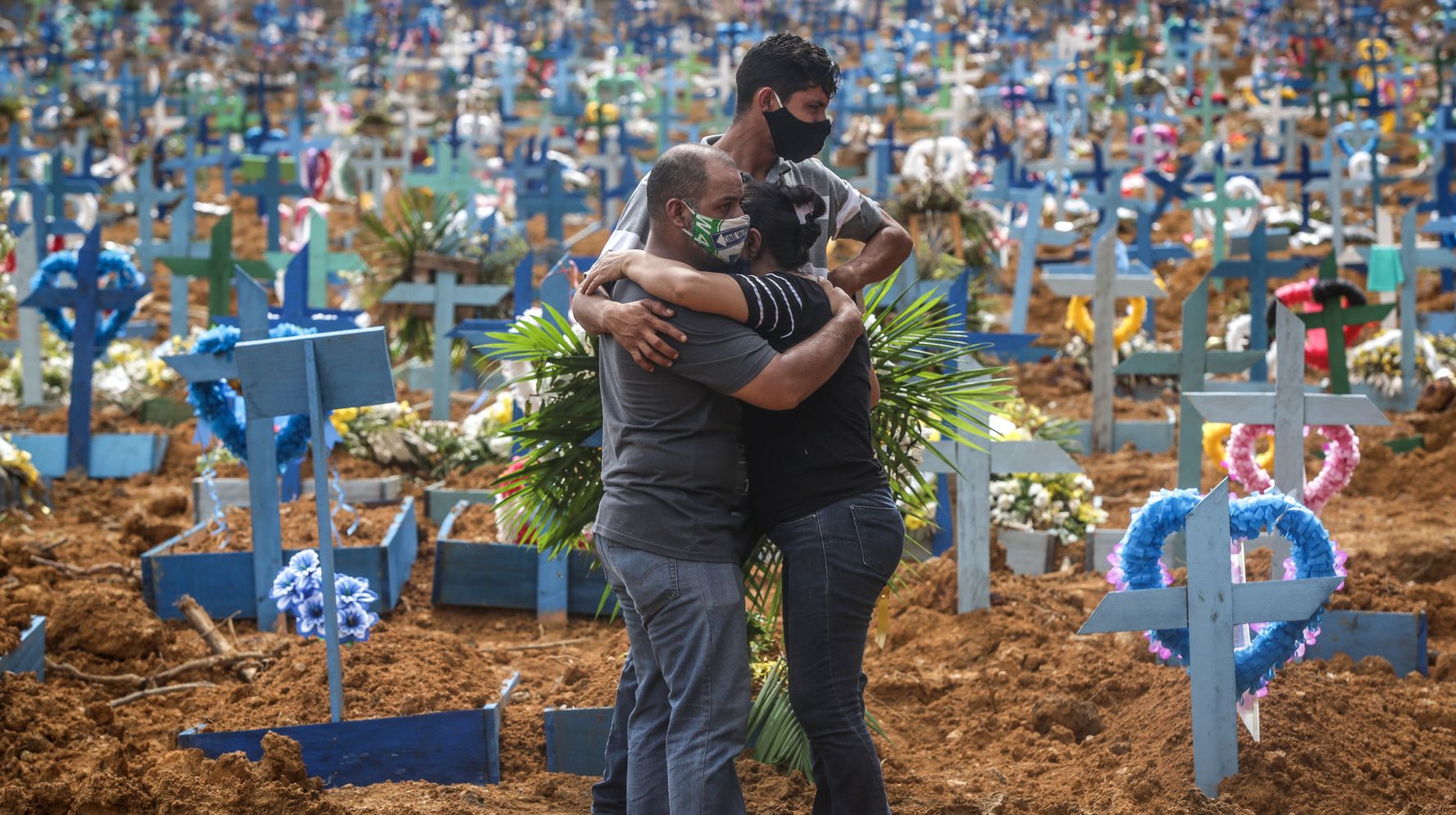 Brazilâ€™s novel coronavirus outbreak surged to cataclysmic levels on Tuesday afternoon when the country recorded 1,179 deaths from COVID-19 â€• a record daily high for a nation that now has more than 270,000 confirmed cases overall.

Brazil passed Italy and Spain on the list of countries with the most coronavirus cases last weekend, then passed the United Kingdom on Monday afternoon. Only Russia and the United States have more â€• although researchers have said that a lack of testing means Brazilâ€™s count is likely far higher than official figures suggest.Â

There are many factors that determine how bad a countryâ€™s outbreak becomes, but one unmistakable commonality between the three countries at the top is that their hard-right leaders have downplayed the severity of the crisis and embraced outlandish conspiracy theories, ensuring the outbreaks would be worse than they should have been.Â

In Brazil, President Jair Bolsonaroâ€™s lax response to the coronavirus made his countryâ€™s emergence as the worldâ€™s newest coronavirus hot spot tragically inevitable.Â

â€œEveryone whoâ€™s been watching Brazil, whoâ€™s been seeing the numbers increase day after day, week after week, knew that it was headed in this direction,â€ said Anya Prusa, a senior associate at the Woodrow Wilson Centerâ€™s Brazil Institute in Washington. â€œItâ€™s not a surprise, but it is a real humanitarian tragedy.â€

Deep social inequality and large populations already vulnerable to infectious diseases meant that limiting the spread of the coronavirus in Brazil required an aggressive response. Instead, Bolsonaro dismissed the pandemic as a media conspiracy and the disease as a â€œtiny flu,â€ fought with governors and state officials over social distancing measures, fired one health minister and drove another to quit, and largely left Brazilians â€• especially the poorest and most vulnerable â€• to fend for themselves.

â€œBrazil went into this with a number of challenges that have been exacerbated by the government response at the very top,â€ Prusa said. â€œIt is a disaster. And it didnâ€™t need to be a disaster of this size.â€

The disaster will likely only worsen in the coming weeks as Bolsonaro continues to downplay the pandemic. Brazilâ€™s state public health systems are reaching their breaking points. Its Indigenous populations have warned that a slow government response has put them further at risk as the virus spreads. Outbreaks in some of Brazilâ€™s poorest communities have been met by aggressive and deadly police crackdownsÂ rather than a robust public health response.Â

And as Brazil reaches the heights of its pandemic, it has no health minister â€• the oncologist who previously held the position quit last Friday, just 28 days into his tenure, after refusing to endorse Bolsonaroâ€™s efforts to expand the use of hydroxychloroquine, an anti-malarial drug that is not proven to work against the coronavirus, to treat infected patients.Â

The most dire predictions from the outset of Brazilâ€™s pandemic have come true, including one from the prior former health minister, Luiz Henrique Mandetta, who forecast that the virus could quickly inundate hospitals and state public health systems.

Photos of mass graves in the Amazon region have spread globally as the virus overwhelmed public health systems in poorer and financially strapped states. On Monday, SÃ£o Paulo Mayor Bruno Covas warned that the public hospitals in his city â€• the largest and wealthiest in Brazil â€• could reach their capacity by the end of May.Â

For the 1st time, Brazil adds more than a thousand deaths to the daily balance and now has 17,971 victims of Covid-19. Aerial view of Vila Formosa Cemetery

Joenia Wapichana, the first Indigenous woman elected to Brazilâ€™s national Congress, told HuffPost in April that the virus would spread rapidly once it reached Indigenous lands. But despite those warnings, government agencies were slow to deliver aid to Indigenous groups or to protect their lands, The Associated Press reported this week.

Illegal raids from miners, loggers and agribusiness interests have increased, despite government guidance to avoid Indigenous lands, as the pandemic and Bolsonaroâ€™s opposition to regulatory enforcement conspired to limit oversight from environmental agencies.Â

At leastÂ 38 Indigenous tribes now have confirmed COVID-19 cases, according to the Articulation of Indigenous Peoples in Brazil, the countryâ€™s largest tribal organization. The virus has killed 89 Indigenous Brazilians in the Amazon region, the group said in a statement this week that argued the actual number of infections and deaths among tribes is likely far higher than documented.Â

Indigenous leaders also worry that the pandemic could soon reach Brazilâ€™s isolated groups â€• those that have no known contact with outside communities â€• after a member of the isolated AwÃ¡ GuajÃ¡ people attacked a hunter from another tribe last week, according to the Forest Guardians, a group of tribal leaders that protects the Amazon rainforest from illegal incursions. The attack was likely the result of the AwÃ¡ GuajÃ¡ feeling increasingly threatened by outside invaders and accidentally targeting a member of a friendly tribe, the Forest Guardians said in a statement circulated by the nonprofit Survival International.Â

â€œIf you donâ€™t put an end to the invasions of our territory, the uncontacted AwÃ¡ GuajÃ¡ people will die,â€ the statement said. â€œOnce again, we are warning the Brazilian government and the international community that the AwÃ¡ GuajÃ¡ people are currently suffering a genocide.â€

Brazilâ€™s other potential hot spots wereÂ its dense pockets of poverty â€• the informal favelas of cities like Rio de Janeiro and the suburban periphery neighborhoods of SÃ£o Paulo and other metropolitan regions. Long victims of government neglect and stigma, many of those communities lack access to basic sanitation and health care, which, along with their small and tightly packed houses, leave them vulnerable to infectious disease outbreaks.Â

But favela residents have seen little help from the government as the pandemic worsens.Â

â€œThe word â€˜favelaâ€™ has not been heard from any government official,â€ Gilson Rodrigues, a favela leader in SÃ£o Paulo, said in a Facebook Live broadcast in March, Americas Quarterly reported. â€œWe need to organize and protect ourselves.â€

Favela residents across Brazil have organized to manufacture their own hand sanitizer, monitor residentsâ€™ health, and create news apps to combat the spread of misinformation about the virus.Â

But the governmentâ€™s response, at least in some parts of the country, has been to continue ramping up a deadly drug war.

In Rio de Janeiro, where Gov. Wilson Witzel, like Bolsonaro, is a supporter of hard-line public security tactics, police have continued to stage raids into favela neighborhoods to root out the drug gangs that operate within them. Rioâ€™s police, who are among the deadliest in the world and regularly wield extrajudicial force, killed at least 10 people in one such operation this week, according to community activists. During a Tuesday operation, police shot and killed a 14-year-old boy.

â€œThe world needs to know what is happening in Rio de Janeiro. The state of Rio de Janeiro, governed by [Witzel], is using pandemic isolation as a strategy for violent police actions,â€ Raull Santiago, a community activist in Rioâ€™s Complexo do AlemÃ£o favela, tweeted Tuesday. â€œThe [World Health Organization] says that to beat the coronavirus, we need to do social isolation. But police have been carrying out violent operations in the slums and putting us at risk of violent death.â€Â

The operations have alsoÂ drawn out crowdsÂ of angry and scared residents who oppose the tactics of a police force that killed nearly five people per day a year ago.

Bolsonaro dismissed the pandemic as a media conspiracy and the disease as a â€œtiny flu,â€ fought with governors and state officials over social distancing measures, fired one health minister and drove another to quit, and largely left Brazilians â€• especially the poorest and most vulnerable â€• to fend for themselves.

Bolsonaro has pushed states and cities to abandon social isolation measures and business closures in favor of kickstarting the economy, especially as the pandemic has left many Brazilians facing food shortages and little choice but to continue working, even as the pandemic worsens.

But if Brazil doesnâ€™t curb its outbreak, that will do little to boost economic growth.

â€œIf you donâ€™t contain the spread of the virus, then it doesnâ€™t matter what economic measures you use,â€ Prusa said.Â

Leaders in neighboring countries like Argentina and Paraguay have openly worried about how Bolsonaroâ€™s refusal to respond will affect their countries, where aggressive measures have limited outbreaks. Rates of deforestation, meanwhile, have continued to skyrocket in the Amazon during the pandemic, sparking fears that Brazil could experience an even worse fire season than it did in 2019 when record blazes and Bolsonaroâ€™s environmentally destructive policies made him a pariah on the world stage.

Bolsonaro has continued to ignore the devastation. On Tuesday, he met with the heads of two major Rio de Janeiro soccer clubs about efforts to restart Brazilâ€™s professional league.Â

Later, he sat for an interview with a prominent online journalist. Hours after Brazilâ€™s Ministry of Health reported more than 1,100 deaths, Bolsonaro cracked a joke about chloroquine.Â